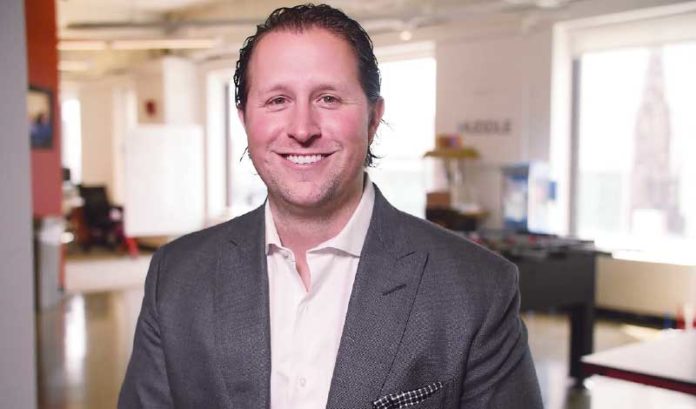 In most ways, 1Huddle looks like any tech startup aspiring to the sort of disruption brought over the years by well-known, highly-valued Silicon Valley firms.

The elevator pitch tells you all you need to know: It wants to make employee training fun.

But 1Huddle, creator of a mobile platform that turns dull training materials into trivia games, is based in Newark. It’s a different place than somewhere like Silicon Valley, and the company’s leaders don’t pretend it’s not.

1Huddle CEO Sam Caucci said that’s why, upon setting up headquarters in Newark about two years ago, the company wanted to aid the city’s ongoing revitalization.

“As soon as we planted our feet here, we wanted to get engaged with what’s happening here,” he said. “It’s exciting to be here, and it’s not just because of the way the city has an energy and is fighting back, but also the way businesses are making proactive decisions to grow here, such as Audible. But there are challenges faced by local residents, and we wanted to help tackle them.”

In an example of how local nonprofits and municipalities can engage with tech startups that have sprouted in the Garden State, 1Huddle was offered a chance to use the platform it developed to help locals advance their job skills. For the company’s leaders, donating the platform for the city’s use was seen as a unique way of going beyond the typical corporate philanthropic activities.

And everyone has gotten what they hoped for out of this local experiment, according to Caucci.

“We felt we had a product that could help reduce unemployment and get people back to work,” he said. “And what we saw was residents using it had a higher rate of passing the test.”

According to the city, those who use the platform are 50% more likely to pass state-mandated workforce skills tests than those who don’t.

The test this platform is intended to help Newark residents prepare for is the Test of Adult Basic Education, otherwise known as the TABE test. It’s a prerequisite at many technical and trade schools and some colleges, as it’s used to assess a student’s academic readiness.

Over recent years, U.S. Bureau of Labor Statistics figures have pointed to Newark’s unemployment rate improving over other struggling cities in the state, and coming near to the state’s recent-low 3.1% unemployment rate. But the city’s poverty rate remains higher than most Garden State cities.

Caucci said community groups and city leaders both felt as though more residents could be working — if not for the singular hurdle of the TABE test, which many had either not taken or failed in the past.

Since introducing residents to the platform in partnership with the city and the Newark Works training organization, more than 1,000 residents of the changing city of Newark have used the firm’s donated mobile game technology to prepare for the test.

“There’s a lot of talk today about how businesses take from communities and don’t give back,” Caucci said. “But I think we have a story of what can happen when a city’s businesses are proactively looking for ways to contribute to the community.”