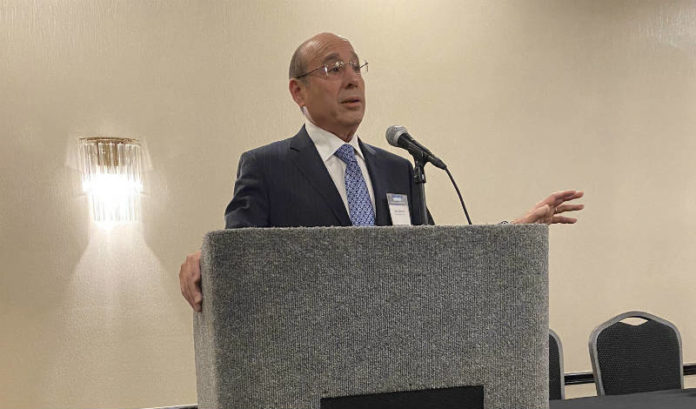 “The people of New Jersey, we think, have benefited from the fact that we have continued to make investments in our clinical programs and facilities,” he said. “But, if the mission is simply to enhance the bottom line for, frankly, the cash reserves of our respective organizations, or if it is simply to ensure that there is continued growth in counter activity, I can tell you that mission ultimately will fail — not because we won’t be good at it, but because other powers and policymakers are going to finally say to us, ‘Your day is over.’”

Research suggests, Ostrowsky continued, that 10% of one’s health is determined by genetics; nearly 30% is impacted by health care; and the remaining 60% or so relies on social determinants of health, such as living conditions, access to food, stress and employment.

“So, we decided to come up with a whole series of social impact and community investment opportunities and strategies, which we think are designed to supplement that 30% of what we do,” he said.

By partnering with small, not-for-profit, mission-driven organizations in the state already dealing with social determinants, Ostrowsky said RWJBarnabas plans to move toward and test pilot a capitated model in January that integrates both clinical and multigenerational, transformative social programs for more than 60,000 New Jersey residents.

“It takes resources that don’t get replenished — you cannot possibly earn back the investment you make in these social programs,” he said. “But that is the mission and the goal.”

Lori Herndon, CEO and president of AtlantiCare health system, said she, too, felt very personally committed to this goal.

“If not us, who? Who else is going to step up?” she said. “There are great opportunities to partner, but many of these agencies are living grant-to-grant. So, it’s about how we can get behind and beside some of these organizations.

“In fact, as an executive, I’m spending a whole lot more of my time in the community speaking with the leaders at these organizations and it has been very helpful.”

Kevin Lenahan, chief financial officer and chief administrative officer for Atlantic Health System, said that, even when making capital investments, every affiliation and partnership must now be tied to the four pillars of its strategic plan: population health, innovation, research and performance, and growth.

“We need to spread out the capital and spend it wisely to be in different areas,” he said. “We don’t have the expertise in everything — others can do it better — but we need to make sure we work with them.”

The shift cannot come soon enough, with nearly one-third of deaths in the U.S. being attributed to poor social determinants of health, Cathleen Bennett, CEO and president of the New Jersey Hospital Association, said.

“Some social needs are a whole lot greater in certain areas,” she said. “It certainly ties to education, income, food security, racial integration, implicit biases and structural racism, social supports and interactions, housing, violence — all of these different factors impact how healthy you are. From wealth comes health, but also from health comes wealth, because if you’re not healthy, you’re not a contributing member to the economy. And if you don’t have money, the mountain that you have to climb is so much greater than anyone else experiences.

“That’s one of the reasons why our anchor institutions have been stepping up in this area.”

Michellene Davis, executive vice president and chief corporate affairs officer at RWJBarnabas Health, said her organization’s approach has been echoed around equity due to the historical disinvestment that has contributed significantly to health care inequities.

“This is not happenstance — it’s actually been structurally created,” she said. “We say that our social impact and community investment practice is led by a policy arm through an equity lens, which means we have to look at where disenfranchisement has historically existed in order to figure out how we can utilize the economic engines of our large scale organizations in order to shift that somewhat.”

And one of the first steps is to have decision-makers at the table who actually have lived or can accurately understand the experience of those in need to help frame the work.

“Equity requires dignity,” Davis said. “It does not mean that we can sit high and look low and believe that we already know what they need.”

Sounding the alarm: The story that helped change the perception of...