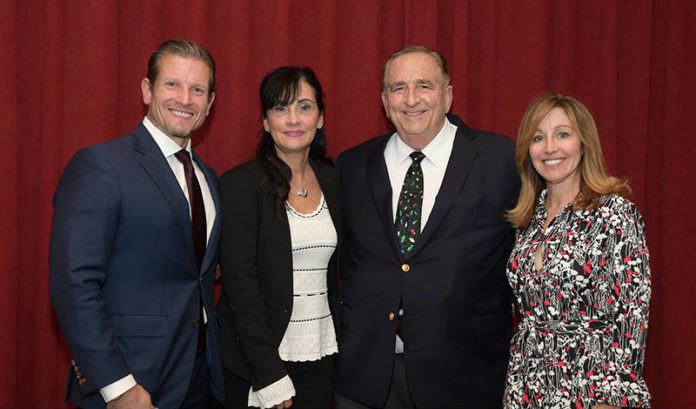 A banner year for Rider University’s business school has gotten even better, as the college announced a $1 million gift that will create two endowed scholarships for undergraduate business students.

The scholarships were created by Rob and Janet Schimek, and named for professors Barry Ashmen and Dennis F. Wasniewski. Rob Schimek, a 1987 graduate of the university, is chair of the board of trustees.

The Professor Barry Ashmen Endowed Scholarship will be open to eligible students studying any major within Rider’s Norm Brodsky College of Business — which was renamed this year after a record $10 million gift from Brodsky and his wife and business partner, Elaine Brodsky. The Professor Dennis F. Wasniewski Endowed Scholarship will support eligible accounting majors. Both scholarships are intended for students with financial need.

“I am at a point in my life where I am able to reflect on what led to my good fortune, and that was my education at Rider,” Rob Schimek, managing director and group chief operating officer of FWD Group, an Asia-based insurance company, said in a prepared statement. “It is my hope that these scholarships help provide that same opportunity for others.”

Schimek credits the two professors with connecting him to Rider and helping build his career. Ashmen, an assistant professor, encouraged him to apply to Rider, and Wasniewski — who died in 2001 — was a mentor to him as well as an adjunct professor.

The naming of the scholarships was a surprise to Ashmen and the Wasniewski family, Rider said, and was announced at an event Dec. 4.

“I believe that, had I missed out on attending Rider, everything could have played out very differently in my life,” Schimek said. “I feel blessed that I had the opportunity to get an education, and I would like to make sure that same opportunity is given to others.”