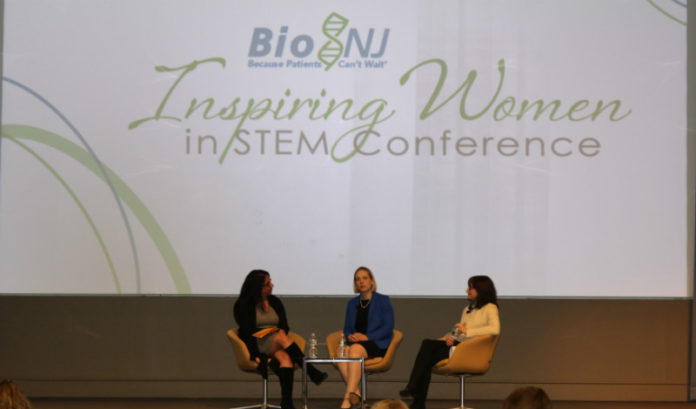 For Debbie Hart, CEO and president of BioNJ, the issues around including more women in STEM can be simplified.

“If one subscribes to the ‘We can’t be what we can’t see’ theory, then the opposite is true when BioNJ can help show women at all points in their professional development the pathways and people who can help them discover their potential,” she said.

Hart was speaking at BioNJ’s fifth annual Inspiring Women in STEM Conference, held last week at Sanofi U.S. headquarters in Bridgewater. More than 100 women with careers in all aspects of science, technology, engineering and mathematics attended.

Karen Chandross, senior director of research and development strategic initiatives and academic relations at Sanofi, noted that women make up more than half the workforce in the health care sector, but that they still face many challenges.

“Gender balance should be about what it takes to be successful in a position with equal resources and compensation and not about mindsets, biases or box-checking,” she said. “Organizations must continue to understand and address these challenges to change their culture, and I am proud to say that Sanofi is one such company who has committed to and has already made tremendous progress toward a 50-50 gender balance among our top 2,000 senior leaders by 2025.”

The overall mission of BioNJ is to make sure that its members have what they need to help advance treatments for patients, said Michele Korfin, chief operating officer of Tyme Technologies, a New York City-based biotechnology company with an office in Bedminster, and BioNJ board secretary.

“But a key component of that is the strong, successful women who are playing integral roles within our industry who are dispersed throughout our companies and critical to everyone’s success,” she said.

This particular conference is what makes her proud to be a longtime sponsor and supporter of BioNJ, said Lynne Anderson, partner at Drinker Biddle & Reath, a Philadelphia-based law firm with offices in Florham Park and Princeton.

“I find this conference to be extremely uplifting, rewarding, exciting and informative,” she said.

That’s because the business case for gender parity leads to better outcomes for the patients that everyone in the room serves, said Dr. Helen Edelberg, head of medical safety assessment in immune-oncology and global pharmacovigilance and epidemiology scientific capabilities at Bristol-Myers Squibb, a New York City-based global biopharmaceutical company with offices in Lawrenceville, Hopewell, New Brunswick and West Windsor.

“Firms with executive-level female gender diversity worldwide have a 21% likelihood of outperforming their industry competitors,” she said. “Because companies with the greatest gender diverse leadership see higher returns on sales and investments.”

Kate Chavez, associate partner at McKinsey & Co., a New York City-based management consulting firm with offices in Summit and Jersey City, presented more data — both good and bad — from its Women in the Workplace report, conducted in partnership with LeanIn.org, using insights from more than 325 companies.

“Within health care specifically, we included 45 companies, 21 being in pharma, and nearly 8,000 employees,” Chavez said. “And health care consistently appears to be one of the best industries for women in the workforce, with women in health care having better representation than the norm at all levels and women having greater career satisfaction than men in this field.”

Entry-level careers in healthcare are currently held by 65% women; however, Chavez said there is a significant 55% drop-off between entry-level and the C-suite, which is concurrent with a troubling pattern across industries.

That means for every 100 men promoted and hired to manager, only 72 women are; for Latina women, this number decreases to 68; and for black women, 58.

“For years we talked about a ‘glass ceiling,’ but the data shows that it is now an issue of a ‘broken rung,’” Chavez said. “Across the full data set of industries, the first couple of steps to manager and senior manager show the biggest drop-offs, with more women getting stuck at the entry level, and fewer women becoming managers.

“Still, fewer than half of health care companies are doing any of the practices that we have found lead to better outcomes when hiring, such as mandating a diverse slate, having diversity targets in place, establishing clear and consistent evaluation criteria prior to, having a third-party sit in on hiring and performance discussions, and requiring unconscious bias training for those involved in hiring and performance evaluations.”

As the daughter of immigrant parents from the Dominican Republic and a first-generation college student, Cabrera-Urena said she knew what position she wanted to go for and was willing to do whatever it took to get there.

“So, I asked, what are the traits and experiences I need?” she said.

A year later, when Cabrera-Urena said she felt like she had achieved all that she had been advised to do, she was still passed up for the job when the position opened.

“Why not? Typically, when you feel like you’re not getting a transparent, clear answer, you need to begin looking for other options elsewhere,” she said. “But, if I was being honest with myself, I wanted this job for the influence, not necessarily the title or the money, so I stuck around. It took me two or three years longer, but I then reached a point where my career accelerated tenfold.

“So, make sure you understand the ‘why not’ and your own ‘why’ before you jump.”

The same strategy can be applied to networking, said Peggy Hazard, senior client partner at Korn Ferry, a Los Angeles-based management consulting firm with an office in Princeton.

“Prior to networking, ask yourself: What outcome do I want? What impact am I trying to have? Is there a specific part of the business in which I am interested? Is there a skill I am trying to develop? And who are the people above, besides, and below, both inside and outside of the organization, who can enable me to expand my impact?” she said. “That will narrow down who you will choose to network with.”

The data shows, Hazard added, that men often are more strategic in how they show up and navigate their careers.

So, Korn Ferry, in partnership with the Rockefeller Foundation’s 100×25 campaign, recently published the Women CEOs Speak report as part of its CEO Pipeline Project, studying 57 women who are or who have been CEO at Fortune 1000 companies and others of similar size.

“Why not find out from the women who became CEOs how they were successful?” Hazard said. “We looked at their attributes and pivotal career experiences and asked what we could then learn from them in terms of recommendations not just for women but also for managers, mentors and organizations.”

While the full report is available online, Hazard said what she found most interesting was the moment when these women realized they could be CEO.

Seven percent said they never actually wanted to be CEO; 12% said they had indeed wanted and worked toward the position for a long time; 16% said their path became clear to them when they had reached a higher role; but the majority, 65%, said they thought about it only after someone told them they could.

“That is an interesting implication for organizational leaders, that if you see potential, you must speak up,” Hazard said.

Also of note was that, although more than 40% of the CEOs started out with college degrees in science, engineering, or math (nearly twice as many as those with backgrounds in the arts and humanities, business, economics and finance), in the health and life science sector, the report identified just one female CEO compared with seven male CEOs.

“My vision for this program is that it one day becomes obsolete, as more women choose STEM careers ranging from the lab bench to the boardroom,” she said. “Until that time, we are honored to provide this much needed program in our community.”