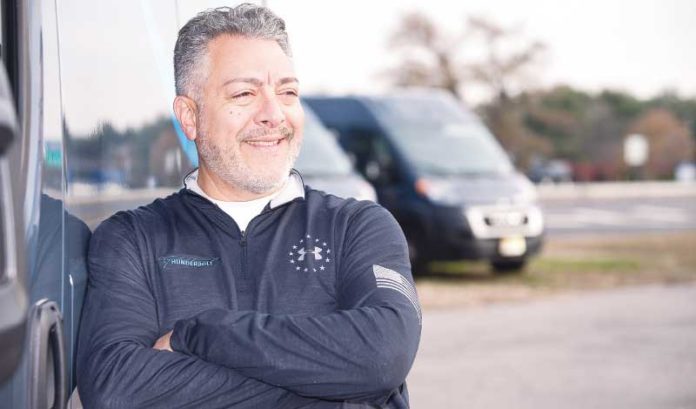 Jose Mercado Jr. served his country for nearly a decade.

Now, as a business owner, he is excited about giving back to his community.

Mercado is president of Thunderbolt Logistics in Tuckerton, a high-performing logistics company primarily focused on last-mile delivery in partnership with and support from Amazon’s Delivery Service Partner program.

And, in less than a year, the U.S. veteran has grown his company from 10 employees and five delivery vans in December 2018 to more than 80 employees and 40 vans today by regularly recruiting with organizations such as the Hispanic Family Center of Southern New Jersey, Fort Dix and local veterans’ groups.

“I won’t do anything that I don’t love doing, so it makes it very easy for me to reach out to organizations looking to provide work,” Mercado said. “One plus one can equal 11 as opposed to two, in this way.”

Mercado grew up in Lakewood and studied at Ocean County College before attending the U.S. Naval Academy to become a logistics officer in the Marine Corps.

“I was an Eagle Scout, I joined the Young Marines, the Sea Cadets — any reason I could find to put on a uniform, I did it,” he said.

However, a knee injury forced Mercado to return to civilian life in 2002, where he found work as a freight forwarder with Schenker Inc., a logistics company, handling air freight for a Fortune 100 company.

“But I missed the defense industry,” he said.

Mercado therefore took a job at Lockheed Martin as an associate program and logistics manager, where he met his current business partner, Andrew Winkler.

However, his wife’s uncle, a commercial developer, would purchase 650,000 hectares of land in Colombia just a short time later.

“Here I was thinking I had the white picket fence with Lockheed Martin when he called me up and asked if I knew anybody who understood logistics and security and spoke Spanish,” Mercado said.

Next thing he knew, the married father of four said he was in the jungles of Colombia managing a mining operation.

“It was a fantastic experience, setting up base operations for alluvial mining and dredging, but I never moved my family out there,” Mercado said. “So, after two years working to get that operation off the ground, it was time to get back home.”

Lockheed Martin, unfortunately, was under a hiring freeze at the time, so Mercado said he became a contractor by working with ASRC Federal as a senior account development manager.

“I spent nearly seven years in various capacities with that company, ultimately leaving as the director of operations and infrastructure for the engineering company in Moorestown,” he said. “I really enjoyed the work, but, again, I’m an entrepreneur. I like having my own thing.

“The Marine Corps gave me tremendous leadership experience and I didn’t want to miss my opportunity to own a business.”

It was Winkler, Mercado said, who alerted him to the opportunity with Amazon.

“Amazon is very good at providing its delivery service partner owners with the tools that we need to get our business off the ground, develop and maintain it,” Mercado said. “I put my name in the hat, a couple of months went by, tens of thousands of people applied — and suddenly I got the phone call to interview, one after the next, until I was made an offer.”

Mercado’s service to his country was honored, too.

“A month after starting, Amazon sent me another check for $10,000 and said, ‘Keep going,’” he said. “I never had to worry about not being able to pay my drivers.”

For nearly a year, Thunderbolt Logistics — part of Thunderbolt Enterprises, including Winkler’s software development business, Thunderbolt Software — has partnered with the Amazon facility in Bellmawr to grow its business.

“The program allowed me to apply a set of skills that I hadn’t had the opportunity to use as a manager,” Mercado said. “I felt more like a leader in this capacity, like I was back in the Marine Corps, with the Marines now being my drivers.

“That’s the culture that has been developed that took me from five vehicles to now 40 vehicles.”

Over 10% of Thunderbolt Logistics’ employees are prior military, Mercado said.

“As a boy from South Jersey, I knew of a couple different places in which there was opportunity, so, I thought, let me put my flag over there because I know there are people looking for work,” Mercado said. “You speak with a small group and that groups speaks to another and word gets out, so that, when I put a job advertisement out, I’ve got applicants I can then process.”

Mercado added that the 10 employees he started with helped to grow the company, too.

“I said to them that if ours was a culture they liked and wanted to be a part of, to tell their friends and family,” he said. “Now, we’ve got brothers, husbands and wives, fathers and sons — it really started to germinate from within.”

Mercado said he is grateful to all those who opened doors and gave him opportunities that others may not have had.

“Every time that happened, I grew,” he said. “I knew one day I would like to give back — and that day finally has arrived.”

“What I call success five years from now is continued growth in both businesses,” he said.

Andrew Winkler, Mercado’s business partner, heads up Thunderbolt Software, which has software development contracts with the U.S. Department of Defense, the Federal Aviation Administration and other agencies.

“Together, we want to make sure that Thunderbolt represents a good workforce in South Jersey,” Mercado said.

“I think Amazon does a really great job at finding entrepreneurial people like me who are hungry and who are leaders,” he said. “The success of the entire program is based on the fact that you will find a similar story to mine with any other delivery service partner you meet.”

Mercado said he often speaks with potential delivery service partners and Amazon employees who demonstrate the same level of hunger as he does.

“Being a delivery associate is not an easy job, but Amazon has allowed me to offer folks structured opportunities with benefits and a schedule they can live by, whether they are 21 years old or 72 years old,” Mercado said. “But I tell them that Amazon is not looking for a cookie cutter employee; they are not looking for an entrepreneur who has the ability to throw a hefty bag of capital at issues that arise; they are looking for hands-on problem solvers.

“That culture in and of itself is very unique and one that I am proud to be a part of.”

Amazon’s own Ring doorbell camera security system has caused some recent stir regarding how people’s packages are delivered.

Mercado said it would be extremely rare for his business to experience those same issues.

“Amazon provides performance metrics and safety standards and, as long as we embrace those and ensure that our drivers do, too, we won’t have a problem,” he said. “There are a set of rules that need to be followed and we pay close attention to holding everyone accountable.”

Mercado said as his business continues to grow, he wants to be able to maintain the current standards.

“I am happily growing with Amazon’s support, but sometimes, if you grow too fast, you can compromise safety and performance,” he said. “Suddenly, your business will falter and that is an experience I don’t want to have.”