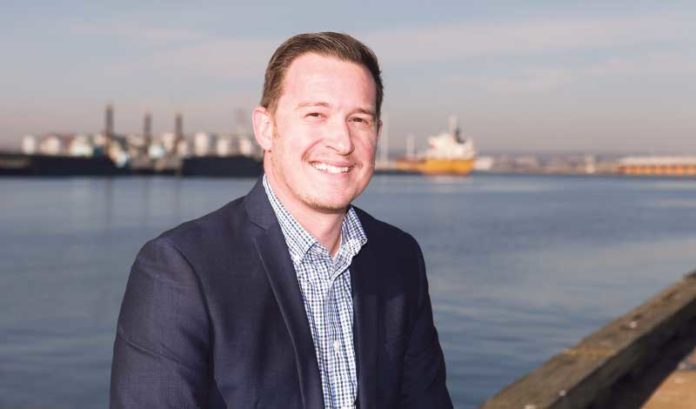 It’s that time of year again when everyone begins shopping online and in stores for holiday gifts.

But Jean-Paul “J.P.” Richer said the Port Authority of New York and New Jersey is ready for it.

“A large percentage of everything, from electronics to clothing, is coming in first through our port,” Richer, senior marine terminals operations representative at Port Newark-Elizabeth Marine Terminal, said.

Richer said most people don’t think about that while they’re shopping for holiday dinners.

“Many people don’t realize that, when you go to a grocery store, all the produce, for example, from avocados to bananas to pineapples, that stuff doesn’t just magically appear,” he said.

The fact that the Port Authority of New York and New Jersey moved over $200 billion in cargo last year — and surpassed the Port of Long Beach in California to become the No. 2 port in the nation this summer — does not make Richer’s job of overseeing the massive security operations at Port Newark-Elizabeth Marine Terminal any easier.

But with the PANYNJ supporting nearly 345,000 jobs in New Jersey alone, Richer said he is happy to rise to the challenge.

“Employees of the Port Authority help drive the economic pulse of our region, and I take great pride in that,” he said.

Richer, originally from Massachusetts, joined the U.S. Coast Guard in 2001.

“My six years of active duty tours took me all up and down the East Coast,” he said.

Richer met his wife when stationed in Staten Island, New York, and moved with her to New Jersey after she graduated law school.

“We decided to settle in, get married and have three children,” he said.

Though Richer would remain a reservist in the U.S. Coast Guard, he found work as a security supervisor at Overlook Medical Center in Summit while looking to get into law enforcement on land.

“I actually looked for a job with the Port Authority Police Department, but, at the time, they weren’t accepting any applicants,” he said. “So, I created a profile on the Port Authority’s careers webpage and uploaded my resume to check in from time to time.”

Richer said a recruiter contacted him shortly after asking if he would be interested in working as an operations services supervisor.

“I did that job for a little over a year before I was asked to join the management team in the role that I have now,” he said. “It was a very fortunate circumstance that I am grateful for.”

Richer, having been in his current role now for nearly three years, works with a lean operations management team of nearly a dozen.

“But a lot goes on, on a day-to-day basis,” he said. “It’s often an eye-opening experience for visitors to actually see the trucks and the trains and the vessels at the facility, because this is where it all comes to.”

That is why Richer’s job responsibilities often are three-fold.

As the facility security officer, Richer said he often coordinates with the U.S. Coast Guard and other local and federal law enforcement agencies to review and update security plans and emergency procedures according to trends and growing threats.

“As a maritime transportation receiving facility, there are certain protocols set in place for us to effectively and safely conduct cargo operations at the port,” he said. “But cybersecurity is a major issue — there are now a lot of guidelines when it comes to maritime cybersecurity, and, while we may be a bit behind on the times, the U.S. Coast Guard and our partner agencies have recognized it as a serious issue and have taken it on in full force.”

But Richer said the threats are always changing.

“Whenever we figure out how to combat one thing, there is always something new,” he said. “We just have to be very flexible and able to keep up.”

Richer said that is easier said than done, especially when he also is responsible for monitoring vessel operations at various Port Authority-operated public berths.

“We bring in automobiles, Belgium block, rock salt, orange juice — there are so many different commodities that we bring into our facilities,” he said.

Then there is vessel billing.

“When a vessel comes into the port, they make a request to our operations staff, whom I also somewhat supervise, and then, once the vessel leaves the port, they must submit a billing invoice, which I then reconcile and review to make sure that arrival and departure times, as well as cargo numbers, are correct,” he said.

Lastly, Richer acts as a liaison between port tenants and the Port Authority.

“Because of the numerous tenants we have through the port, those tenants are assigned to different operations representatives,” he said. “We all have our respective tenants that we deal with on a daily basis.”

Richer said that, despite his fast-growing list of duties at Port Newark–Elizabeth Marine Terminal, it is a very exciting and rewarding place to work.

“We are reaching more of a market now that we ever have before, reaching further and further into the Midwest and increasing our supply chain,” he said. “We also recognize that, as the ships get bigger, the port continues to need to grow — the more that comes in, the more people we need to keep everything secure.”

Richer said he didn’t think at first how his experience in the U.S. Coast Guard could lead to this type of work — but he’s hoping the PANYNJ’s Council on Port Performance will change that for others.

“One of the challenges we and all other ports around the country face is a lack of qualified and diverse candidates for the growing number of jobs we have,” Richer said. “This council raises awareness of port-related jobs in the community, and we’ve certainly noticed a growth in our workforce with their outreach and recruiting efforts.”

Richer said that, while Port Newark-Elizabeth Marine Terminal may be “small” in comparison, providing critical transportation and infrastructure needs — as well as access to the rest of the world — furthers the region’s economic development.

“And that is something I am proud to be a part of every day,” he said.

Terminal A at Newark airport to offer world-class roster of regional,...