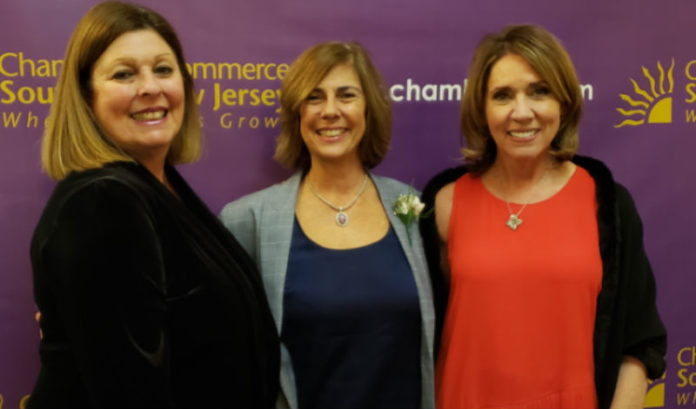 The Chamber of Commerce Southern New Jersey has been headquartered in Camden County for the past 146 years. Even though it has been around since 1873, this focus is on the past 25 years.

That’s the time spent at the helm by soon-to-retire CEO and President Debra DiLorenzo and Executive Vice President and Chief Operating Officer Kathleen Davis. Known affectionally by many as the “Dynamic Duo,” these two accomplished women have made their mark not just in Camden County, but throughout the state.

Thanks to DiLorenzo and Davis, the chamber is universally regarded as the voice of South Jersey business in Trenton. With their hallmark professionalism, DiLorenzo and Davis are known for their thoughtful testimony at Legislative Committee hearings on issues impacting chamber members. And they have earned incredible access. DiLorenzo and Davis routinely hold one-on-one meetings with key legislators and members of the governor’s cabinet and staff.

Both born and raised in South Jersey and graduates of Rowan University (then Glassboro State College), these women aren’t just revered by their chamber members, who are a who’s who of South Jersey business leaders from seven counties. DiLorenzo and Davis also are widely respected on both sides of the political aisle.

Ever humble and never seeking the limelight, as they count the final days to their retirement at the end of this year, it’s proper to highlight some of DiLorenzo and Davis’ many outstanding professional achievements.

At the top of the list is the chamber’s leadership in 2016 of an effort to reinstate New Jersey’s reciprocal income tax agreement with Pennsylvania, which has been in place for more than four decades. Doing away with the agreement would have negatively impacted tens of thousands of residents who live in New Jersey and work in Pennsylvania, while greatly impeding the ability of businesses in New Jersey to attract and retain talent from Philadelphia and its Pennsylvania suburbs.

It was also in 2016 that the chamber fought the expansion of gaming outside of Atlantic City by forming and leading the grassroots coalition to oppose the 2016 ballot question. The “No North Jersey Casinos” Coalition is credited with playing a major role in the defeat by voters of the proposed constitutional amendment.

Back in 2005, DiLorenzo and Davis formed the chamber’s Board Council on Responsible Government Spending and then proceeded to research, write and release, over a four-year period, three reports containing more than 100 recommendations, which, if implemented, represented $1 billion in taxpayer savings. Their well-researched ideas gained the chamber incredible accolades and the positive attention of state political and business leaders alike.

Nearly 10 years earlier, in 1996, DiLorenzo and Davis strengthened the chamber’s commitment to the state’s future workforce by adopting and expanding the South Jersey Summer Institute for Educators. The award-winning program in its 28th year provides teachers with a better understanding of the regional economy and insight into business operations and the skills and characteristics needed to be successful.

There is so much to applaud DiLorenzo and Davis for, including their successful five-year chamber leadership succession plan to put homegrown future leaders in place.

As this chapter of their careers ends and a new one begins, on behalf of the chamber’s board of directors, I want to thank DiLorenzo and Davis for everything they’ve done to advance business in South Jersey. And, on a personal note, I’ll cherish their friendship and support of my business for a very long time.

Lisa Simon is the CEO of SPRYTE Communications, a health care public relations firm. A resident of Cherry Hill, she is ending her six-year term on the Chamber of Commerce Southern New Jersey board of directors.

What does office reentry mean?