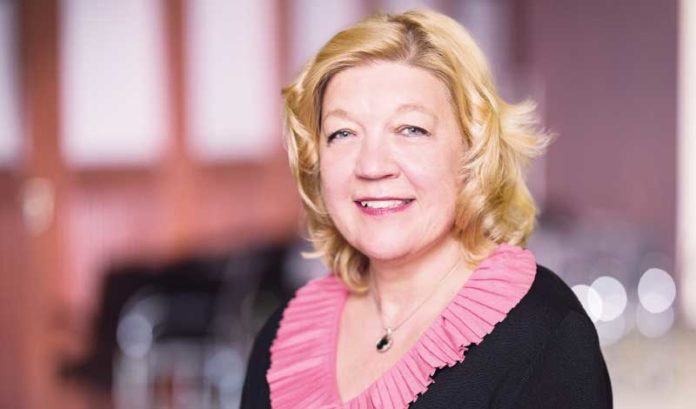 What’s the best way to describe the part women have played in the behind-the-scenes machinations of Trenton lobbying?

Lynn Nowak, executive vice president of Porzio Governmental Affairs, can only think of an old quote:

Ginger Rogers did everything Fred Astaire did, but backwards and in high heels.

“Especially in the past, women in lobbying learned that you just have to be better,” she said. “Better prepared, more knowledgeable about your stuff, asking every question and making sure predominantly male legislators trusted you and knew you’d have the right information.”

Nowak — who does work in high heels, she said, as a 5’2” woman who has to be visible in a room of still mostly male lawmakers — is one of a number of trailblazers for women in the lobbying profession in New Jersey.

Like those she works alongside, and those that preceded her, she’s hoping the industry’s unquestionable “male-dominated” label becomes a thing of the past. … Even if she knows Ginger Rogers isn’t a cultural touchstone for the millennial women who could make that possible.

The assessment she and others make is that there’s a lot to celebrate about the amount of women taking on lobbying internships and demonstrating interest in joining the profession, regardless of the current disparity between the amount of men and women doing the work.

But there has been a downside. The industries those aspiring lobbyists want to focus on aren’t always breaking the mold, according to Barbara DeMarco, vice president of Porzio Governmental Affairs.

She’s similarly encouraged by the amount of women entering the profession, but often she sees them stick with a single, and more conventional, policy focal point. Throughout her own career, DeMarco has done quite the opposite.

“I’m still the only woman doing gambling, (sports betting) and other gaming issues,” she said. “I’ve tried to get other young women to follow my footsteps, but it’s a very difficult policy vertical to work in, mostly because of how male-dominated it is — with lots of power, lots of money.”

The dearth of women focused on these issues became clear to her recently. There were no women she encountered during any step of the push she helped make for a multimillion-dollar data center at the Atlantic City Convention Center.

DeMarco, who said she’s often among only three women for every 100 men at the national conferences she attends, has been drawn to policy verticals that have proven to be atypical for women lobbyists from the start.

“At 27 years old, I entered the world of lobbying, and one of my first clients was the Thoroughbred Horsemen’s Association … not the horsewomen’s association,” she said. “Where I made a name for myself was knowing more about it than any of the legislators. And guys don’t like it when a girl knows a sport better than them. But it was my father’s passion, so I grew up around racetracks.”

But coming from a political family, a native of New Jersey’s gambling center in Atlantic County, DeMarco realizes she had some advantages that other women entering lobbying don’t.

“I’ve had a lot of benefits given to me that most women don’t have,” she said. “Maybe that’s why I’m in these verticals, but it would be nice after I’ve done this for 25 years to see other women coming up wanting to take hold of those issues.”

Unfortunately, a lot of potential policy areas within the profession can be counted as atypical for women. Nowak, co-chair of her firm’s Cannabis Task Force, has seen how even brand new fields — cannabis businesses included — can quickly become just as male-dominated as traditional industries.

These longtime lobbyists have been working to encourage more women to not only join the profession, but to look toward developing different areas of expertise.

Both DeMarco and Nowak spoke highly of the mentoring they received from Nancy Becker, whose firm was acquired about a decade ago by Porzio Governmental Affairs, a subsidiary of the law firm Porzio, Bromberg & Newman in Morristown.

“She’s an icon in Trenton,” Nowak said. “She was one of the very first women lobbyists and one of the first women to start her own firm. Nancy’s legacy lives on in Trenton, because she was not only committed to being a successful businesswoman, but also being a leader who would mentor others to follow in her footsteps.”

DeMarco added that, besides mentorship, women in lobbying would benefit from more firms emphasizing work-life balance — something Porzio, a firm that employs more than 75% women, has embraced.

“We’re not where we should be with representation of women in the profession,” DeMarco said. “But with more flexibility in the workplace … and the right mentors, we might start to see more women in those atypical areas of lobbying.”