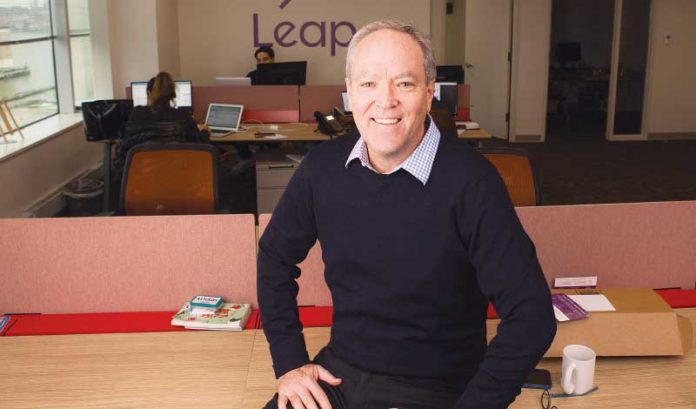 It’s not often that a baby boomer thinks to help the millennial generation.

But Richard “Rory” O’Connell said his business can — and should.

“Leap is empowering millennials to move out on their own as they begin their careers,” he said. “These are sometimes people who perhaps defaulted or were late on their student loans, or people who didn’t get the same start in life as others.”

O’Connell raised nearly $2 million last year to launch Leap Insurance Agency, a digital platform that co-signs leases for renters unable to secure them on their own and insures rent payments to landlords.

“We’re the only company in this space that is comfortably willing to underwrite FICO scores below 600 — in fact, it is a core part of our business model,” O’Connell, founder and CEO of Leap Insurance Agency, said. “We like providing this service, especially to the millennial generation, because not often in life do you find a win-win business solution.”

O’Connell said he also secured a win with the Angel Investor Tax Credit program, administered by the New Jersey Economic Development Authority, and credited the program with helping him to secure funding, establish the company’s location in Jersey City and add to its workforce.

“Thanks to a growing customer base and funding from in-state and out-of-state investors through the Angel Investor Tax Credit Program, we’ve been able to scale our model at a rapid pace,” he said.

O’Connell’s long career in finance and insurance also helped Leap start off on the right foot.

Upon earning his MBA in finance from Rutgers University, O’Connell said he found himself working in management consulting.

However, while the work was intellectually challenging and he was able to network with CEOs, it wasn’t what he was passionate about.

“I wanted the job of the guy I was consulting for,” O’Connell said. “I wanted to run something.”

“I became the treasurer within my first year and was managing all of the assets of that insurance company,” he said.

“That led to me buying lottery prizes from winners,” he said.

The company then established a subsidiary, Singer Asset Finance, in which to convert lottery winnings, structured settlements and annuities into lump sums, and O’Connell was named president.

“That gave me the entrepreneurial bug and the desire to continue working in off-beat financial assets,” O’Connell said.

When his boss left Enhance Financial Services Group a few years later to start Insurent Agency Corp. — the first apartment lease guarantor in the U.S. — O’Connell went with him as his chief operating officer.

But, in 2002, the product was simply too early to market.

“Landlords didn’t really want to change how they had done business for so long and it was difficult getting the business off the ground,” O’Connell said. “It took the New York State Insurance Department nearly 18 months to approve us because we were so new and different.”

O’Connell therefore left to work as chief financial officer at two additional startups before he decided to become his own boss.

“I always found myself keeping an eye on the space because, even though it was difficult, it had national appeal,” he said.

O’Connell raised nearly $2 million to launch Leap Insurance Agency in the summer of 2018.

“There was no incubation period, because I didn’t need anyone’s help to start and build a technology stack,” he said. “Plus, with my prior experience, I knew what I was looking for, how many people I would need to hire and where to go to find an insurance partner to underwrite this risk.

“We pulled it all together fairly quickly.”

However, O’Connell said the Angel Investor Tax Credit Program was a huge incentive.

“My investors were delighted to be able to apply to the state to prove they made a direct investment into Leap and then receive 10% back on their investment,” he said. “That was very helpful encouragement and an added benefit of investing in Leap, and, even though my investors were from multiple states, they all were still eligible.”

It also helped Leap Insurance Agency cut the ribbon on a 1,900-square-foot office in Jersey City in August 2018.

Currently, 10 of the company’s 12 employees are in New Jersey and two are located in Denver to connect with renters in West Coast markets, with Leap being licensed in 46 states.

“This is a nationwide issue,” O’Connell said.

In a little over a year, Leap has co-signed nearly 1,000 leases throughout New Jersey and in more than 24 states nationwide, with the majority of renters being between the ages of 21 and 34 with a FICO score below 620, especially students looking for off-campus housing or first-timers.

“What I have engrained in each employee and built this company around is the willingness to underwrite people with low FICO scores,” O’Connell said. “You can do a lot of business underwriting the 1% in New York City, but to be helpful and add value to landlords with a national footprint, especially landlords with tens of thousands of apartments in 20 or 30 states, you’re going to find that what they need help with is underwriting FICO scores below 620.

“That’s who they decline, and we need to be willing to take a chance on them.”

While landlords typically decline nearly 10% of applicants, O’Connell said Leap can approve nearly 60% of those applicants within 30 minutes.

“It’s quite a simple process,” he said.

What we are building will soon become mainstream in improving occupancy rates and reducing defaults. That’s how smart landlords will judge whether to take on a product like this — will it help improve their net operating income? We believe it will.”
Richard “Rory” O’Connell, founder and CEO of Leap Insurance Agency

Applying online takes less than five minutes and can be completed via mobile app.

“You’ll then hear back from Leap within 30 minutes with a yes or no decision,” O’Connell said. “We approve about 75% of all applications.”

Leap charges an average fee of about 70% of one month’s rent to guarantee the landlord the rent for the full lease term, O’Connell said.

“However, it’s much more likely that an individual will default on a credit card rather than the roof over their head,” he added.

While Leap has a few competitors in the greater New York market, O’Connell said there is little awareness of his business elsewhere.

“We have to educate and get landlords to understand how this process works, how they benefit and what our insurance policy actually covers for them,” he said. “We have to get out there and sing the praises of this new insurance to every landlord across the country that will listen.”

O’Connell said his business faces challenges at home, too, where the concentration of apartments is high and so are the rents.

“Many landlords, particularly in the greater New York City area, are third- or fourth-generation and have been doing the same thing for many years,” he said. “Plus, landlords always have had the upper hand where the demand is always exceeding the supply. Landlords don’t often care if they have to decline people, because someone else will come by a few hours later to rent the place.”

O’Connell, however, said he is not deterred.

“What we are building will soon become mainstream in improving occupancy rates and reducing defaults,” he said. “That’s how smart landlords will judge whether to take on a product like this — will it help improve their net operating income?

“We believe it will.”

Starting up in Jersey City

Born and raised in Somerset County, Richard “Rory” O’Connell said he has lived most of his life in New Jersey and chose to raise his family here.

“I had no intention of building a business anywhere else,” O’Connell, founder and CEO of Leap Insurance Agency, said.

Jersey City was a perfect place to start up in the summer of 2018, too.

“It’s got a great pool of young talent, its proximity to Newark airport and Manhattan is critical with the Newport PATH station directly across from our office, it continues to grow at an incredible pace, the rent is significantly lower than in Manhattan, and it’s a fun place to work,” O’Connell said.

But in November of that year, Jersey City approved a new law on businesses operating within the city, and since January, all Jersey City employers have had to pay a 1% payroll tax for services rendered within or supervised from Jersey City.

“This now costs us thousands of dollars per year,” O’Connell said. “I was surprised, especially given that we were a startup and we were not given a couple years of reprieve.

“I think this tax will now ultimately make entrepreneurs question whether or not they want to start their business in Jersey City, too.”