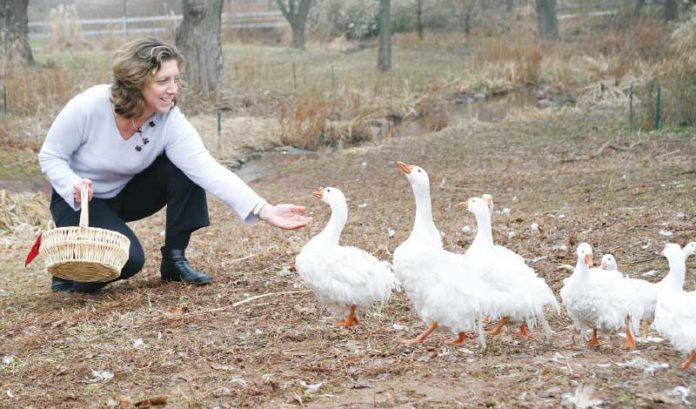 The New York City Council recently passed legislation that would ban the sale of foie gras beginning in 2022, with New York City, one of the United States’ largest markets, joining California in its prohibition of the fattened liver of a duck or goose over animal cruelty concerns.

Ariane Daguin said that, as much as this is cause for concern for her business, it also has resulted in a boom.

“We have seen a 30% growth in foie gras sales within the five boroughs of New York City since the ban was announced, including 100 new accounts, because many of the chefs and restaurateurs, I think, want to send a big message that they are with us,” said Daguin, founder and CEO of D’Artagnan, a $130 million sustainable meats company that sells products ranging from beef to lamb, chicken to quail, pork to wild boar, and rabbit to venison, as well as gourmet food products such as caviar, truffles, mushrooms — and, of course, foie gras.

Daguin, who founded the company in Jersey City nearly 35 years ago as the first and largest purveyor of foie gras in the U.S., said an additional 317 restaurants outside of New York City have newly ordered the delicacy, too.

“They have put it on their menu because they are afraid it will start with foie gras and then move on to suckling pigs or veal,” she said. “They feel their industry is threatened by this.”

Daguin said she and other industry players therefore plan to appeal based on fact, and not the widely publicized fabrications often put forth by animal activists.

Daguin would know best. Born into seven generations of cooks and restaurant owners, including her father, Andre Daguin, a chef famous in France for his Gascon specialties, Daguin began partnering with farmers to help process and commercialize whole ducks in the tri-state area in 1985.

“It was the perfect opportunity to start developing a line of high-quality meats, coming from animals raised the right way, without medication nor stress,” Daguin said.

After growing the business from a small piece of refrigeration and a secondhand orange juice truck in Jersey City, Daguin moved D’Artagnan — named for the young Gascon hero from Alexandre Dumas’ “The Three Musketeers” — to Newark in 1997 and again to its current 87,000-square-foot location in Union in 2015.

The company, which now has additional locations in Macon, Georgia; Houston; Chicago; and Denver, quadrupled its sales over the last 10 years by continuing to build cooperatives with small-scale, free-range, organic farms and ranches that do not use antibiotics or hormones — including Hudson Valley Foie Gras in Sullivan County, New York, one of three foie gras producers in the U.S.

To make foie gras, Daguin said, ducks or geese are quickly and painlessly hand-fed a corn-based mixture via flexible plastic feeding tubes up to three times a day to swell their livers up over two weeks.

“The farms feed the animals like they would naturally feed themselves in the wild prior to migration to store calories up in their liver,” she said. “But activists don’t want us to call this replication process humane because we then kill the animal, like everyone must do for meat consumption. But the actual feeding process itself is not painful nor stressful to the animal.

“In fact, the worst thing for a meat purveyor to do is cause stress for animals, because it impacts the quality of the meat.”

Foie gras, a global delicacy that has been produced for thousands of years, always has been controversial, Daguin said.

But, for example, when a councilman influenced by animal activists visited Hudson Valley Foie Gras 10 years ago, he decided not to pursue a ban based on the process he and an accompanying veterinarian witnessed then.

Daguin said she and her industry colleagues were hoping at least one of the 51 legislators in New York City would do the same this time.

“But they did not come to the farm, nor did they send anyone … a veterinarian or someone specializing in animal husbandry,” she said. “These councilmen seem to have been more heavily influenced by the activists who have been financing their political campaigns.

“So, we are going to fight it, and we’re going to do so before the ban in New York City goes into effect in 2022.”

“The producers of foie gras, including in the countries of Canada and France, then filed an appeal with the U.S. Supreme Court, which declined to hear it this past January,” Daguin said. “We have been waiting for someone in California to judge upon that injunction any time now.”

The foie gras producers and purveyors also have the support of nearly 1,000 New York City restaurants that currently list the delicacy on their menus.

“It’s easy to judge something when all we see are nightmarish pictures of horrendously treated animals, but, when you take pride in the ingredient and in the humanely raised animals that Hudson Valley Foie Gras farms has, the story changes dramatically,” said Felipe Donnelly, co-founder and chef at Colonia Verde, a Latin American restaurant in Brooklyn.

Jack Logue, executive chef at the Clocktower, an American restaurant at the Edition Hotel in New York City, said he also thinks it is a shame how decision makers have been improperly informed.

“I challenge those people to actually go up to the farms at Hudson Valley, where, through safe, sustainable and hands-on practices, they raise animals with care in order to present us with a beautiful product that has been around for more than 4,000 years,” Logue said. “Those same people should then go to one of the 25,000 vertically integrated farms that produce 95 percent of the chicken that Americans consume each day and see for themselves what true animal cruelty is.”

Furthermore, the farms that produce foie gras also often take care to sell duck products to pet food processors and to manufacturers of down bedding and coats to ensure they are utilizing the entire animal.

With this also being D’Artagnan’s philosophy, the impending ban would be very detrimental to the company, Daguin said, which sells a two-pound raw foie gras liver of a Moulard duck for $97.49 on its website.

“We also make confit, pate and more with the breasts, the legs, all of it,” Daguin said. “So, when we consider that, this ban will impact more than 10% of our business, or between $12 and $15 million in revenue.”

That news has caused some anxiety.

“We have 280 employees, 180 of whom are in New Jersey, so, if the ban were to be enacted in 2022, we would have to adjust,” Daguin said. “But we are certainly not in as precarious a position as the foie gras producers we work with, and we are nowhere near being in survival mode.

“We just simply have to start thinking ahead.”

TD Bank: Mobile tech is top of mind for restaurants