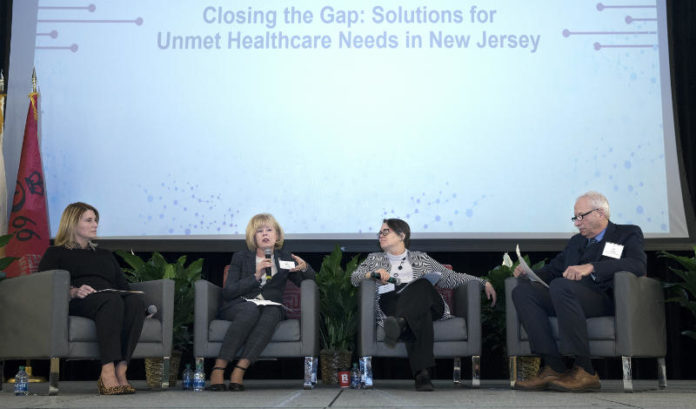 “So that the money flows in the right way and the regulations are in place to facilitate, uptick and disseminate innovation,” Cantor, professor of public policy and founding director of the Center for State Health Policy at Rutgers University, said. “So that all the work we collectively do to invent good stuff and get it into practice does not simply hit a wall.”

NJACTS will work to translate clinical research more quickly and efficiently into care and treatment for a more comprehensive group of mid-Atlantic patients, with additional funding from the member institutions growing the funding for the program to nearly $45 million.

Cathleen Bennett, CEO and president of the New Jersey Hospital Association and former commissioner of the New Jersey Department of Health, said it is an important step forward in the further integration of health and social services.

“There is an awful lot of policy that theoretically and conceptually everyone can get behind, but the devil is always in the details,” she said. “How do you operationalize it?”

“When researchers say, ‘We’ve got to do more research around what’s happening in the hospital,’ that’s actually not where it always needs to be,” Bennett said. “For example, Dr. Denise Rodgers authored a report on the black infant mortality rate in 1995. This is not a surprise to us — and we’ve got bench-to-bedside projects and innovations already taking place.

“There’s been so much focus on what’s happening between the two and three days that are actually within a hospital’s control, so, what is happening from a prenatal or even preconception perspective? How about antenatal? We have to look at the entire picture to understand. What are the genetic and social determinants? What are the adverse childhood experiences or impacts of violence on these outcomes, as well? And what is a way to look at and evaluate this data in a structured, consistent way?”

“It’s amazing to me today that we still don’t call our Social Security number what it is: our master patient index number,” she said. “We use it on our financial records, but it doesn’t flow through to our medical records, and we don’t have an easy way to track patients as they move from place to place. We need to figure that out because, once we do, we will then have a robust database to use to match with other things, too.”

Assemblywoman Nancy Pinkin (D-Edison), vice chair of the Health and Senior Services Committee, said that, just like we have the birth and death registry, we could have just one registry with all the data points people need for care throughout the course of their lives.

“But nothing is coordinated,” she said. “And while we ‘say’ we want shared data, we really don’t.”

“If we use one computer system versus another, that’s a problem, and, if we do, that’s also going to knock some people out, which is also a barrier,” Pinkin said.

Then there’s the question of ownership.

“Does the patient alone have the right to their data?” Pinkin said.

Lastly, how would New Jersey coordinate such a record with other states?

“In Pennsylvania, the insurers and the hospitals pay in to fund a very large system that patients are using,” Pinkin said. “What if those patients cross state lines into New Jersey?”

While continuing to work toward a shared health information exchange system, Pinkin said systems management can be made more effective in the meantime by helping to peel back the layers that slow us down.

“For example, when the March of Dimes, funded by Johnson & Johnson, looked at maternal child health services in Newark, they found there were so many different things happening, with plenty of funding and resources, but there were 30 different people trying to reach just one person,” she said. “It was so disjointed, there was no coordination, and it was just layer on top of layer. So, we retool that.”

Clear, evidence-based science can in fact inform policy, Heather Howard said, even if it is not always as much as we’d like.

“People who work in policy translation know that we need to act now, and we need to have ready the evidence and policy-intervention ideas,” said Howard, a lecturer in public affairs at Princeton University and former commissioner of the New Jersey Department of Health and Senior Services. “What’s incumbent upon researchers then is thinking about translating your research faster.

“I know that’s hard, but moving faster and communicating better means when you go to a meeting with a policy-maker, you don’t start with your methods. We know you have them — just translate the research in a way that is consumable, or you will lose the opportunity due to a shorter attention span in the policy world.”

“Tell them you are doing this research and let them know when it’s coming out,” she said. “Doing it in a collaborative way will also be received much more positively.”

The government’s goal, after all, is to ensure equity.

“That is not what we see happening out in the private market,” Howard said. “That is where government needs to act most — if you can see the government as your ally, partner and friend in this.”

Competition in the region

Assemblywoman Nancy Pinkin (D-Edison), vice chair of the Health and Senior Services Committee, said that, while our health care system is relatively new compared with that of New York City and Philadelphia, New Jersey’s system has gotten much better.

“We are now competing with them,” she said. “But, when you talk about clinical trials, people still think they should go elsewhere, even though our system now is much more sophisticated.”

The idea that New Jersey is not where one goes for top care is a myth, Pinkin added.

“We need to advertise to the general public that this is where you go for clinical research and trials, that we have a lot of biotech and universities here, and that we’re working hard at the state level to leverage that and engage with as many communities as possible.”

Want to learn about next generation? Talk to them

Montclair names Hollister dean of the Feliciano School of Business