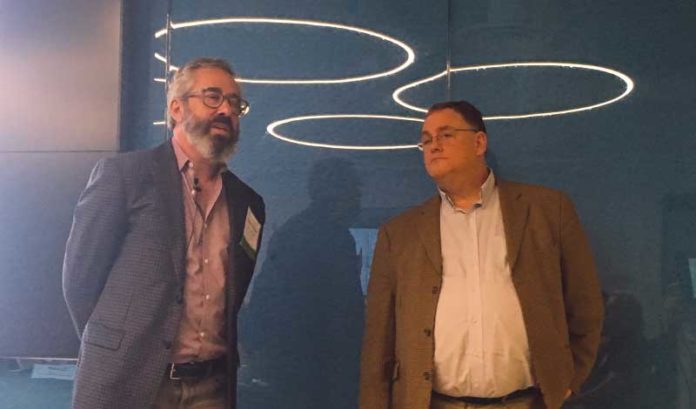 At the TechLaunch BullPen pitch event held in September at the Princeton Innovation Center BioLabs, Inkbench, a Fairfield startup founded by Steve Goodman and headed by George Abraham, won the investor panel’s vote.

Inkbench offers an enterprise-class Software-as-a-Service platform that enables creative workers to collaborate with each other on visuals that are brand compliant. The Investor Award brings the startup $15,000 in professional services donated by TechLaunch sponsors.

The audience choice award was given to Share911, an app created by OnScene Technologies, from Ramsey, that empowers individuals to alert members of the community when violent incidents occur. The impressive presentation of Share911 by Erik Endress, co-founder and CEO of OnScene, brought thank-yous and accolades from the audience during the Q&A session.

The investor panel that evening included Anne-Marie Maman, entrepreneur and executive director of the Princeton Entrepreneurship Council; Ed Berde, entrepreneur and chief technical adviser of RX.Health of New York and CEO of Bright Cloud International of North Brunswick; Jay Bhatti, co-founder of BrandProject of New York; and Rudy Valli, an angel investor and founder of Valmar & Associates in Mendham.

Inkbench brings together in one platform a visual digital asset-management system, brand-protection tools and an advanced design canvas, Abraham said during his pitch. It allows companies to be brand consistent over a variety of outlets, including social media, websites, advertising and intranets, to name a few, and over the many departments involved in creating content.

The product solves a problem for companies with many hands in the digital creative pie, as they sometimes lose control over their branding, he noted. Inkbench ensures that there is total control over assets, and over the modifications made in the assets, so that the brands send a consistent visual message both inside and outside the company. It even solves problems, for instance, preventing the accidental use of unlicensed photos. Inkbench already has customers in large enterprises like the pharmaceutical company Merck.

Users save money, Abraham said, because agency costs go down and stock house costs go down. Also, “This gives organizations something they really desire: brand control.”

Discussing Inkbench’s revenue model, Abraham said, “We sell by workspace, and you can have as many people in the organization as you want using the workspace for a flat fee.”

In response to a question from the audience, Abraham said clients find that, if they use Inkbench for three projects a month, they start saving money. A judge asked Abraham how the product was developed, and Abraham answered that Ed Maybert, the company’s lead developer, spearheaded the effort and, “We have an offshore development team as well.”

Endress of Share911 talked about his entrepreneurial journey, including how he got involved in tragedy prevention when incidents like the shooting at Sandy Hook Elementary School took place.

“When we started the business, we would go to schools and organizations, and people would tell us that shootings would never happen there,” he said.

States with open carry laws would say that if a bad guy came to the school, they’d shoot them.

“However, now you can’t go to even a music festival and be assured of safety. Shootings are everywhere,” he said.

“I really wish we had gone out of business because there never were any more school shootings or shootings in a workplace,” Endress told the group.

He noted that the general population is trained to call 911 when they see someone with a gun, but the police can’t arrive soon enough.

“Meanwhile, the guy is still heading your way, and the rest of the people in the workplace don’t have any idea of the danger,” he said.

“The Share911 app lets the first person who sees a shooter broadcast where he or she saw them and other details to any adults who have the app, and simultaneously alerts the 911 call center for that particular location and also goes directly to first responders’ phones,” Endress said.

In response to a question from another audience member, Endress noted that the company does not allow students to have the app. If the app is used in a school district, users must have a school district email address. The judges said that they wanted to know more about the business model.

Ashish Arte, co-founder and CEO of SURGERi, based in Princeton, told the judges that his company helps surgeons provide better care for their patients through data analytics. The product is currently being used to analyze heart operation outcomes in order to create better procedures for heart surgeons. Using hundreds of variables, surgeons can predict possible complications for an individual patient. This knowledge allows a surgeon to change how he or she approaches a particular operation. The product is also being used to evaluate prostate and liver cancer patient outcomes.

“Using a combination of descriptive statistics, exploratory data analysis and predictive analytics, we are helping surgeons and researchers identify the most effective treatment available for their patients, build a risk profile of their patients before they undergo surgeries and analyze historical surgical data sets for the purpose of accumulating research findings and accelerating recovery,” Arte said.

The company started in India and has customers internationally, but it’s now “focused exclusively on the U.S. markets,” he said. “Our business model is to deliver ‘analytics as a service.’”

A premium plan offers some customization for the user, he said. The company also plans to make a white-label product available to others to integrate into their services. Arte said that he was raising a $750,000 seed round for his company.

When an audience member asked how SURGERi differed from its competition, Arte responded that the focus on surgery is different, and that no one else is evaluating these procedures in the same way. A judge noted that the $750,000 Arte wanted to raise wouldn’t get him far enough in this market, given that hiring talent is so expensive and that this specialized product will need a lot of money to get to market.

“This is such a competitive space that you’ll have to market it aggressively,” he said.

At each TechLaunch BullPen, a student company also presents. At this one, Nicholas Leiter, CEO of Uproot Homes, from Princeton University, shared the startup’s concept for helping military personnel accumulate home equity.

The audience for Uproot’s service is military members who must move every few years, and thus don’t have the time to build equity in the homes they buy. This problem prevents many American service members from achieving the American Dream.

Uproot manages the hassle and risk of homeownership for its customers by offering them a guaranteed cash payout or the opportunity to enjoy long-term ownership benefits without the responsibilities of long-distance property management after they move.

While the investor panel judges thought this was a worthy endeavor, they worried about Uproot’s business model, including the amount of risk the company would have to take on.