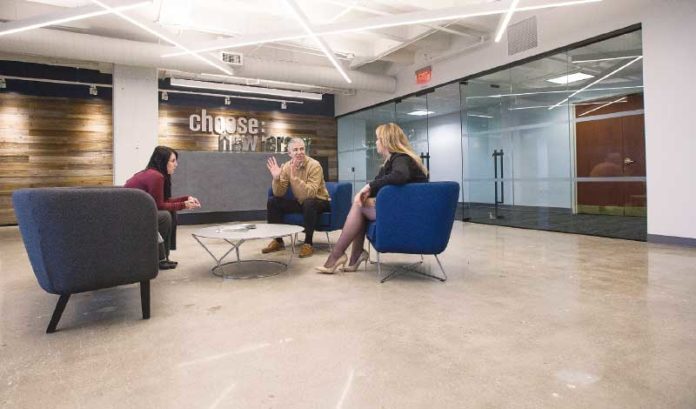 Choose New Jersey officially opened the doors at its new location at Gateway One in Newark on Jan. 6. But the truth is, the organization had been holding more and more meetings in Newark for some time.

And, if you ask CEO Jose Lozano, who started in June 2018, it’s where Choose has needed to be located all along.

“The first time I drove to the offices down in Princeton and I sat down with the team, I said, ‘We have it all wrong; we’re not living our narrative,’” he said. “Our narrative needs to be this: We need to be in an urban-centric location of the state within eyesight of the largest market in the world. We need to be here.”

“Here” is the 14th floor of Gateway One. Choose, occupying 7,900 square feet, shares the floor with satellite offices of the Governor’s Office and the New Jersey Economic Development Authority — both of which will have some staff in Newark at all times. Choose will have 14 staffers stationed in Newark.

The ability to work together is not lost on Lozano, who was pushing for the setup as a way to promote the state better.

“It just makes a lot of sense,” he said. “If a company needs a better understanding of programs that may be available from the state, having someone from EDA come across the hall is ideal. Even better, if we feel like we’ve got someone on the bubble and the governor happens to be down the hall, having him conveniently drop in and reemphasize the benefits of New Jersey is a great advantage.”

The office itself does that, too.

A look out the windows shows many of the state’s major companies, including Public Service Enterprise Group, Panasonic, Horizon Blue Cross Blue Shield of New Jersey and Mars Wrigley, as well as Rutgers University-Newark.

Then there’s the skyline. The New Jersey skyline.

“As you walk through the office, you can absolutely see how one of our largest assets is our proximity and location,” Lozano said. “You can see two arenas (Prudential Center and Red Bull Arena), two modes of transportation, people moving products at the port, New York City, Staten Island, Jersey City and even a little bit of the Meadowlands. You can see it’s the tip of the ski slope.”

Lozano designed the inside with a salute to New Jersey’s manufacturing history, with unfinished ceilings and heavy use of wood on the floors and walls. But it’s very much a modern workplace with open spaces, huddle rooms, standing desks and gathering spaces.

“And the offices are small, designed to get you out of your office and intended to kind of collaborate along with the team members,” he said.

Lozano said the office also will resonate with the international companies the state is trying to lure. There is LED lighting (which turns on and off by sensor), a water machine (no plastic bottles) and plenty of open light (coming in from the large windows). They all are features designed to make the office energy efficient.

“Americans are not as in tuned with energy consumption, but international companies almost always are,” Lozano said. “They will notice this.”

As in, both the office and the area surrounding it, Lozano said.

“All international companies are urban-centric,” he said. “This is what they’re used to. We used to take them to the suburbs.”

Now, Choose will be able to take them to a fully functioning office space in the city. One that is highlighted by a 16-seat circular table in the main conference room.

“This is very purposefully intended,” Lozano said. “It’s circular, so there is no head of the table. So, when we’re doing diplomatic meetings or international meetings, there isn’t that ceremonial issue of who sits at the head of the table.”

The conference room leads into the main lobby area, which is big enough to hold a reception or a media event. Or impromptu meetings. Lozano feels being in Newark will enable Choose to gain access to companies coming in to look at New York City.

“I can’t tell you how many times I talk to delegations that are coming in and they tell me they are flying into Newark,” he said. “The first thing I say is, ‘You know that’s in New Jersey, right?

And, while Choose will maintain a satellite office in downtown Trenton (it will share space with the Greater Trenton), Lozano said Newark is Choose New Jersey’s home.

“For Choose, this is our focus,” he said. “We are living what we preach: Access to our large talent pool in one of our largest cities. It’s our renaissance city.

“First impressions mean a lot. And this office was designed in a way for first impressions to give you a really good feel of who New Jersey is. We are one of the only states that’s technically considered 100% urban because of our dense population. You can get the feel for that. You don’t have an appreciation of how many people are much more visual learners until you do a job like this and you see that people really just don’t get it until they are able to see it and feel it.