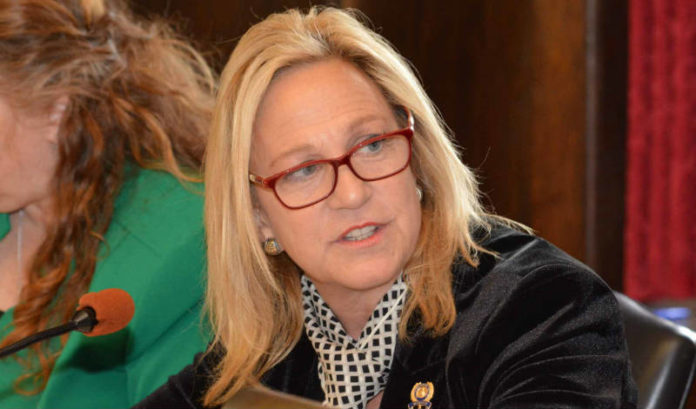 She was sorry that the ban on hard alcohol got the most attention. It makes people miss the point, she said.

“It leads some people to believe something that isn’t true,” Huttle (D-Englewood) told ROI-NJ. “Alcohol doesn’t cause sexual harassment or sexual assault, predators do. This is not just my opinion; this is based in statistics. It’s fact.

“I think we need to work to eliminate the mentality that rape is connected to alcohol. And we need to understand we’re not getting to the root of the problem by banning alcohol on the chamber trip.

“At the end of the day, people are still harassing because they want to, not because of the liquid courage. And it’s not just in politics, it’s everywhere.”

The initiatives are the result of a story on NJ.com, in which women described a history of harassing behavior at the state’s two biggest networking events of the year: The Walk to Washington train trip and the League of Municipalities convention. The next train trip will be Feb. 27-28.

Huttle agrees that these events, which are must-attends for so many in the political and business world, can foster a reckless atmosphere. But she repeats her insistence that alcohol — and the events themselves — is not the problem.

And banning hard liquor, Huttle said, is not a solution.

“It reminds me a little bit of antibullying programs in the school,” she said. “It’s great to restrict it on the grounds of the schools, but it’s only effective if you can teach kids not to bully when they go home and when they are away from school.

“(Rape culture) is not about alcohol, it’s a symptom of our society as a whole. We need to work to eliminate that rape culture. It’s a complex issue; we’ve got to look at solutions to get to the real root.”

She applauds some of the chamber’s other initiatives: more training and education, more security, a code of conduct for all riders and a phone number where incidents can be reported immediately.

Huttle also supports the ad-hoc committee that state Sen. Loretta Weinberg (D-Teaneck) is forming to discuss harassment. Her hope is that the committee includes one thing: plenty of men.

“We need to include men and have them understand that this is not a joke and this not about a train ride,” she said. “This has been around for a long time. And, if we’re going to change the culture, we need information, education, all people included, not just the women that are victims.”

Huttle knows the history. Four years ago, she worked on bills to establish “permanent consent” — often known as “Yes means yes,” as opposed to “No means no” — on college campuses.

There’s a lot that needs to be done. And Huttle said she hopes those needs are not lost in headlines about eliminating alcohol on a train ride.

“I think the state chamber’s plans, which include increasing sexual harassment training for their staff and increasing security personnel, are helpful,” she said. “I thank them for it. And I applaud them for that. They’re taking steps in the right direction. They’re not dismissing it, they’re addressing it. But this is about more than alcohol.”

Huttle feels now is a time to educate others on this fact.

“This topic is out there now,” she said. “Everyone is in on it. Let’s hope we can change the culture, because this is everywhere, not just on a train ride and not just in Jersey politics. It’s everywhere and it’s about a whole lot more than alcohol.”