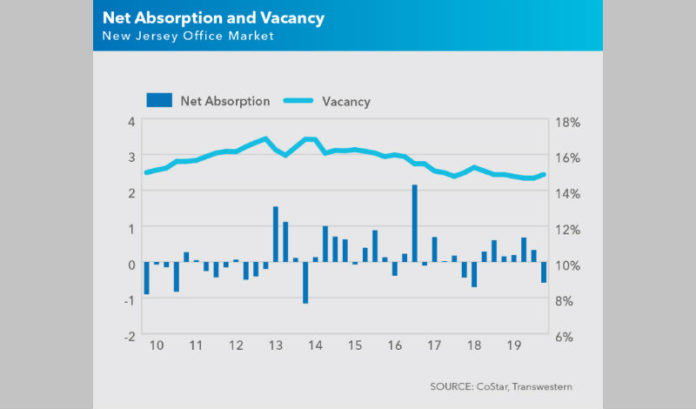 In 2019, positive net absorption was recorded even with a setback in the fourth quarter. Occupancy growth was positive as well, with increased leasing activity seen in the Bergen Central, Morristown, Newark/Essex Urban, Princeton, and Wayne/Paterson submarkets. In terms of total leases signed, Morris County led the way in North Jersey in the fourth quarter, and Middlesex County led in Central Jersey.

“While past expansions were centered around new construction, this was the decade of redevelopment, with limited new product and essentially no threat of overbuilding,” Matt McDonough, managing director, Transwestern, said. “Office investors and landlords gained tremendous success through value-add opportunities, upgrading well-located and outdated product, while adding amenities to create a more hospitable environment for today’s office tenants and their employees.”

Nearly half of all leases signed in the fourth quarter were renewals or extensions, the report said. The largest lease in the quarter was a renewal of 400,000 square feet in Jersey City by Pershing, a subsidiary of The Bank of New York Mellon. Another notable lease included Promotion in Motion, which took nearly half of the 224,000 square feet at the former global headquarters of Hertz Corp. in Park Ridge.

After hitting a historic high, the average rent fell slightly to $27.39 per-square-foot in the quarter. Of the states 21 submarkets, 16 saw higher rents when compared to last year with several experiencing double-digit year-over-year increases (Bergen East, Edison South, Short Hills/Millburn and Woodbridge/Metro Park). Office rents for Q4 2019 were up 10.2% higher than a decade earlier.

“Though many are preparing for an anticipated economic slowdown, both large and small business owners in the state remain optimistic and are expecting profitability in 2020,” Matthew Dolly, New Jersey research director, Transwestern, said. “An increasing number of suburban New Jersey townships are also entertaining redevelopment proposals, which should increase the competitiveness of the market.”