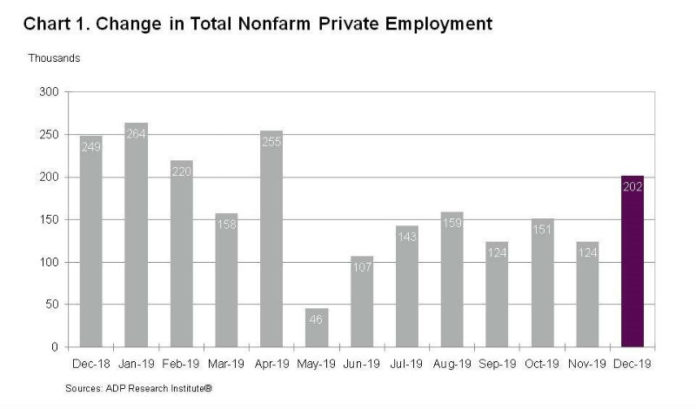 Private-sector employment was up by more than 200,000 jobs between December and January, according to the latest National Employment Report by Roseland-based ADP.

The payroll and human resources company said in a news release that the month saw a 202,000-job uptick in nonfarm private employment.

“Job creation was strong across companies of all sizes, led predominantly by mid-sized companies,” Ahu Yildirmaz, vice president and co-head of the ADP Research Institute, said.

“As 2019 came to a close, we saw expanded payrolls in December. The service providers posted the largest gain since April, driven mainly by professional and business services,” he said.

“Looking through the monthly vagaries of the data, job gains continue to moderate. Manufacturers, energy producers and small companies have been shedding jobs. Unemployment is low, but will begin to rise if job growth slows much further,” Mark Zandi, chief economist of Moody’s Analytics, said.

Survey: Struggle to find workers (despite raising wages) has 1 in 4 business owners thinking of selling their companies

Finance
ROI-NJ Staff -
November 30, 2021
Looking to help drive economic opportunity and upward mobility, Bank of America announced Tuesday that it will be making more than $4.2 million in...

Industry
Eric Strauss -
November 30, 2021
A Paterson-based distributor of paper products has been sold to a New York-based paper company, according to mergers & acquisitions specialist the DAK Group. The...

NJBankers Foundation to award $50,000 to support veterans programs at N.J....