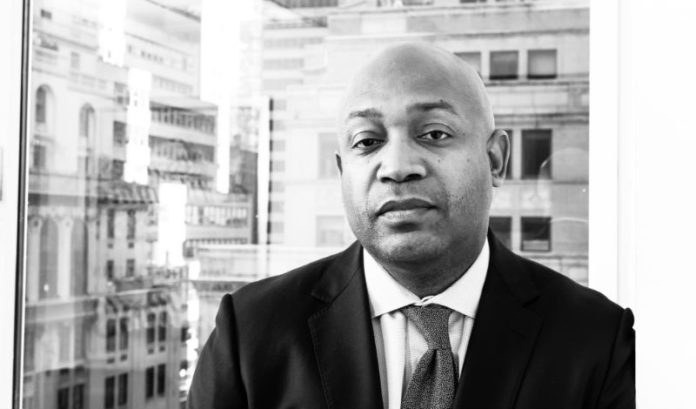 Jacob Walthour, the co-founder and CEO of Blueprint Capital Advisors and a longtime New Jersey resident, doesn’t mind rattling off the numbers. And he didn’t mind telling the state’s Joint Committee on Economic Justice and Equal Opportunity one indisputable truth of Wall Street: The numbers don’t lie.

In an impassioned opening statement before a committee that included Sens. Ronald Rice (D-Newark), Nellie Pou (D-Paterson) and Loretta Weinberg (D-Teaneck) as well as Assemblyman Benjie Wimberly (D-Paterson) in Trenton earlier this week, Walthour explained the economic disparity that members of the African American and other underserved communities in New Jersey face.

And he expressed his disappointment in how he feels so little has been done to change it.

Walthour, a resident of South Orange, said he has seen firsthand how underserved communities have been left behind.

“The sad reality is that, while we enjoy an economic boom on a national level, many of our cities and neighborhoods in New Jersey inhabited by ethnic minorities are suffering from economic depression,” he said. “The truth is that 80% of the poorest ZIP codes are inhabited by black and Hispanic residents as the majority. Young people are fleeing the state because they can’t come home and find well-paying employment. Homeownership continues to decline, and gentrification is on the rise.

This is New Jersey, Walthour stressed.

“These are the kind of numbers you see in Alabama, Mississippi, Louisiana and Kentucky,” he said. “And, I want to be clear that this is not an exaggeration. While New Jersey is No. 2 or No. 3 in terms of per capita income and wealth, that income and wealth is not evenly distributed. Income inequality in New Jersey, or the gap between the rich and poor, now ranks 12th-highest in the nation.

“Kentucky, Georgia, Alabama, Mississippi, Florida all have identical Gini index (wealth distribution) reading to that of New Jersey, which says to me that, in 2020, a black or Latino American worker is no better off in New Jersey than they are in Mississippi. As a resident of this state, I am embarrassed. As an African American, I am hurt.”

Walthour, whose firm has offices in Newark and New York City, said the solution isn’t handouts, but opportunities. And he pointed to the lack of them in New Jersey for wealth firms run by women and minorities. Especially compared to across the river. The numbers don’t lie, Walthour said.

“New Jersey’s population is 50% female, 13.5% black and 13% Latino,” he told the committee. “However, less than 5% of external assets are managed by WMBE (women- and minority-owned business enterprise) firms. Relative to other states that care about diversity in the execution of their pension, New Jersey is 25-30 years behind its peers.

“Asset management offers a stark reminder of the obstacles preventing people of color from fully participating in our capitalist democracy — even in 2019,” he told the committee. “Your committee oversees the country’s largest banks. The four largest hire hundreds of asset management firms to invest nearly $1 trillion across three pools of assets: their own corporate pension plans, their own 401(k) plans and externally managed wealth management platforms. You can essentially ‘round down to zero’ the assets managed by diverse firms across those three buckets.”

Increasing minority participation is not only good for those communities, but everyone, Rogers said.

“Baseball became a better sport when Jackie Robinson was allowed to play,” he said. “The financial services industry is well-served by dynamic leaders such as Eddie Brown, Mellody Hobson and Robert Smith, who are job creators, philanthropists and important role models in our community. Of course, we all saw Robert Smith commit to erase the student loan debt of the entire 2019 graduating class of Morehouse College.”

John Harmon, the founder and CEO of the African American Chamber of Commerce of New Jersey, helped bring Walthour and Rogers to Trenton. He said he feels the state is not doing enough to bring businesses to firms such as theirs.

“I have worked very closely with Sen. Rice and his committee members to identify competent and qualified firms who possess the capacity, experience and demonstrated track record of success and can effectively manage taxpayer dollars and deliver a respectable return,” he told ROI-NJ. “However, many of these firms have not been afforded fair and equal access to opportunities; in some instances, it’s because of lack of awareness that they exist.”

“New Jersey is one of the most diverse states in America,” he said. “However, when it comes to equitable participation in wealth creation strategies, employment and contract opportunities leveraging the talent that exists within the black and Latino sectors of New Jersey, at times it is difficult for some to give them an opportunity to compete, notwithstanding the potential for better outcomes.”

Harmon said the AACCNJ is working to change that.

“One of the roles of the African American Chamber of Commerce of New Jersey is dispelling the perception that black businesses lack the wherewithal to provide value,” he said. “The firms that gave testimony today before the committee provided substantiated evidence that they are ready, willing and able to compete effectively for opportunities within the state of New Jersey — provided a level playing field. This should serve as encouraging news for the (Gov. Phil) Murphy administration, given their efforts to support the mission of AACCNJ.”

Walthour echoed those thoughts. In fact, he called out the Murphy administration for not doing enough:

“Gov. Murphy said at his inauguration that: ‘The work of our administration will be about you, your families, and your communities. We will never lose sight that we are one state and one family, with different beliefs but common dreams, and that we do not succeed unless we all succeed.’

“To that, I say: ‘Governor, are you serious? There are two New Jerseys.’

And, once again, he went to the numbers.

“This, ladies and gentlemen, is what I call the ‘Great Myth About New Jersey.’ Contrary to popular belief about the leafy Northeast, left-leaning, ‘blue’ state, the truth and reality is that this state has not been any more supportive of its poorer residents, including African Americans, economically than the Southern ‘red’ states.”

“Now, I do agree with Gov. Murphy’s statement that, ‘A stronger and fairer New Jersey is rooted in an economy that creates better jobs and provides higher wages … that creates places where industries can grow, and communities can rise,’” he said. “I agree 100%. As a resident, as an African American and as the chief executive of a minority- and woman-owned business enterprise, that statement was music to my ears. And I danced. I danced for two years. But, sadly, the music has stopped, and the work of your committee is as important as ever.”

The numbers, after all, don’t lie.