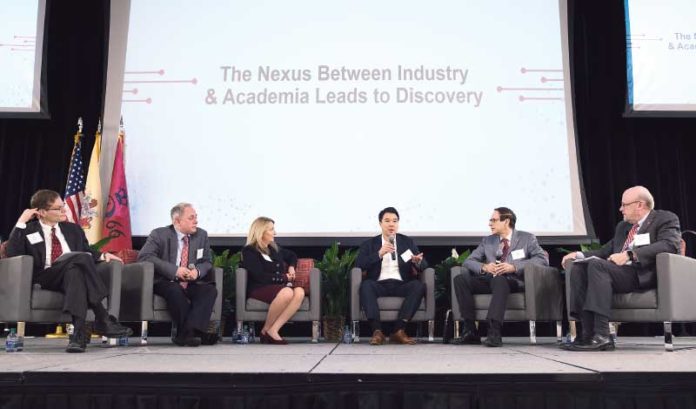 When he worked in pharma, Christopher Molloy said, trying to work with academics was very difficult.

“Even trying to accomplish pre-discovery trials with Harvard was impossible without involving five lawyers and a year’s worth of time,” Molloy said.

Today, as the chancellor of Rutgers University, Molloy credits the integration of Rutgers with the University of Medicine and Dentistry of New Jersey to create the Rutgers School of Biomedical and Health Sciences in 2013 with much-improved coordination. That has led to public-private partnerships, such as with RWJBarnabas Health, and increased funding for clinical research, such as the school’s recent $29 million Clinical and Translational Science Award from the National Institutes of Health.

The New Jersey Alliance for Clinical and Translational Science, an academic consortium between Rutgers, Princeton University and New Jersey Institute of Technology at the Rutgers Institute for Translational Medicine and Science, recently celebrated its $29 million award with a health care-oriented event at Rutgers’ campus in Piscataway.

In partnership with hospital systems, not-for-profit organizations, community health centers, outpatient practices, industry and pharmaceutical leaders, data centers, policymakers and more, NJACTS will work to translate clinical research more quickly and efficiently into care and treatment for a more comprehensive group of mid-Atlantic patients, with additional funding from the member institutions growing the funding for the program to nearly $45 million.

It is just one example of how Rutgers has rapidly advanced science, said Joachim Kohn, board of governors and professor of chemistry at Rutgers and director of New Jersey Center for Biomaterials.

“I am also an entrepreneur with 78 patents in three companies and commercial products now sold in 46 countries worldwide,” he said. “And, when I got my first patent in 1987, it was a one-man operation — I was a sole warrior without resources, an ecosystem, venture capital or support. It took months to simply begin.

Jim Gunton, managing partner and founder of Tech Council Ventures, a New Brunswick-based venture capital fund created by the New Jersey Tech Council to manage nearly $130 million in investments in early-stage technology companies throughout the mid-Atlantic region, said time is of the essence.

“It is the biggest thing we need for positive collaboration with Rutgers and other academic institutions,” he said. “Our investors are committed to us because they think we are going to make them money. We don’t have the luxury of taking a year or two while we try to get something going — so, what we’ve done to address this issue is to come in a bit further along, though still pre-clinically.

“We would love to be able to get the ball rolling earlier to capitalize on all the great innovation happening.”

“We always used to lament how decentralized and disconnected the New Jersey health care and research and development system was,” he said. “But, if NJACTS can position itself as a consortium with something unique that others don’t have, such as the ability to access and include diverse populations in clinical trials, which are often difficult to recruit, it will have a flood of pharmaceutical companies coming to work with it.”

Dawn Furey, vice president and head of portfolio delivery operations for Janssen Research and Development, the pharmaceutical arm of Johnson & Johnson in New Brunswick, said she, too, is interesting in developing a relationship with NJACTS.

“We want to have a continuous dialog around what assets they are developing and what can be brought into our organization,” she said. “I am always looking for ways to identify and partner with the best patients early enough for our clinical trials. Right now, there is a lot of fragmented data out there, and our patients often don’t understand how to access the most innovative care that could potentially alter or save their lives.”

“But, if we had access to companion diagnostics to help us identify patients before they are showing any disease progression, we can contact them to discuss what options may be available. That is a huge asset, both for patients, industry and academia.”

Increased access to and development of data is all well and good, but the question remains — who owns it?

David Lee, chief data officer of the New York City-based Medidata Solutions, the largest data and technology company in the clinical trial industry, said that challenge can slow things down.

“Having supported more than 18,000 clinical trials, we have mechanisms to analyze the performance of clinical trials and what will make the science more efficient,” Lee said. “Often times, academics will be interested in our data so they can run their analyses and publish the research, but the data is not our own – it’s our sponsors’.”

However, when an academic presents their own research, as was the case with a professor at University of Pennsylvania, Medidata can help integrate, organize and analyze it.

“In this case, we were able to find a new biomarker for Castleman disease — which led to the creation of the only on-market treatment,” Lee said. “Or, if you have new methodologies you want to try on our data sets, we have interest in that, as well.”

Dawn Furey, vice president and head of portfolio delivery operations for Janssen Research and Development, said giving others access to data at the pharmaceutical arm of Johnson & Johnson in New Brunswick is also a sensitive issue.

“We usually get lawyers involved on both sides, with each of our collaborative partnerships coming with different intellectual property,” she said. “But, if we could have master service agreements with language that doesn’t have to be revisited each time, with perhaps a revised intellectual property clause, that would make it much faster to initiative a collaborative partnership and ultimately a clinical trial.”

Rutgers School of Business–Camden dean steps down, returns to faculty