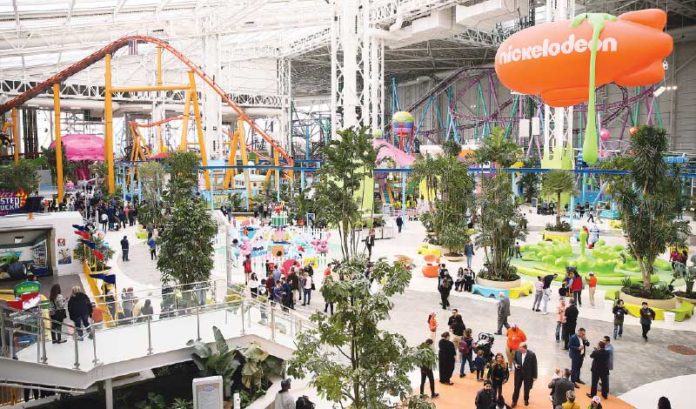 Jim Kirkos, the CEO of the Meadowlands Chamber, is confident American Dream is going to be a huge success.

“I think American Dream is going to be immensely successful,” he said.

He hopes it will lead other destinations, too.

Kirkos’ ultimate goal is for American Dream to spur a nearby convention center — and a casino.

“If they put a casino at the sports complex with the American Dream and a convention center, we’ll have it all,” he said. “We could capture every type of audience for sports and entertainment. That’s what I’m shooting for. And I’m not backing down.”

Kirkos recently sat with ROI-NJ to talk about all things Meadowlands. Here’s a look at that conversation, edited for space and clarity.

ROI-NJ: American Dream did not start with a bang, but a slow rollout. Is that concerning to you?

Jim Kirkos: I’m not worried at all about the success of American Dream. And I actually think the way that they are opening, whether designed or not, worked out perfectly. Opening up in phases gives them a chance to work out the kinks and allows them to be able to figure out all the things that they need to do.

The Ghermezians (the developers) have proven themselves. Everything that they said they were going to do, they’re doing. They changed the ski slope; it’s no longer ugly. They didn’t do that because people said it was ugly. They did it because they didn’t want something that was ugly.

When you go inside and you look at the materials they used: The tile, the railings, the ceiling, the lighting — it’s all spectacular stuff. That’s why I believe they’re going to be so immensely successful, because their dedication to quality is off the charts.

ROI: People will question if a successful American Dream is only taking away from the success of others — and leading to the downfall of other places, especially retail outlets. Give us your thoughts?

JK: That is a big concern of mine. My job is to make sure that when people come to stay for a long weekend to go to American Dream, that they find their way into downtown Rutherford, into downtown Secaucus to go to those local experiences and to other destination assets.

But the biggest thing is making sure people have the confidence that they could come here and be transported from where they are to all these assets in a quick and efficient way. That’s really the goal. We cannot lose sight of that. It’s an economic imperative.

ROI: A successful American Dream can only help you land another of your goals: bringing a state-of-the-art convention center to the Meadowlands. Where are you in that pursuit?

JK: We are halfway through a revisioning of the sports complex. Within the next couple of months, we will have an updated vision plan. We did it about five or six years ago, when we showed a convention center, casinos, hotels and a monorail system connecting all the pieces. We still think that’s the model.

When American Dream fully opens by the middle of 2020 and we see that it is not a traffic nightmare that people were worried about, then I think people will be open to this. I think public policy people, the government, the administration and local government will be open to really advancing the concept of putting in a convention center.

ROI: This would replace the arena, correct? What’s going on there?

JK: The arena is being rented by NBC Universal right now; they’re using it as a TV studio. It’s a good economic impact. It created a thousand jobs and puts people in some hotels. But a convention center will operate 365 days a year and it has an economic impact 20 times that of a TV studio. I want the best-case use out of it. So, it’s working right now, but I think you need to either replace or transform the arena into a fairly large convention center that really powers a region.

ROI: Talk about what the convention center could do that the arena cannot?

When the Izod Center operated, there would be maybe a hundred event days a year. We had a big hole when Izod Center closed. We could replace that with something that operates 250 days a year. That’s two and a half times what the old Izod Center used to do. That’s amazing.

ROI: And having a convention center could add to events already here, correct?

It doesn’t make sense not to have a convention center or a facility that can be complementary to the stadium and to American Dream.

ROI: You have mentioned the one other potential destination: a casino. Give us your thoughts on that?

JK: I hope New Jersey will we be lucky enough someday to get out of the politics of gaming and put a casino up here. If they put a casino at the sports complex with the American Dream and a convention center, we’ll have it all. We could capture every type of audience for sports and entertainment. That’s what I’m shooting for. And I’m not backing down. I don’t say that because it’s what I’m supposed to say as the chamber exec, I say it because I believe it.

ROI: How big an impact can American Dream have?

JK: If we leverage the facility for the whole region and for the state — and use it for everything that it can be — this project can do for the region what the sports complex, the track and the stadium did back in the ’70s: be the nucleus and power for the economy for the next 30 years.