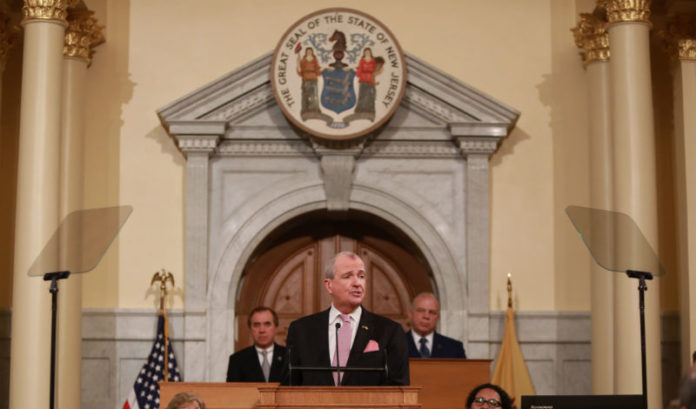 Those who favor the governor called his ideas progressive and much-needed.

Those who don’t called his speech out of touch with fiscal realities.

We’re not here to judge. We’ll leave it to you.

What follows is a quick breakdown of some of his top thoughts — and latest proposals and initiatives. They came during an approximately 52-minute speech, one interrupted with a half-dozen standing ovations — and two ovations for new Rutgers football coach Greg Schiano.

A look at some of the topics he covered:

Murphy said the cost of health care is still too high. To combat it, he announced he is establishing an Office of Health Care Affordability and Transparency within the Governor’s Office.

“(The office will) work across state agencies and lead critical efforts to reduce consumer health care costs, make insurance more affordable and improve price transparency,” he said. “And — to ensure we have the facts — I am directing the Department of Banking & Insurance to work with this new office to track the actual costs residents pay for the health care services they receive.

“Armed with this data, we will make smart decisions to limit cost increases and set new standards for quality and transparency.”

Murphy talked of the desire to integrate behavioral and physical health care — especially for our young people who are at risk for addiction and suicide — and a desire to do more to combat the state’s black infant and maternal mortality crisis.

“We will not stop until New Jersey is the safest state in the nation to give birth,” he said.

He also asked for help from the health care community.

“To be clear, we can’t do all of what I just said alone,” he said. “We need our hospitals and providers, insurers and consumers to join us in these efforts.”

“We’ve protected funding for Planned Parenthood and women’s health care,” he said. “We ended the prior administration’s eight-year-long effort to starve these critical facilities. But this must go beyond just providing funding to make up for the loss of Title X money. It’s about protecting a woman’s fundamental and constitutional right to full reproductive freedom.

“So, let’s commit to codifying a woman’s full reproductive rights in state law. At a time when these rights are under attack nationwide, let’s make it clear where New Jersey stands.”

Murphy talked about how wealth disparity is a persistent issue that separates and segregates our communities, harms predominantly black and Latino families, and prevents our state from fulfilling its potential. And talked about creating a task force.

Murphy called for more spending to improve water safety, saying it is an issue that impacts far more than just Newark and Essex County. And suggested a statewide vote to help in the effort.

“We all know this is a statewide problem,” he said. “It extends far beyond just lead in old water lines — lead paint is a much bigger problem — and it extends to our suburban and rural communities.

“When I proposed my plan for taking on our lead crisis, in all the ways it manifests itself, I did not shy from acknowledging that it will require significant investment. This is an acknowledgement shared in this chamber, as well.

“We will need funds to replace old lead lines and remediate lead paint in homes. We will need to mobilize a veritable army of union workers — plumbers and pipefitters, remediation experts, carpenters and laborers, among so many other tradespeople.

“Let’s work together, now, to come to an agreement on what this investment needs to be — so we can put it before the voters this November, and (we) can invest in our communities that much faster.”

Murphy said the committee headed by mayors Nicolas Platt and Jordan Glatt is having an impact.

“Today, we have more shared-service agreements under consideration than ever before — 980 at last count, and still more coming in,” he said. “To help these communities, we’ve enhanced both capacity and capabilities at the Department of Community Affairs to provide greater in-house assistance, and we’ve unveiled innovative new programs to spur more towns and school districts to look at new ways to work together.”

Murphy is still pushing for it; it’s as simple as that.

“Trenton tried their way,” he said. “And, history is clear — that way failed. New Jersey hobbled its way through economic recovery because their choices failed to create jobs and failed to raise incomes. They failed to keep New Jersey from falling behind.

“Together, we must choose differently. I am going to fight every day for the middle-class values that built New Jersey in the first place. It’s why I am not giving up the fight for a millionaire’s tax, so we can ease the property tax burden on millions of middle-class families and seniors and do more to help fund our public schools.

“Overwhelming majorities of residents — of all political stripes — support this. We should, too.

“The millionaires and corporate CEOs made out just fine in the last recession — and, I assure you, they will again when the next one hits. Thanks to the federal tax system, the richest 400 Americans now pay a lower tax rate than the nation’s middle class — the first time that has ever happened. The answer to ensuring we come out of any recession stronger than when we went in is not to tell the middle class and the most vulnerable, ‘Perhaps another day, but not now.’

“That choice was made in the last recession. And, the middle class paid the price.”

Murphy made another push for his proposals to get passed in the Legislature, where they have languished.

“I’ve now spent well over a year working alongside Senate President (Steve) Sweeney (D-West Deptford) and Speaker (Craig) Coughlin (D-Woodbridge), and many of you, to create a new system of incentives — one complete with greater transparency and safeguards, and common sense caps.

“Once again, I firmly believe that a targeted and responsible incentive system is important to our economic future. We all share this view, and we should have gotten this done.

“Unfortunately, the legislative session ended yesterday without a final agreement on tax incentives.

“But, today starts a new legislative session, and I am just as determined to finish this job now as I was yesterday and as I was on Oct. 1, 2018, when I first put forward the case for a new way of doing things.

“Let’s get this done now. There are thousands of jobs just waiting for us to do so.

“Let’s send a clear and unmistakable message to our people that we can successfully tackle the big issues, and that we can put the interests of our taxpayers ahead of the special interests.”

Murphy wants to change the culture of Trenton, saying he will soon announce a series of ethics reforms.

“I was also elected to move the needle here in Trenton, and to change a culture that many New Jerseyans feel is out of step with their lives, and behind the times in which we live,” he said. “That’s why all we have done to restore fiscal responsibility has mattered so much — increasing our surplus, putting away funds for a rainy day, honestly, making our pension payments.

“This is changing the culture. But we can and must do more to gain the trust of our residents and decrease their rightful cynicism. In the coming weeks, I will propose a series of ethics reforms to, among other things, strengthen financial disclosures, tighten pay-to-play requirements, expand transparency and increase awareness to the goings-on here in Trenton.

“It’s been more than a decade since the executive and legislative branches undertook comprehensive ethics reform. It’s time now for us to look at it anew, with a whole-of-government approach that ensures we all live under the same laws and play by the same rules.”

“The dawn of a new decade is a time of optimism, but we also find it a time of growing anxiety,” he said. “More than ever, we must stay true to our promises and hold firm to our commitments. And, we have already done so.

“Over the past year, by working together, we have made New Jersey a better, more hopeful place to call home. And, we will continue to do so. And, because of this, I am proud to report that the state of our state is stronger and fairer than ever.

“Now, some might say, two years into this journey, we are halfway through. I’m leaning toward saying we’re a quarter of the way through. But that is another speech for another day.”