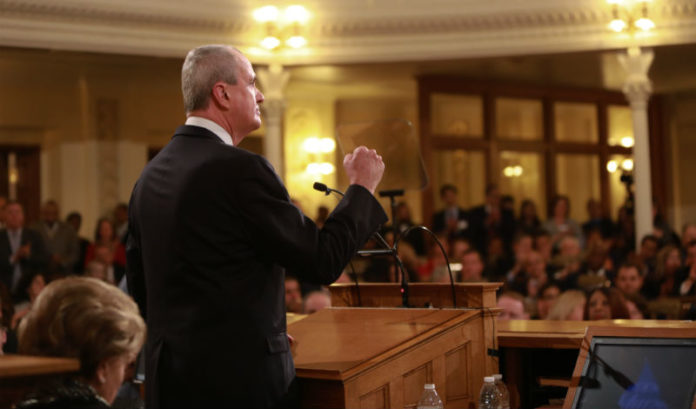 The words were powerful. And drew great applause. And a standing ovation.

“Nothing — I repeat, nothing — more exemplifies that need to change the longstanding culture (of Trenton) than the pernicious sexism and abuse that still creeps across these hallways, at conferences and in meeting rooms,” Gov. Phil Murphy said during his State of the State address on Tuesday in Trenton.

“We all must be disgusted by the stories which women — across the entire spectrum of race, age and experience — tell of their mistreatment by men who felt empowered, if not protected, by Trenton’s culture.”

After his address, the thoughts were met with equal parts optimism and skepticism.

“We’ll see if things really change,” one female said, expressing the thoughts of many.

Yes, years after #MeToo took its rightful place in society, there are far too many places where acting in the most basic of ways — you know, being polite and respectful — is still not done by everyone.

We’re not here to point fingers. And we’re not suggesting this issue is limited to state government.

“For too many years, too many people in power have turned their eyes away from behavior they knew was not only happening, but was pervasive in Trenton,” he said. “We know that Trenton is often resistant to change, and this is a most egregious failure.

“Today, I am calling for us all to work together to tear down the existing system and replace it with one that treats everyone with equal dignity and respect. I am calling on my partners in government to join me in this mission.

“And, I am calling on those who have stood idly by and allowed this behavior to flourish to start speaking up and speaking out whenever they witness injustice.”

While Murphy made it clear he feels this is a societal problem, he also was clear about who should fix it.

“To my fellow men, we can and must do better, not just by changing our own behavior, but by making the conscious choice to not ignore the behavior of others,” he said. “And, to the women listening, we will listen, and we will act.”

The words are tough, but until they are followed up with substantial efforts, most women have every right to be skeptical.

Assemblywoman Valerie Vainieri Huttle (D-Englewood), who has worked closely on issues involving safety toward women, was encouraged, but acknowledged the need for action over words.

“Gov. Murphy has never failed to sign a bill on sexual assault and harassment prevention that has passed through the Legislature,” she told ROI-NJ. “However, legislation alone cannot solve the toxic culture of misogyny and abuse that permeates in Trenton and around our country.

“While I commend the governor for standing up and calling for change, the reality is that women have been calling for and desperately waiting for men to address this issue and change their ways. The truth is, we need everyone to affirm their commitment to eliminating the tradition of toxic masculinity and patriarchal thinking.”

“Our administration has enacted several groundbreaking reforms to make our system survivor-focused, instead of geared to the protection of abusers,” he said. “Under Attorney General Gurbir Grewal, law enforcement now has clear new directives for investigating crimes of sexual assault, ensuring greater empathy for — and support of — survivors. We updated the state’s discrimination and sexual harassment policies, so they lean more directly in support of state employees who have experienced sexual harassment or discrimination.

“I signed the Sexual Assault Victim’s Bill of Rights. And, just yesterday, I signed both a series of bills to protect survivors and encourage people to speak up, and legislation to create a new commission on campus sexual assault.

“This is progress, but it is not nearly enough.

The public acknowledgement was a good start. But words mean little unless action follows. From everyone.

“The governor’s words are an important step in the right direction,” Huttle said. “But now we all need to look at ourselves in the mirror and see what we can do to change and improve our culture.”