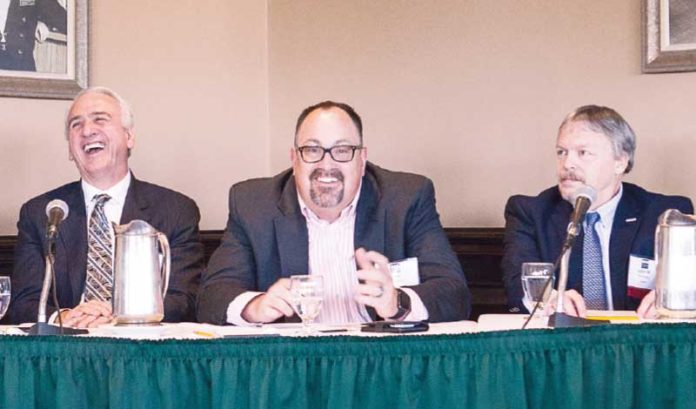 Yes, he remembers the reaction he got when he would tell members of the International Union of Operating Engineers Local 825 that automation is coming. (Not necessarily good.)

And he remembers the reaction he got when he explained how jobs are not necessarily going away — they are just changing. (Not necessarily believed.)

But, mostly, he remembers when he showed members of Local 825 a video of autonomous equipment at work on a wind farm in North Dakota.

“Suddenly, the room got quiet,” he said. “Because this is very real.”

Lalevee, the business manager of Local 825, was speaking at the recent ROI-NJ Thought Leadership Series, “Training the Next Generation: Vo-Tech’s Evolution as Your Workforce Solution.”

Lalevee said he views Local 825 as an economic development engine for the state. And he understands that means more training — continual training — both on the job through apprenticeships and prior to that, at local vocational-technical schools.

“We’ve been training operators for a hundred years now, and want to do it for a hundred more,” he said. “We’re moving along into a new world for us, one where we’re changing our educational platform to be responsive to new technology. I’m looking forward to having conversations about how we can do that and how we can work together to create pathways into a job of an operating engineer.

“It’s a part of our mission now to destigmatize blue-collar labor to make people understand that it’s a good career path — and to also put the educational piece in it, so that we can tell mom and dad we’re not abandoning the education, it’s not going to be a binary choice. We’re working on blending apprenticeship with traditional education, so that would attract people to do a lot of the careers.”

Lalevee said Local 825 is so dedicated to the cause that it is on a path to open a school itself.

“What we’re doing from an educational perspective is raising our platform to be responsive to the technology that’s coming in,” he said. “We’re operators of heavy equipment. The reality is that autonomous control is moving into what we do. That doesn’t mean the work is going to go away. That means the work is going to change. So that means we have to change — to train that way.

“We’re moving in a direction where we’re going to be able, probably sometime by the end of 2020, to become a degree-issuing Institute ourselves. It will be one where we are responsive to autonomous control, to mechanical engineering, to the things that are in the construction space and in the equipment operating and equipment maintenance space that we believe workers are going to have to gravitate towards.”

That will come with working with industry, Lalevee said.

“We’ve gotten into more conversations with employers about how we bridge the gap from a high schooler into employment,” he said. “Because, in a lot of instances, there is a space where more training is necessary and needed. We think we offer a spot in that space to talk about what a training program would look like. And we’re nimble enough to create things like that. That’s going to make this educational platform more powerful.

“Our goal is to make employers profitable. That’s what we really do: Train a workforce that comes in and makes a business succeed.”

There is no alternative path, Lalevee said, citing storage, bandwidth and computing speed as the impetus for change.

“There’s the classic change-or-die message,” he said. “When those things collide, things change rapidly and quickly.”

Lalevee is making sure the International Union of Operating Engineers is ready.

There is perhaps no better example of vocational-technical schools preparing the next generation of workers than this: There are now programs in cybersecurity.

Tom Brennan, the chief information officer at Mandelbaum Salsburg P.C., has been key to setting them up at the County College of Morris and elsewhere.

Brennan, speaking at the recent ROI-NJ Thought Leadership Series, “Training the Next Generation: Vo-Tech’s Evolution as Your Workforce Solution,” said cybersecurity needs to be seen as part of every job of today and tomorrow.

“I’ll use the analogy of real estate, where people always say that it’s location, location, location,” he said. “The difference, however, is all companies are in the absolute worst location for their business, which is connecting to the internet.

“So, as we sort of look at that as an analogy, we have to understand that everybody’s equal, connected to the same sort of premise, right? All of the different schools that I’ve associated with and assist with have programs that are very much employer-focused and trying to help contribute to what is needed in tech.

“Tech moves really fast, so good foundational components are important. Good understanding of some of the basics and fundamentals are always important.”

Brennan said the internet of things is changing everything — and making an understanding of cybersecurity even more valuable. In all careers.

“(Look at) autonomous vehicles,” he said. “One of the things they’re going to rely on heavily is GPS. What else are they going to heavily rely on? Predictive analytics for failures of systems. So, as we start looking at the cyber component, it’s going to be involved in that technology, because it really influences a lot of what we do.”

And not just in the acknowledged high-tech jobs, Brennan said. It’s all jobs, he stressed.

“From the plumbing side: You’re going to have sensors and environmental controls that need to be monitored and controlled,” he said. “And then, of course, if the integrity of the sensors is manipulated, it can cause downstream failure. (Cybersecurity) is more than just surfing the internet or encryption or ransomware.”

At the County College of Morris, Brennan said students are taught the fundamentals of cybersecurity.

“Understanding that the fundamentals of education for cybersecurity or cyber in general is the foundational knowledge of how things connect, how things interconnect, how they collaborate, is essential,” he said. “Everyone’s connected the internet equally.”

At CCM, Brennan has helped build a curriculum that addresses that. By doing so, he said he’s making sure students are prepared for the workforce, where they are badly needed.

“We’ve spent a lot of time with the county colleges developing a syllabus that is useful for current technologies in use,” he said. “When people come out and look for internships or careers, they can actually plug in with the employers because the technology’s being used is useful.

“I’ll give you a simple example. PowerShell. Today, if you don’t use a PowerShell, you’re not very current in technology in your companies. So, if you’re going to be training people on scripting and they use automation technologies, PowerShell becomes a very important aspect.”

Other examples are more visual.

“Right in my backyard happens to be Picatinny Arsenal,” he said. “Autonomy in battlefield technology is coming into place. We know this will be highly dependent in forward-facing battlefront areas that have autonomous buildings, autonomous construction, autonomous leveling, mine clearing, etc. There’s lots of interesting concepts there.”

Brennan is making sure vo-tech students are a part of this.

“I think establishing the networking relationships is extremely important because it sort of leads where we’re going to go in some of our vo-tech stuff,” he said. “And the companies that are going to be looking at the hire will be looking for those cutting-edge technologies. So that’s a draw for the students because they want to be working on modern things.”

John Kennedy, the CEO of the New Jersey Manufacturing Extension Program, always tells it like it is when it comes to workforce development.

“The problem,” he said, holding his hand above his head, “is that people want to come in up here, and not down here.”

Kennedy was speaking at the recent ROI-NJ Thought Leadership Series, “Training the Next Generation: Vo-Tech’s Evolution as Your Workforce Solution.” And the rise and fall of his hand certainly drew laughs from the crowd.

But it also made an important point.

Educating the next generation starts with giving those students a foundation they can build on. It’s why his group, NJMEP, has created an apprenticeship program in conjunction with the state — and is working with the New Jersey Council of County Vocational-Technical Schools to help with theirs.

Kennedy said he is willing to work with anyone and everyone to train workers.

“We think that we are the connective tissue between industry and education,” he said. “So, we work very closely with groups, especially with Judy (Savage)’s CTE. Our preapprenticeship programs and apprenticeship programs that we’ve developed fit very nicely into theirs. And that’s how they were developed, to get their support. But one size does not fit all.”

Kennedy talked about how his experience with German-based companies taught him the German model of apprenticeships does not necessarily work in the U.S. But that’s OK, he said. There are other paths — and they need to be shown to the next generation.

“Companies need employees,” he said. “There’s no pipeline. So, how do we create that pipeline? One way is that we have to build a foundation. That’s the CTE vo-tech schools. That’s the foundation. And preapprenticeship programs that we develop dovetail perfectly with those to bring them along.”

“We have an apprenticeship program that brings them to the next step, and that next step might be a county college,” Kennedy said. “In fact, our industrial manufacturing production technician just got eight credits from Essex County College.

“So, if you’re that kid that mom and dad said, ‘You either got to go to county or get a job,’ and then you go to county, you have no focus. And, if you have no focus, you’re not going anywhere. So, this gives them an anywhere. And it’s not an either/or. A lot of the kids that come through the CTE schools are going on to college.”

This path, Kennedy said, may lead to a job in manufacturing. A high-paying job and a lower-cost education, Kennedy said.

“If you want to be an engineer, you might not be able to afford it, but you can start as an apprentice and develop skills, get paid and then go to school and have your employer help pay for it,” he said. “All of these things are positives. And these are the things that we’re trying to work on. But the problem is that it’s a mentality thing.

More kids, Kennedy said, need to know about this. And know that they need a foundation to get to it. That can come at a variety of programs, including those found at vo-techs.

“Exposure,” he said. “A lot of our young people aren’t exposed to things. We think they are, but they’re not. They don’t get out enough into the real world and be exposed. That’s why industry needs to combine with the CTE schools, with the county colleges, and connect young people to exposure of career paths, exposure to education paths, and give them better feedback.

“Think about it. They don’t know where to go because they’ve never seen it. It’s a great thing that we can do.”

Leahy selected as next president of Monmouth University