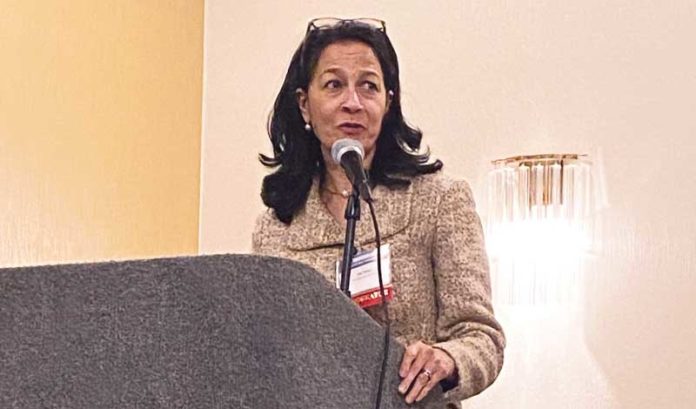 “Forbes published its Top 10 health care industry predictions, and No. 8 reads, ‘When it comes to social determinants of health, expect more talk than action,’” she said. “‘Lots of companies are talking about social determinants or drivers of health, but a close examination reveals that only a few companies are designing substantial interventions and making innovative breakthroughs in the space. Don’t expect that to change in the near future.’”

Velez then asked a critical question of the panelists: Was Forbes right?

Not necessarily, Michellene Davis said, as social determinants of health are not a “trend.”

“This is actually the revelation of individuals waking up and realizing that, when in fact you have upward of three hospitals within a particular area, like we do in the city of Newark, and black infant mortality for example is still worse than in some third-world countries, there is nothing about the newest hire of a doctor or a new MRI machine that is going to effectively change that,” Davis, executive vice president and chief corporate affairs officer at RWJBarnabas Health, said.

“This is ZIP code-based,” she said. “But these are not just issues that our Medicaid and uninsured members face — it’s everyone.”

As the former deputy commissioner of the New Jersey Department of Human Services and the state’s longest-serving Medicaid director, Harr said she often considered and worked to incorporate holistic care and nontraditional kinds of long-term services and support, such as respite care, home-delivered meals and transportation, into state policy.

And Lori Herndon, CEO and president of AtlantiCare Health System, said many organizations have had a lot of things going on around this work.

“But it is so siloed,” she said. “Even within AtlantiCare, we had little pockets of activity going on across the entire organization.

“While our vision has been to build healthy communities for many years, to really be able to organize things differently, that was one of the secrets of getting started.”

A dramatic shift is necessary for the future of health care, with nearly one-third of deaths in the U.S. being attributed to poor social determinants of health related but not limited to education, income, food security, racial integration, implicit biases and structural racism, social supports and interactions, housing and violence, said Cathleen Bennett, CEO and president of the New Jersey Hospital Association.

“If you live in New Vernon, your life expectancy is nearly 22 years greater than if you live in Trenton — and there is in no way shape or form that we can justify that type of disparity,” she said.

In fact, of the 38 lowest-scoring municipalities in the Center for Health Analytics and Research Transformation’s latest report, nearly 20% of residents lacked health insurance and 40% were on Medicaid; nearly 28% of households received food support through SNAP; more than 14% were disabled; 25% did not have a high school diploma; nearly 30% of births were to teenage mothers; more than 14% were unemployed; and individuals were much more likely to be battling two or more chronic conditions and/or mental health or substance abuse disorders.

“To me, a focus on social determinants of health is something that literally changes the lens of a health care system,” Davis said.

By partnering with small, not-for-profit, mission-driven organizations in the state already dealing with social determinants of health, RWJBarnabas Health, according to CEO and President Barry Ostrowsky, plans to move toward and test pilot a capitated model in January that integrates both clinical and multigenerational, transformative social programs for more than 60,000 New Jersey residents.

And, in addition to hiring more peer recovery specialists and community health workers, RWJBarnabas has adopted a simulation formulated by ThinkTank called the Cost of Poverty Experience, or COPE, to better educate decision makers on the historical disinvestment that has contributed significantly to systemic health care inequities.

“A lot of fortunate individuals do not know that it is really expensive to be really poor, and it is even more expensive to be above the federal poverty limit but not yet middle-class, or ALICE — asset limited, income constrained, but employed,” Davis said. “So, we’re asking decision-makers to put themselves in an ALICE’s shoes — what does it look like to have to navigate a health care challenge when they can’t even feed their family without going down to several county offices, even though they already work two jobs?”

Davis said a senior-level executive once burst into tears after finishing COPE because she realized how she had been punishing individuals who may have had to take two buses over the course of six hours to get their sick child to an appointment.

“Often, because they are 15 minutes late, they are told they can’t get another appointment for six months, when their child is still ill, and they now have lost wages from both of their jobs,” Davis said.

Herndon said that, because the data screams that social determinants of health must be dealt with, AtlantiCare recently went through a planning process with both the board and its clinical teams, who see the gaps as they are on the frontlines.

“We’re not where we would like to be as it relates to having the risk-based contracts and the capitated models, but we have to begin to move the dial,” she said. “We’re looking to reorganize, restructure and align our leadership and cross-train and bring all of our resources together in more cost-effective ways.”

Herndon said it would never be easy when no one is really paying for it.

“You have to find creative ways to find dollars,” she said. “There are great opportunities to partner, but many of these agencies are living grant-to-grant, so it’s about how we can get behind and beside some of these organizations.

“But the leadership must have the confidence that doing the right thing will balance out the risk of looking away and letting somebody else take care of it.”

Harr said she and her team at Horizon are also investing in the recognition that 60% of health outcomes are not dependent upon access to or the delivery of health care.

“As we move forward, working with eight hospital systems and community-based organizations to employ community health workers, we are using all of the rate rich claims and administrative and counter data that we as a health payer have, as well as bringing in other sources such as census data, to discover what’s happening at the ZIP code level,” she said.

HBCBSNJ’s predictive model will be rolled out over the next three years to help identify members of a community that could benefit from further engagement with partners, especially those who are predicted to have future high spends, multiple medical admissions, and various social barriers.

“I can’t overemphasize the collaboration we then have to take our learnings and apply it not only to Medicaid members, but to everyone,” Harr said.