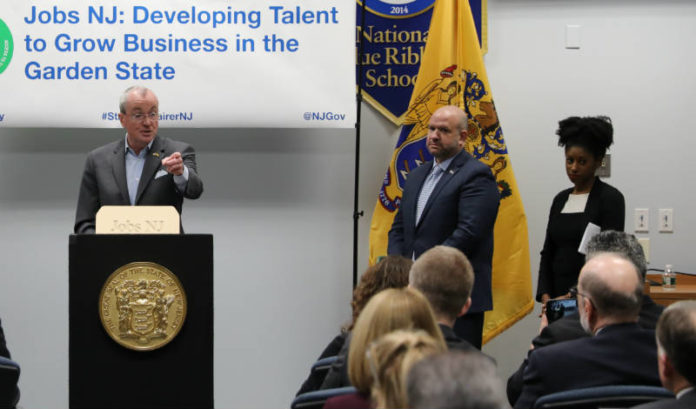 The Jobs NJ program unveiled by Gov. Phil Murphy on Wednesday is based on a simple premise: Give residents access to better education and training and give employers access to highly talented employees.

And, while Jobs NJ has numerous goals and initiatives, the program’s creators said it can be best summed up in three ways:

Robert Asaro-Angelo, the commissioner of the Department of Labor & Workforce Development, said the program pulls together many of the successes his department has had.

“I think it’s doubling down on what we’ve been doing and found success in,” he said. “This is our two-year marker. (This week) is the two-year anniversary of the Murphy administration, so want to show we’ve worked together on what’s been successful.”

Asaro-Angelo spoke with ROI-NJ after the announcement. Here is some of the conversation, edited for clarity.

ROI-NJ: Let’s start with the numbers you want to reach by 2025: Having 65% of residents earning some type of post-secondary credential, increasing the number of post-secondary graduates employed in high-demand industries by 10%, completing the talent roadmaps for at least 100 companies. We could go on. Talk about these lofty goals.

Robert Asaro-Angelo: I think that numbers are a big takeaway for this. We have numeric goals for a lot of the things that we’re doing, whereas, in the past, we sort of just said, ‘Let’s try this and see if it works.’ So, we’re going to be measuring a lot, which I think is important.

Look at our 65-25 goal, which is the attainment goal of having 65% of New Jerseyans having some type of credential by 2025. Some counties are already there, some counties are way behind. And it obviously matches up with the unemployment numbers being higher in those counties. So, what can we do as a statewide network to make sure that we’re plugging them into the same opportunities as somebody has elsewhere?

ROI: The goals get even more specific when talking about members of the underserved communities — including goals of ensuring 250,000 additional black, Latino and Native Americans attain post-secondary credentials and that the desire to close the racial and gender wage gap and employment gaps by employing 42,000 more women and minorities and increasing wages by $15,000-$23,000. Talk about the need to help these communities?

RAA: Apprenticeships have been hugely successful for us — not just in filling the needs of employers starting careers for students, but also increasing diversity in our workforce. Our funded apprenticeship diversity numbers are through the roof. We’ve more than doubled the rate of African Americans, Hispanics and women compared to regular apprenticeship programs.

These are ways that we can bring in these disadvantaged communities, folks who’ve had historic barriers to employment. We can bring them in. Not just to get a job, but to fully integrate them into our career development systems. We want to get them into career training and get them into jobs that give them a career.

I think that’s been lost. As the governor mentioned, we’ve had eight years of prosperity, but we haven’t prepared for the next downturn. Now, we’re trying to do that. We are hitting almost all the marks as far as what our economy should be doing in New Jersey. The one thing we’re not hitting is letting employers know there are employees out there ready to do these jobs.

ROI: This connectivity of employers to employees and employees to jobs is a key to all this. Talk about the New Jersey Career Network, an initiative the state is calling a digital coaching and support platform for job-seekers?

RAA: This was set up specifically for the long-term unemployed, but it also will be a great base for other folks to connect to our workforce system. Not everybody has time to go to a one-stop career center. So, this app will make it easier for folks to get information about what training is available to them, what training is valuable, which training providers are worth going to and not just trying to take their money and which credentials are in demand in the area that they’re living. All of this will make it much easier for them to access the employment system.

I think right now, in our low-unemployment economy, employees need to focus on the fact that this is an employee market. People need to be doing things to better themselves, not just for their own family’s bottom line, but also for their future. They could have a good job now, but can we help them get them more certificates, more training, so they’re ready for the next job that comes down the road?

ROI: This all sounds great. There are a number of departments involved and you all get along. But you’ve been around government enough to know that, the broader you get, the more stagnant you get. Who’s going to run point on this? Many would look at Labor as the biggest player here.

RAA: You’re right, Labor will be in the middle of all of this. The easy answer is that the governor is running point, but I think the plan is so broad that there’s going to be different points for each idea. I know it sounds like government-speak, but we work together all the time. We’re like students in college preparing for an exam. And that does flow down and that does make a difference.

The idea of having placement for apprenticeship through schools? That was never even thought about before, because no one in my department would think to even ask Education about doing stuff like to reduce stigma for apprenticeship. So, I think we’re all going to be running point on different parts of it. There’s no doubt about that.

ROI: There are a lot of moving parts here. One of the biggest is going to be educating folks that these programs and initiatives are out there. Talk about how you can do that?

RAA: This always is the challenge. I often say at events, ‘I’m glad to have everybody here, but I’m concerned about who’s not in the room.’ Often, those are a lot of the folks that we’re trying to reach. So, we’ve spent a lot of time on this. Our department has a strategic planning and outreach office to make sure we’re talking to targeted communities, whether they be immigrant communities, communities of people of color, parts of the state that had never had this kind of work before.

We can also target folks digitally, meeting people where they are. If you’re looking for a certain job in a certain community, you’re going to get an ad for the New Jersey Career Network.

And there will be the governor’s choice employer program, where we’re going to be calling out employers who are doing it right, who are working with other competitors, who are developing a talent ecosystem and providing good benefits and good leave policies. These are ways to get folks in disadvantaged communities a way to enter the middle class and stay there, but you need a huge marketing push just to tell them there’s an opportunity.

And I think we’re going to start marketing our positive worker benefits out to folks in other states, maybe neighboring states. If you’re somebody coming out of college or somebody coming back from the military and looking for a job and to start a family, we want you to know there is no better place for you to be in New Jersey.