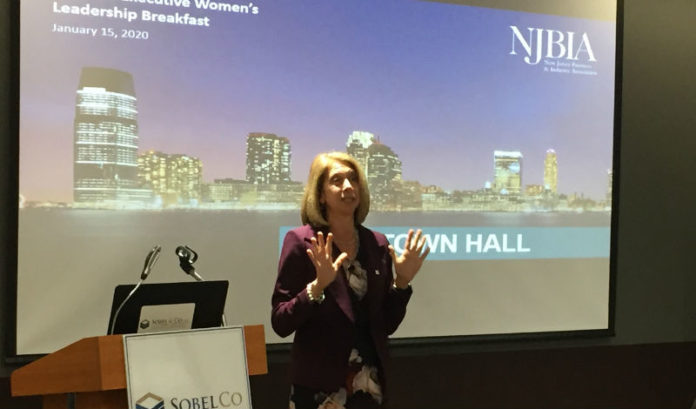 Following Gov. Phil Murphy’s State of the State address Tuesday in Trenton, Michele Siekerka said she is fired up.

“We just came out of an extremely intense ‘lame duck’ (legislative session) where we fought like crazy to push back bad policy for New Jersey business, our taxpayers and nonprofits, and things that address the issues of lack of affordability and regional competitiveness in the state,” Siekerka, CEO and president of the New Jersey Business & Industry Association, said.

As head of the largest state-level employers’ organization in the country, Siekerka worked to inform the majority female audience of New Jersey’s strengths, weaknesses, opportunities and threats — and then asked them, as businesspeople across the public, private and nonprofit sectors, what their particular issues and solutions were.

“We have an extraordinary opportunity to leverage the intersection of business, academia and government by building coalitions and working together in a collective way to move the needle,” she said.

However, nearly every New Jersey asset Siekerka listed was also weighed against a negative.

“For example, we are No. 1 in the nation for kindergarten through grade 12 education,” Siekerka said. “But Massachusetts, No. 2, delivers it at half the cost we do.”

Yes, New Jersey has a highly educated workforce, with more scientists and employees with doctorate degrees per square foot in the state than in the entire world. Yes, our location is amazing, with access to the shore and the mountains while being nestled between and having direct access to New York City and Philadelphia, as well as Boston and Washington, D.C.

“We also have affluence, density and diversity,” Siekerka said. “As the densest state in the county, we have more consumers per square foot that can buy, make, do and sell things.

“But how is it that we can be the most affluent and smart and still be in last place?”

Siekerka said it is because New Jersey’s assets are not being properly leveraged.

“For example, our mass transit system is logistically set up to be the best in the nation, but who hit traffic today coming here?” she said. “Our strengths are not being mined well enough.”

Then Siekerka really got into the state’s weaknesses.

“We lack affordability; we have the highest property taxes in the nation; we have an incredible overall tax burden,” she said. “We have continued workplace mandates that our small and Main Street businesses, especially, cannot afford, and we have continued outmigration of wealth and workforce.”

For example, New Jersey is No. 1 in the nation for outmigrating those between the ages of 18 and 34, Siekerka said.

“That’s our future workforce,” she said. “We spent on average $22,000 per pupil per year times 13 years educating that workforce — why do you think all these out-of-state schools want our kids?

“We’re also No. 1 in the nation for those between the ages of 18 and 34 still living at home with their parents, which screams a lack of affordability.”

That is, if their parents even still live here.

“A ‘snowbird,’ years ago, was someone who left after Christmas and came back at Easter because their family was here,” Siekerka said. “Today, ‘snowbirds’ live six months and a day outside of the state of New Jersey.

“Over 13 years, we have lost $28 billion of adjusted gross income — the wealth we built here has left the state.”

This does nothing to keep us from falling off the state’s current financial cliff, she said.

“Our long-term debt has increased 382% over the last 10 years,” Siekerka said. “At the same time, our revenue has only increased 23%, and our expenses have increased 45%.”

All of this and more is why the New Jersey business community’s outlook for 2020 is the lowest it’s been since before the recession, Siekerka said, despite a strong economy.

“Right now, the business community is freezing their wallets going into 2020 because they fear the policies that are being directed toward them over the next year or two, and then they fear a recession on top of that,” she said.

Increasing state revenue will not help if the system remains broken, she added.

“If we’re going to raise any more revenue in the state of New Jersey, right now, it is like opening up the window and turning the air conditioning on,” Siekerka said. “We don’t need to derive more revenue — we need to spend it more wisely.”

Review NJBIA’s “2018-19 Blueprint for an Affordable and Competitive New Jersey” and its 2020 Budget Insights at www.njbia.org/advocacy/.

Christies to launch N.J. Fund, which will give forgivable loans to...