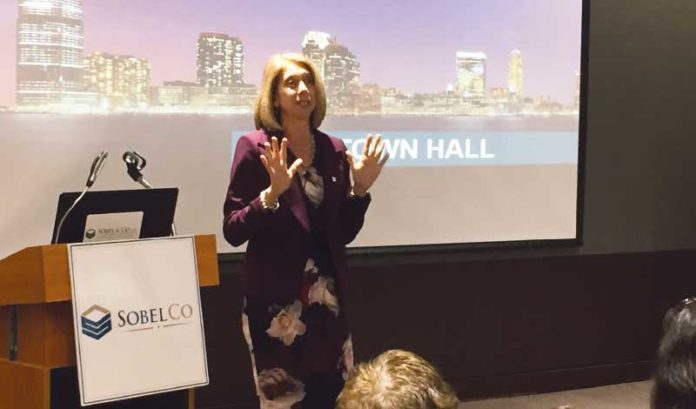 As CEO and president of the New Jersey Business and Industry Association, Michele Siekerka serves as an educator and advocate for, and a facilitator between, New Jersey businesses, academia, policy-makers and nonprofits to identify important issues and put forth recommendations on how to solve them.

“I can speak all day,” she said, as she conducted a New Jersey “town hall” meeting last Wednesday at SobelCo’s Executive Women’s Leadership Breakfast in Livingston. “But, if I’m not engaging and sending you away with actionable insights, and vice versa, we’re not moving the needle.”

As head of the largest state-level employers’ organization in the country, Siekerka worked to inform the majority female audience of New Jersey’s strengths, weaknesses, opportunities and threats — and then asked them as businesspeople across the public, private and nonprofit sectors, what their particular issues and solutions were.

“We need every citizen and taxpayer, including millennials and college students, to step up and vocalize,” Siekerka said. “It starts with you and your community.”

Everyone in the room, from small businesses to nonprofit leaders, from corporate executives to members of the gig economy, from government employees to consultants, chimed in with both their concerns and their solutions, with Siekerka responding to each.

Here’s what they had to say.

Audience member: It’s been delayed, but the proposed independent contractor bill, S4204, is going to hurt a lot of small businesses and self-employed people and drive more people out of state. As for me, I’ll just hire a contractor from Pennsylvania to do my graphic design.

Michele Siekerka: The idea is to redefine what an independent contractor is in the state of New Jersey, but if you want to understand what the consequences are, look to what’s going on in California right now, where they passed a similar bill, now in litigation. … This will change the entire dynamic of our relationships with employees and independent contractors, not to mention that it will totally kill the concept of the gig economy, which many people want today. … This all started because of misclassification, with companies who ‘weren’t taking care of their employees by ripping them off with benefits and not paying fair compensation.’ But, on the other side of the equation, we have an entire workforce who do not want to be deemed employees. They don’t want to be subject to the terms and conditions of that company, their schedule, their workplace policies — they want to be independent. That’s the gig economy and that is where the next generation is going, and this will stifle that. We talk about encouraging innovation here in the state, but the entrepreneurial spirit will be crushed if this goes through.

Audience member: With it comes a lot of stigma, fear, confusion and controversy, but I believe that cannabis and alternative plant-based healing therapies present such an opportunity for business and the economy. Not only do we all need open minds, but also we all need to be part of the conversation, whether we touch the plant or not.

MS: In the last session, which just ended two days ago, the Legislature passed a bill to put legalizing marijuana on the referendum in November. It has to pass in two consecutive sessions. They are going to take it up early in the session, so there is a 99.9% chance it will be on the ballot in November. … Some say there is between $400 and $600 million to be earned and thousands of jobs to be created, but, on the other side, businesses are concerned about safety, so we just have to do this in a responsible manner.

Audience member: Where does all the money go? I would very much like to understand more about that, especially when we have such high taxes.

MS: Toward our long-term debt. … I was a public worker. I worked in government for just shy of five years. I served on a school board for 12 years. I highly respect those in public service, including teachers, police and everyone in Trenton. … I am not suggesting for one minute that we take away what we promised them; however, there are clearly defined studies that show how we can reform New Jersey’s pension and health care system in order to achieve maximum savings for the other 60% of New Jersey residents to get this debt off our back. But nobody has the political will to take it up because of the strength of the unions.

Audience member: My husband and I are both born and bred Jersey kids — we don’t want to leave. But if we retired in upstate New York, we could do it tomorrow with what we have saved. We figured out that if we want to do that in New Jersey, we’re working for at least another 10 years.

MS: A recent study said that over 50% of New Jersey residents today contemplate retiring outside the state. We come here while our children are in school because New Jersey is No. 1 in education; then, when we outmigrate the kids, we’re left wondering why we’re paying $20,000 in property taxes when our kids aren’t even in school anymore. My husband and I tried to downsize, but we ended up deciding to keep our house because I said I wouldn’t buy another property in New Jersey, and I won’t leave right now.

Audience member: New Jersey has the highest percentage of people working for nonprofits; however, due to the state and local taxes, giving to nonprofits is down this year, and businesses are not spending. I would therefore like to suggest that there be no taxes for people who work for nonprofits.

MS: When accountants and lawyers help ‘snowbirds’ spend six months and a day outside of New Jersey, they have to show that their clients are cutting ties with the state of New Jersey, including philanthropic giving. … While building continues at the Jersey Shore, it’s those ‘six-month-and-a-dayers’ who are building those homes. They’re willing to pay property taxes at the Shore because south of Atlantic City is fairly affordable, but we’re not getting their income tax.

Audience member: There are many entrepreneurs wanting to move into our area, but they are having difficulty getting through government — it’s making folks reconsider, as it is just not healthy for them to continue to spend money while waiting long periods of time for even the most basic things with which to start a business.

MS: We have to get rid of some levels of government in the state of New Jersey. That is part of the reform package. We’ve got municipalities, school districts, county government, different types of authorities and authorizations, and state government. Businesses trying to start up often have to deal with three or more different entities, and there is a lack of coordination. … What I recommend is that you direct those people to your local chamber of commerce, because they know the players in the region. Ask, can they help this business find their way to a Business Action Center? Can they introduce them to someone at the city level who can help them with permitting?

Audience member: We have workforce development programs, but we struggle to get our young graduates to the jobs available to them because our transportation system, when it works, is set up to move people from New Jersey to New York or Philadelphia, and not necessarily to move people within New Jersey to jobs in-state. My solution is a comprehensive analysis of our transportation system.

MS: A 10-year Master Plan for New Jersey Transit is set to be released within the next two months, with a five-year capital plan attached. The other piece of this is to look for unique ways to move people. For example, for manufacturers located in industrial parks in Mercer County, we found local extensions and connected with county freeholders to get employees a bus back and forth. It’s not as successful as it should be, but there are opportunities in which to begin using county resources at the local level, too.

Audience member: The way New Jersey is structured, with so many municipalities, individual school districts and town-specific fire and police, is just not sustainable. My solution is shared resources, particularly amongst municipalities in a particular county.

MS: This is part of the reform agenda — and, I heard that there are some 900-plus shared services contracts in the works. … But, in your own community, what kind of discussion are you having? Are you OK with having a regional school district, police and fire department? If you’re not willing, we can’t solve it, because you are the ones who vote. We often hear at the local level, ‘My residents aren’t willing to give up their schools,’ so we can’t share services there. Or, we hear, ‘My residents want to make sure a cop is around every corner,’ so we can’t try countywide policing. … We have to be honest with ourselves and ask what we are willing to give up, because we can’t afford to live in our neighborhoods anymore. If you’re not willing to be part of the solution, nothing will change. And if you are, you need to vocalize it at the local level. You need to get people talking to X, Y, and Z towns with shared services so they can learn more. And, we need to create incentives for municipalities to begin considering shared services.

Get involved with OpportunityNJ, a nonpartisan, grassroots coalition comprised of New Jersey interests representing employers, employees, business, trade groups, community organizations and other concerned citizens in the state, at opportunitynj.org/.

2/3 of execs ready to attend in-person events now, according to...