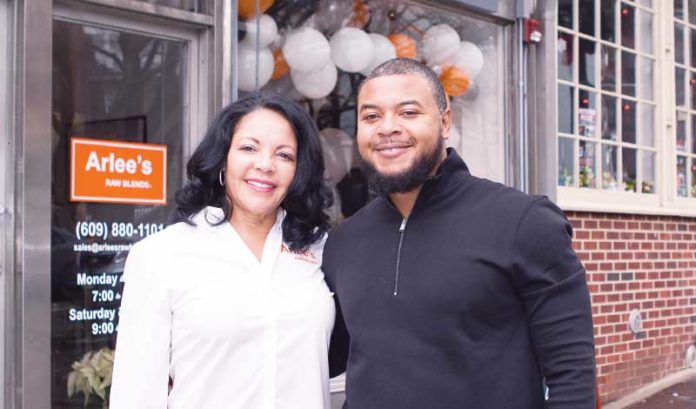 Paula Taylor originally thought the idea of a cold-pressed juice business was good enough to warrant a drastic change in lifestyle.

Now, nearly six years after opening Arlee’s Raw Blend in Princeton, Taylor said it’s the perfect time to capitalize on a movement and open a second location in Trenton.

“People are more aware of the health benefits,” Taylor, the co-founder and owner, said. “Plus, establishing a permanent storefront here in the capital city fulfills a longstanding dream for my brother and me.

“I am very grateful to the New Jersey Economic Development Authority for helping us turn this dream into a reality.”

It all began when Taylor’s sister-in-law, Arlee Moore, began preparing her own fresh juices for a post-pregnancy 21-day cleanse. However, when she returned to work in Philadelphia, she could not find a local store that sold them ready-made.

Brian Moore, Taylor’s brother, decided to help his wife continue making them. Then, her employees began asking for them, too.

“My brother came to me and asked if I would like to see if there was a market for this with him,” Taylor said.

Taylor had worked as a reinsurance broker for 16 years before leaving the workforce to raise her children and increase her commitment to nonprofits and community-oriented boards, such as the Young Scholars’ Institute and UIH Family Partners in Trenton and the foundation boards for Mercer County Community College and Penn Medicine Princeton Health.

“But I raised my brother after our parents died 36 years ago from breast cancer and heart disease,” Taylor said.

This encouraged both of them to be more committed to nutrition, health and wellness.

“We’ve since tried to eliminate preservatives and pesticides in our bodies by eating clean and avoiding processed foods,” Taylor said.

Their mother and grandfather had also operated a large farm in Georgia, so they already had working knowledge of the different kinds of produce available.

A completely organic juice bar happened to fit in well with both their values.

So, the siblings began selling cold-pressed juice at a farmer’s market in Trenton in 2013.

“But customers from Princeton, where I live, encouraged us to open a storefront, because they already were ordering juices from New York and California and wanted them more than once a week,” Taylor said.

It is now a profitable business that currently employs nine and offers a variety of fresh, organic, raw, cold-pressed juices and coffee blends, as well as locally grown, organic raw and vegan foods, such as salads, rice and vegetable bowls, wraps, dips, and even pizza, pasta, and desserts.

“We specialize in juice cleanses, because that is what our juice should be used for, as well as meal replacements,” Taylor said. “Cold-pressing fresh juice ensures the nutrients and enzymes stay completely intact if you drink it within five to seven days.”

The juices are all made fresh daily.

“We have organic perishable produce delivered daily or every other day and, therefore, need to gauge how much to make,” Taylor said. “You also need a lot of staff to prepare the fresh ingredients.

“That is a real challenge in a business where the profit margins are slim.”

“But the health benefits are numerous,” she added. “Collaborating with gyms, yoga studios, nutritionists and doctors has definitely helped to create awareness and increase our profits.”

“When you start eating cleaner and healthier, your body gets the nutrients it needs, and you are less hungry,” she said. “Once you get rid of all the fake food, you’ll end up paying less over a period of time.”

Offering more nutritious options for the community is just one of the reasons why Taylor said she was excited to open a second location in Trenton in December with support from the NJEDA.

“Everyone needs healthy foods — not just those who live in affluent areas,” Taylor said. “We love this city and it has been very good to us.”

The NJEDA’s Small Business Lease Assistance program reimburses businesses and nonprofit organizations in 13 cities up to 15% of annual lease payments for two years when they rent up to 5,000 square feet of market-safe, first-floor office, industrial or retail spaces for a minimum five-year term.

“They are going to help subsidize our signage and will also be assisting us with discounted parking for both our employees and customers,” she said.

“We’re going to be adding organic superfood bowls with acai, banana, chia and more superfood smoothies to our menu, too, since we’ll be in a bigger space,” Taylor said.

Moore will manage the second location and its more than eight employees, while Taylor remains more active at the Princeton location.

“Then, eventually, we would like to open more stores,” Taylor said. “That is what we are working toward.”