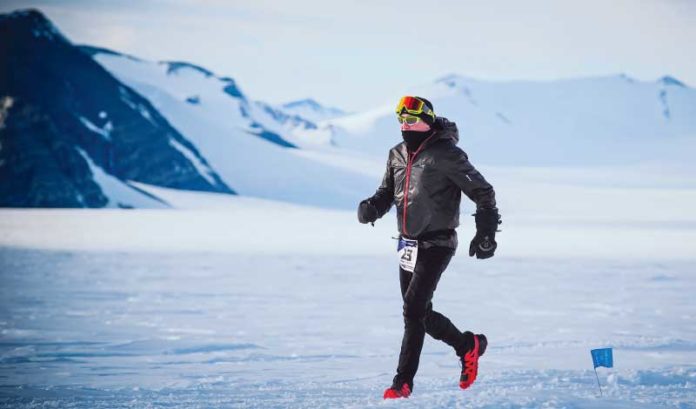 It’s hard to pick out just one of the challenges you need to overcome to run a marathon on Antarctica.

That’s why Old Tappan’s Steven Jomides laughs while rattling off a few: the feel of the course (it’s called “The Ice Marathon” for a reason), the clothing (how many layers, and of what?), the temperature (right around 0 degrees Fahrenheit) and the wind (20-30 mph, which give it a wind chill of -15).

And it’s why the 58-year-old Jomides jokes about some of the training methods he heard from his fellow competitors a few weeks back.

“I met a couple from the U.K. who put treadmills inside box freezers to prepare,” he said. “Some people trained in sand because that’s the closest you can come to imitating what it’s like to run in snow.”

That’s why, when he went to a starting line that was about 500 miles from the South Pole with 59 other competitors from 19 total countries on Dec. 13, Jomides figures he felt the same way everyone else there probably did.

“I was scared,” he said. “I didn’t know what to expect. All the training in the world couldn’t prepare you for this.”

The Ice Marathon was the latest marker in his quest to run a marathon on all seven continents.

“Every time I do a marathon, I meet great people and smart people,” Jomides said. “The beauty of all this is that I learn something from somebody. There’s always a takeaway.”

These takeaways, he said, not only help his own personal growth, but that of his company, Lawns by Yorkshire.

Jomides said the lessons he’s learned from running have helped him grow a business he started in 1988 to what it is today: one of the largest commercial landscaping companies in the state, with more than 100 employees.

“The three biggest takeaways that I’ve learned from running are humility, discipline and patience,” he said.

As well as learning how to run on ice.

Jomides took to running later in life. He said he wasn’t much of an athlete at Pascack Valley High School back in the ’80s.

“I had a very short wrestling career,” he said.

As an adult, Jomides began training in martial arts, earning a distinction as a third-degree black belt in 2006. That training, he said, inadvertently turned him on to running.

“Part of the black belt test involves a run,” he said. “It’s not long, just a couple of miles. But I wanted to do more than just survive. So, I started running recreationally. And then I started running more and more. It’s addictive. And then, in 2013, a friend asked me, ‘Do you want to run the New York City Marathon?’”

He figured, “Why not?” Halfway through the marathon, Jomides, then 51, figured out he had made a terrible decision.

“I was like: ‘This really stinks. I don’t know why I’m doing this. It’s horrible. I’m never doing this again.’

“But, a couple of days after, I said to myself, ‘You know, if I would’ve just done this or corrected that, I would’ve done a little bit better.’ The next year, I ran it again and did really well.”

He and his wife, Andrea Jomides,  began doing fundraising for the New York Road Runners club, which helped him gain an entry into the Boston Marathon in 2015. He ran New York again in 2016 — struggled to finish — and again decided to call it quits.

Then, his wife read an article in the New York Times. The story described what it called the ultimate marathon, running the bush, or a game reserve, in South Africa.

The passion was back.

Jomides said marathon running is about so much more than just the challenge of finishing. It’s a teaching tool, he said.

“Humility comes because there’s always somebody better — always,” he said. “Doesn’t matter the age — it could be a 16-year old — or the gender. And I have great respect for every other runner, whether I finished before them or after them.

“That translates to the business world. Don’t judge anyone by their age or gender, and always assume there are plenty of people smarter than you are.”

The discipline, he said, comes with the training required to run long races.

“I used to check the weather all the time,” he said. “Then somebody asked me: ‘Why do you do that? You’re going to run no matter what it is.’

“You don’t win every contract. You don’t keep every team member in your company. But you keep coming back, day after day.”

Those two things help develop a patience that pays off, Jomides said. And is part of the ultimate metaphor.

“I always say business is not a sprint, it’s a marathon,” he said. “Slow and steady wins the race. That’s how you grow your business. We’re a commercial landscape firm. It would be great if somebody came to us and said I want to give you my entire portfolio, 30 properties. But that’s not how it goes. I want to get one, do a good job, and then get three or four or more. Eventually, I’ll get them all.

The marathon in South Africa got Jomides thinking. Or rather, it got him listening. The exclusive event, in June 2018, drew runners from all over the world.

“It was my fifth marathon, so I’m kind of a fly on the wall listening to everybody speak,” he said. “I heard people saying they’ve run 100 marathons. Others said they’ve run one in all 50 states. My head starts spinning.

“Then I hear someone say they’ve run one on all seven continents. And, even though Africa was my first race outside of North America, I said, ‘I’ve got this.’”

The quest was on.

“I immediately registered for the marathon in Bordeaux, France, which was in September of 2018,” he said. “In that one, you ran through the wineries; it was really fun. At the water stops, they have red wine, white wine, they have oysters, chocolate and cheese. And it was amazing. And you get sucked into this, saying, ‘I’ve got to get another continent.’”

He added races in London and Berlin. Then, in May 2019, he added South America, when he ran a marathon on Easter Island.

“That was amazing,” he said. “It’s been a lifelong dream to see the statues there.”

Four continents down, three to go. The next scheduled stop was the Australian Outback in July. It was here that Jomides got a reminder that marathoning is hard.

Jomides said he trains five days a week (one long run, 15-20 miles, and four short runs, 4-6 miles). Five weeks before Australia, he badly injured his ankle. His doctor said he needed to be in walking boot for eight weeks. Jomides said they eventually compromised — and he didn’t run at all until the event.

“I got wrecked on that marathon,” he said. “But I didn’t fly to Australia to not get that continent.”

The same went for Antarctica.

This passion is not cheap.

Jomides likes to involve his wife and two college-age kids whenever possible. They all made the trip to South Africa.

He admits his successful business affords him the ability to do all this.

“It’s not inexpensive,” he said. “But, on some of the more exclusive trips, like to Antarctica, it’s worth it. You are usually surrounded by top business executives and business owners.”

On March 1, he’s scheduled to run a marathon in Tokyo. The event not only will give him the continent of Asia, it also will mean he has run the six world marathon majors (New York, Boston, Chicago, London, Berlin and Tokyo).

“It will be the completion of my tour,” he said. “My goal was to complete the six world majors and run a marathon on all seven continents. I’ll do it both in one race.”

Which will leave him with only one thing left: finding another goal.

It’s called the “World’s Coldest Marathon.” And for good reason. It’s not only at the Geographic North Pole, the course is 6-12 feet above 12,000 feet of Arctic Ocean in subzero weather, the website says.

The trip includes a helicopter flight to the starting line. And, of course, a free T-shirt.

Jomides said he’s going to approach it the same way he did the Antarctic Marathon.

And ready for another marathon moment.