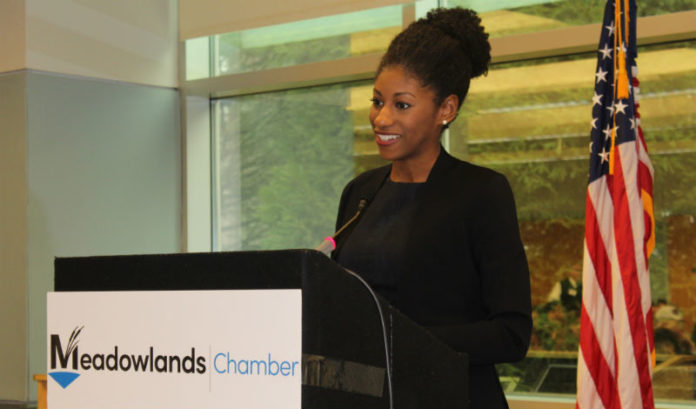 For Secretary of Higher Education Zakiya Smith Ellis, the Jobs NJ program introduced by Gov. Phil Murphy last week comes down to a simple sentence that can be so telling:

“No one goes to college thinking that they are not going to finish,” she told ROI-NJ. “But, too many of our students do not finish. We’ve got to do whatever we can to ensure that once they start, they finish. That will have a huge impact on workforce development and our economy.”

Smith Ellis was speaking after Murphy announced the program. It’s one Murphy said is designed to make sure employers find potential employees with the skills they need — and to make sure students get those skills.

Murphy said many of the ideas are not new, but that they are being packaged together with oversight — and target goals — like never before, to get the desired results.

“Jobs NJ is the answer to the question I often get asked first by businesses looking to locate to, start in or grow here in New Jersey: Do you have the workforce that we need?” he said.

Smith Ellis knows that often begins at the post-secondary level. Her goal is to ensure high school graduates get the next-level training they need.

“(Jobs NJ) builds on our higher education plan,” she said. “That plan said we needed to focus our attention on some target populations. (That’s why) we are committing to get 250,000 more African American, Latinx and Native American students across the finish line to earn a post-secondary credential.”

In order to do so, Smith Ellis announced the state has created the Opportunity Meets Innovation Challenge. Simply put, higher education schools that best implement the best practices that came out of the working groups for the state’s higher education plan will be compensated.

Smith Ellis also noted that the program is not geared to just traditional college students.

“We think about (post-secondary students) as kids, but there are a lot of adults who are seeking a post-secondary credential,” she said. “It may be that they are starting at a community college.

“Something we’ve talked to our community college partners about is getting more adults into that pipeline. We’re also committing to getting 25,000 more adults some kind of post-secondary credential by 2025.”

The key, Smith Ellis said, is the quality of that credential.

“When they go, it’s not just any credential — we want to make sure they are working in things that are relevant and they’re getting the skills that they need,” she said. “So, it’s making sure we are increasing the number of those graduates who are employed in high-demand industries by 10%. That may not sound like a lot, but that is huge in the demand for the industries that are growing.”

Smith Ellis said those credentials and post-secondary classes will be designed in conjunction with business and industry, using both anecdotal evidence and labor data in the process.

Murphy said all of this is vital for the state’s future.

Murphy said having so many departments work together will be the key to the program’s success.

“Jobs NJ is a combination of a lot of things that we’re doing already that we’re sort of codifying and putting under one roof, as well as some new steps,” he said. “I don’t think we could aspire to do that whole notion if we didn’t have the extraordinarily good relationships across what too often in the past have been stovepipes in government.

“I give an enormous amount of credit to my colleagues, who have made it their business to ensure that there are no barriers or walls between or among our various government departments and agencies. Because we have that confidence, we can forward a program like this because we know we can take a lot of things that are happening in different places and put them under one roof so that it’s actually effective.”

Tim Sullivan, the CEO of the EDA, said doing so is part of the governor’s overall economic plan, which was introduced in October 2018.

“One of the things that marked (his) approach and marked that strategy as different than anyone else in New Jersey and across the country is that it is a people-centered plan, how people are experiencing the economy with good-quality jobs,” Sullivan said. “The first chapter of that plan is investing in people.”

“As we sit here right now, we have an unparalleled competitive advantage as it relates to talent,” he said. “Every single conversation with business leaders centers around talent, infrastructure and location. But that’s an asset that can erode very quickly, particularly in a highly competitive, changing economy. And if we’re not making the kind of investments in workforce development and in economic development, we could lose that competitive advantage, and that would be a shame — and it would render us in a much more challenging position to compete long term for the businesses of the future.

“Talent is the most precious commodity of the 21st century economy, and every investment we make in our people is important.”

Murphy signs Emergency Bond Act into law: ‘This is, by no...