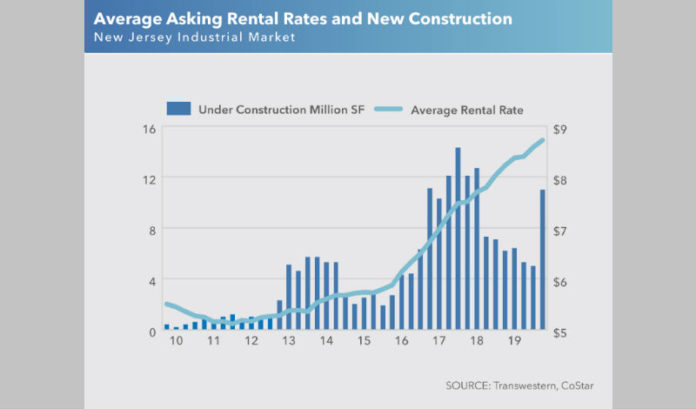 “The scarcity of available land, especially in northern New Jersey, has slowed development in the past couple of years, and most new construction has been leased up quickly,” Alex Previdi, managing director at Transwestern, said. “Following exhaustive searches, challenges with rezoning and environmental factors, developers have replenished the construction pipeline heading into 2020.”

Rents are trending higher, although at a slower pace, up 6.1% from a year ago. Rents were higher in 17 of the 25 submarkets, led by Exit 8A and the Hudson Waterfront.

E-commerce has impacted the industrial market in a positive way, creating reserve logistics, or the need for separate facilities to handle returns directly by the originating retailer or third-party logistics provider. At the start of the decade, Amazon didn’t occupy any industrial properties in the state, but by the end of 2019, it had absorbed more than 12 million square feet.

“Industrial real estate will remain the preferred asset class for investors and will also be the safest investment during periods of economic uncertainty,” Matthew Dolly, research director at Transwestern, said. “E-commerce was the catalyst for demand during the past decade, and recent reports of record-setting online shopping points to continued prosperity in the industrial market heading into 2020.”