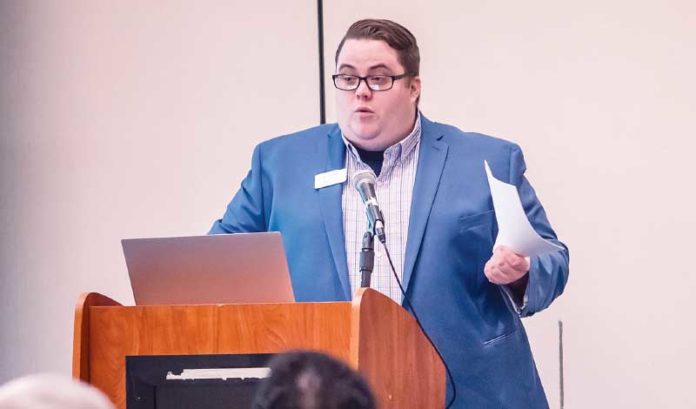 Rutgers University will open its first LAN Center, a space with gaming systems and computers that share a localized network, on its Piscataway campus in just a few weeks.

The idea is to invest in the growing industry of esports, or the use of electronic systems to test one’s skills against live human opponents in multiplayer video games.

“There is a wide variety of universal skills that can be developed through the practice of competing on an esports team, either online or in person at a LAN center,” said Michael Fay.

Fay, the former director and head coach of the esports competitive video gaming program at the University of Akron in Ohio, said he was hired in December to head the new esports center at Rutgers University.

Fay spoke on the subject of esports with his new colleagues at EdgeCon 2020, dedicated to advancing the practice of digital transformation. The annual event is hosted by NJEdge, a statewide nonprofit technology services provider and member-driven consortium for educational, health care and government organizations.

“There is a draw here, not just for students interested in esports, but, also, research indicates that having this competitive program and center will draw more STEM students,” said William O’Brien, executive director of student centers and activities at Rutgers University.

The significant academic investment in both industry and infrastructure due to the legitimization and monetization of professional esports was readily apparent at this year’s multiday conference at the Ocean Place Resort and Spa in Long Branch.

“There are even academic scholarships out there, now offered by more than 200 institutions to students entering college,” said Neela Patel, senior director of student centers and activities at Rutgers University.

And that’s just the beginning.

While the jump into esports may seem sudden for New Jersey higher education institutions, esports have existed in the U.S. for decades.

“The first esports tournament happened back in 1972, when students competed against each other in ‘Space Wars’ at the Artificial Intelligence Laboratory at Stanford University,” Fay said. “But the catalyst was the internet — as speeds got faster, multiplayer gaming caught on.

“Thanks to the internet, young people today now have the tremendous opportunity to compete against millions of players around the world.”

In Korea, for example, the government formally recognized esports in 2000 with the creation of the Korea eSports Association, which now manages 25 esports in the country, including regulating competitions, team management and business sponsorships.

And, in the U.S., major game studios have been investing money into creating professional competitions with millions of dollars in prizes.

“In 2014, Robert Morris University in Chicago was the first school to create a varsity team for the game ‘League of Legends.’ In 2016, Miami University in Oxford, Ohio created the first Division I varsity esports team for ‘League of Legends’ and ‘Overwatch,’ among other games,” he said. “And, in 2017, the University of Akron in Ohio created one of the first comprehensive esports programs, forming a formal department within the institution just for esports in the collegiate space, including recreational gaming, club and varsity esports competition, all supported by one unit.”

Rutgers University currently has an established esports student organization, but Fay said there may be an opportunity for more.

“There are currently more than 200 varsity programs and more than 800 club teams all participating in the same competitions,” he said. “The determining factor is often university recognition, which would allow varsity esports teams such perks as being able to register early, additional access hours to facilities and formal support from the institution, such as allocated funds for support staff and travel.

“But, in this scenario, varsity players often have some sort of agreement with an institution, much like a varsity athlete would.”

The reality is that the majority of college students are already playing multiplayer video games for more than 13 hours each week in their dorm rooms, Fay said.

“Gaming is actually a social experience, in that online games have been found to function as a third place, with the first being home, the second being work and the third being a place in which you recreate with friends and community members,” he added. “Online worlds are now starting to become places in which young people congregate and get to know each other, and, interestingly, research indicates that gamers who develop social capital in these virtual communities are more likely to be active civic participants, volunteer and vote.”

The question then, Fay said, is how higher education institutions can use this virtual experience as a community development tool to guide the way in which students connect with each other.

The creation of a LAN center on campus, for example, could help them find a team to play with.

“The LAN center is an incredibly valuable way to make that virtual third place a physical reality where students can actually meet face-to-face to develop stronger, real-world, campus-oriented connections,” Fay said. “It allows students to remove that mask of anonymity and meet the student behind the avatars that they may already be playing with online.”

This in turn reduces toxicity online.

“By creating a physical space in which you’re actually going to know the students you’re playing against, you’re more likely to treat them like fellow humans,” Fay said. “There is accountability for student behavior in this space.”

In his experience, LAN centers also allow students to join friend groups that encourage them to study, volunteer or join other clubs, Fay said.

“They’re finding paths that they may not have otherwise chosen to take,” he added.

Esports can even help to develop social and interpersonal skills, such as in-person communication and collaboration, that are critical to any job or trade, Fay said.

This creates tremendous opportunity for the academic community to start addressing the questions that present themselves as esports continue to grow.

“Businesses and organizations that own teams are going to be looking for answers as prize pools get larger and viewership increases,” Fay said.

For example, a student studying statistics and data visualization can break down all of the aspects that contribute to peak game performance.

“Competition happens in an entirely virtual environment where everything is calculated,” Fay said.

There is also a tremendous amount to be learned about how students pay attention while using technology, for those studying sports psychology or neuroscience.

“Esports is a mental game,” Fay said. “How might it help students process information or develop mindfulness that can then impact both their personal life as well as game performance?”

Esports players can then become patients for those studying physical therapy, health and wellness, and fitness training.

“How do we protect our online connections from being interfered with, especially when there are millions of dollars at stake?” Fay said.

Then, of course, there is business development, marketing and event management.

“There are now millions of dollars to manage through media and gaming rights, sponsorships, advertisements, ticket fees and more,” Fay said. “There are also now massive live events with thousands of spectators, and someone is responsible for making those compelling and engaging for those people who normally watch such competitions online at home.”

Finally, there are the studies of game design and visual effects themselves.

“Everything from the coding to the computer engineering, from the art to marketing, has contributed to a tremendously profitable industry,” Fay said.

Rutgers’ build-out of the space started with a nearly $100,000 investment in the computer systems alone, O’Brien said.

But potential for revenue is quite possible.

“Outside groups may want to utilize our facilities,” he said.

And there is always Twitch.tv.

“Today, millions of viewers use Twitch.tv, one of the major esports broadcasting platforms, to watch personal live streams and gaming tournaments every day,” Fay said. “And Twitch.tv has worked with universities and colleges to help them create their own associated Twitch channels.

“The university can then dictate who broadcasts on it, how they receive money from advertising and channel subscriptions, and how students associate their own personal Twitch channels with the university.”

But, before Rutgers University could put the cart before the horse, Fay said it was most important that the school construct a space with enough power, ventilation and network capacity for all the equipment.

The LAN center will therefore occupy a 3,000-square-foot space in the Busch Student Center previously used as a convenience store that was operated and occupied by Barnes & Noble.

“We installed a floating floor, so that, if we find our current configuration doesn’t work six months from now, we can easily reconfigure,” Patel said. “It’s all about thinking about where we are today and where we want to be in the future.”