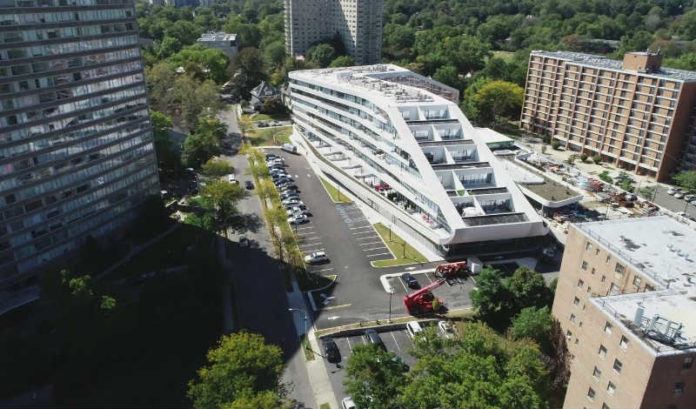 Newark-based developer Blackstone 360 was confident it could lease a luxury mixed-use development building in East Orange. Its previous successes showed that, firm officials said. But B-360 officials said they wanted to prove they could go a step further and still have success.

The 180-unit residential portion opened its first two floors in June 2019 and rapidly accelerated its leasing activity through targeted pre-leasing advertising. The building’s curved, ship-like structure is unlike anything of its kind in East Orange or neighboring towns.

Each apartment is outfitted with strand-woven bamboo floors, stainless steel appliances, modern kitchens and an in-unit washer/dryer. Residents have access to premium amenities such a garden terrace and party room, 24-hour gym, 24-hour doorman and a free shuttle to Brick Church and Newark Penn stations.

Airaj Hasan, CEO of B360, said the look was all part of the plan.

“Creating a structure of this size and scale came with its own set of challenges, but the goal was to differentiate ourselves from the standard market multifamily and take a risk with our team to deliver something unique,” he said. “Our bet paid off, and the community at large really understands and appreciates what we’ve created here.”

Alina Zafar, director of marketing and corporate relations for B360, said the property is a logical next step for the company.

“B360 engaged with architect Murat Mutlu from INOA on our previous luxury multifamily in East Orange, Essence 144, when we first began moving into a more modern, futuristic design aesthetic,” she said. “After the overwhelming response we saw there, we took it one step further at Lotus 315 and went really out of the box.

“East Orange had already proved to be a successful renter’s market for us, but the Lotus design really pushed us to the top for attracting an even wider, more diverse set of tenants. Out of our entire portfolio in East Orange, Lotus 315 has the highest household income levels, is the most ethnically diverse and had the broadest reach in attracting renters from the New York metro area.”

Hasan said B360 has an equally bullish vision for the retail component at Lotus. The ground-floor space is comprised of 33,000 square feet, complete with an end-unit drive-thru. He said the group is actively engaging grocers, restaurant and coffee shop operators, day cares and medical offices in an effort to further uplift the evolving market of East Orange.

B360 will further the expansion of its portfolio with Allure 258, the 18-story luxury high rise neighboring Lotus 315, on track to be completed in the summer of 2021, officials said.