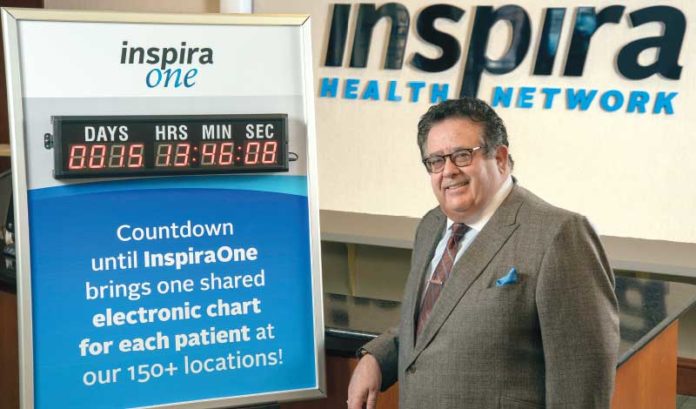 John DiAngelo, the CEO and president of South Jersey’s Inspira Health system, announced Monday that he will retire at the end of the year.

DiAngelo has been with Inspira since 2000, and recently presided over the opening of both a new hospital and new cancer center in Mullica Hill.

“This decision comes at a momentous time for Inspira, and I am immensely proud of the invaluable contributions of this organization in our community,” he said in a prepared statement. “What began eight years ago, with the coming together of South Jersey Healthcare and Underwood Memorial, has grown into a regionally recognized health care leader today, dedicated to health care quality, value and innovation. I will forever be grateful to my colleagues and staff for their relentless dedication, support and hard work. It’s been an honor to be part of this organization, and I look forward to Inspira Health’s continued growth and success.”

DiAngelo will remain at the head of the system until a successor is found. Inspira, which has medical centers in Mullica Hill, Vineland and Elmer, has retained consulting firm Korn Ferry to conduct a search. Inspira said in a news release that it expects a new CEO and president to be in place by 2021.

“It’s rare to find an outstanding health care leader like John DiAngelo,” Chairman Michael A. McLaughlin said in a statement. “His unwavering commitment to improving the health of the South Jersey community has positioned Inspira as a regional health care leader. It’s been my great pleasure to work with John for many years and, on behalf of the board of trustees, I want to thank John for his extraordinary dedication and contribution to Inspira for two decades. He has truly led the way toward a stronger health care future for South Jersey.”

Among other achievements, DiAngelo oversaw Inspira’s expansion to more than 150 access points for care, from 60 when he took over, including 10 new urgent care centers, the $34 million expansion of Inspira Medical Center Vineland and the opening of the $356 million Inspira Medical Center Mullica Hill and its cancer center, as well as the related $23 million capital campaign.

During DiAngelo’s time as CEO, Inspira also opened its Innovation Center and established a $1 million Innovation Fund to fuel potential startup programs and projects. It also has provided more than a half-billion dollars in community benefit activities and programs over the past six years, it said.

The systems has more than 1,300 physicians and other care providers, and a total of more than 6,000 employees.