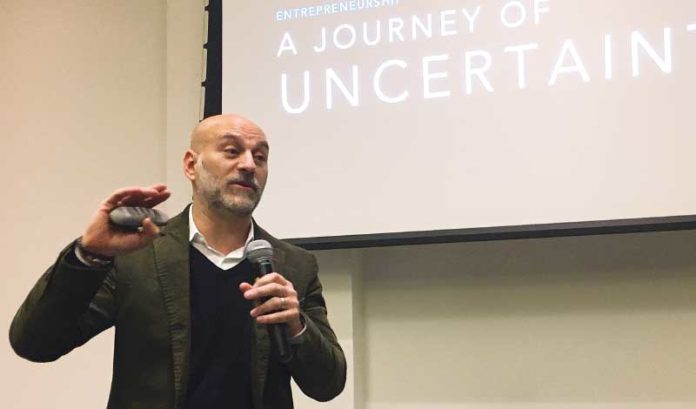 To be an entrepreneur is all about knowing who you are and being introspective, Michael DePalma, co-founder of data-as-property startup Hu-manity.co, based in Princeton, told an audience at the Morris Tech Meetup recently.

“It’s funny to think of introspection as a superpower for an entrepreneur,” he said. But, if entrepreneurs don’t know themselves, they will have a hard time. When an entrepreneur puts himself out into the world, the world will define who they think he is, so “you’d better have a pretty good idea” of who you are inside, and what you’d like the world to see, he said.

The definition of entrepreneur is an adventurer or a bearer of risk, said DePalma: “I think the best way to summarize it is to use the Hunter S. Thompson quote ‘Buy the ticket and take the ride.’”

DePalma took a circuitous route to entrepreneurship. He didn’t go to college right after high school because he couldn’t afford it. Instead, he worked at various manufacturing jobs and finally finished college. During his journey, he started several companies, including one that failed.

Entrepreneurship is an act of creativity

Entrepreneurship is an act of creativity, he said: “What’s more creative than literally building something from nothing?”

Not everyone is cut out to be an entrepreneur, according to DePalma, but that’s OK.

An entrepreneur isn’t usually a visionary in a black turtleneck pursuing his or her vision.

“In reality, you’ll be spending a lot of sleepless nights staring at spreadsheets that you don’t really want to do, but you are going to do anyway,” he said.

That’s just the nature of the entrepreneur’s journey.

Keep on an even keel

In entrepreneurship, the highs are very high and the lows are very low, and entrepreneurs who are successful have the ability to maintain a level head, he noted.

“Don’t let the highs be too high, and the lows too low,” he advised. Keep on an even keel.

Similarly, you should be more than what you do for a living.

“I think there’s a richness to the human experience, a richness to a human who does more than just what they do for a living,” he said.

That will influence how you look at the world, and how the world looks at you, he said.

Nothing is easy: “If it was easy, everyone would do it.” Also, it’s not supposed to be easy. It doesn’t matter how many times you’ve been an entrepreneur, each time you start something, there will be new challenges and opportunities.

There will be no shortage of people who will tell you it can’t be done.

“My current company, Hu-manity.co, is a company that is doing something that, A) has never been done before, and B) is extremely unpopular with people who make a whole lot of money by doing the exact opposite of it,” he said: It is an organization that allows people to own their data as property.

Be humble, he added: “Recognize that there is luck, other people, and relationships in all that you do.” Think about the people you are working with, and don’t treat them badly.

Success is how you define it. “I find it is rarely monetary,” said DePalma, who added that he had never spoken to any entrepreneurs who said they’d be great once they had a certain amount of money. As soon as you achieve that, the bar moves, he noted, but the monetary definition of success rarely grounds people.

For instance, DePalma said he has a friend with an addiction-recovery platform who defines success by the number of people he’s helped. This friend has helped 85,000 recover successfully from addiction.

Now, that’s a lot of success.

DataOnline COO to become CEO in 2019