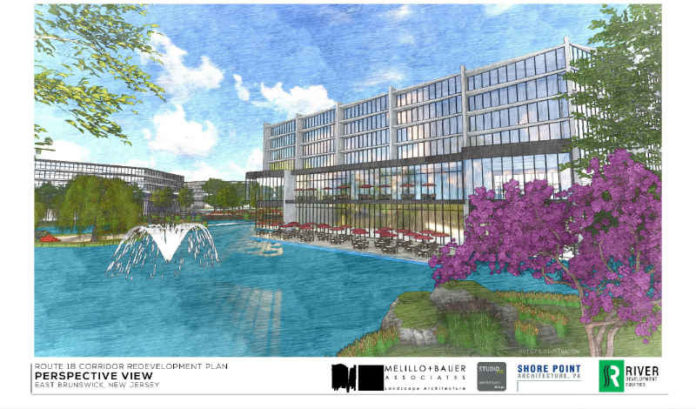 East Brunswick Redevelopment Agency confirmed Tuesday its execution of a developers agreement with River Development Equities in Red Bank and released renderings for a $500 million mixed-use, transit-oriented development along the Route 18 corridor. 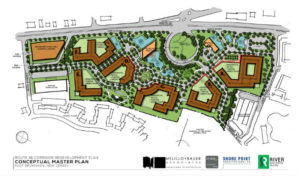 “This is the most dynamic and important project for the township of East Brunswick,” James Wendell, city councilman and chairman of East Brunswick Redevelopment Agency, said. “In 12 months, requests for proposals were evaluated, a developer was conditionally selected, several iterations of a plan were fine-tuned and refined, and we achieved a signed redevelopment agreement.”

This key step marks the beginning of the process to redevelop, revitalize and reimagine Route 18 on the northern end of the East Brunswick business corridor, said Michael Hughes, executive director of East Brunswick Redevelopment Agency, so that River Development Equities can begin to purchase the remaining privately-owned buildings on the property.

“We expect property acquisition to be completed expeditiously — I’ll say within the next three months — and we expect demolition to begin late summer,” Hughes said. “This is the first concrete step forward, and it’s truly a leap forward, into a partnership that is going to be able to shape East Brunswick not only through the next few years, or the next few decades, but also for the next generation who are going to be able to call East Brunswick home.

“We look forward to the next steps of this process to transform an underutilized and outdated area into a vibrant professional and cultural destination.”

The announcement comes more than two years after Wendell and East Brunswick Mayor Brad Cohen launched the Redevelopment Agency and received approval from the state Department of Community Affairs to declare the site a redevelopment zone. 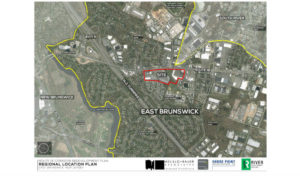 “Many of us here today remember when you couldn’t find parking spots at Loehmanns Plaza and Wiz/Gap Plaza because all of those stores were busy,” Cohen said. “But that was over two decades ago.”

The once-thriving shopping and business corridor suffered in the wake of the Great Recession and grew largely vacant due to the changing nature of retail, Cohen added.

“This commercial corridor, one that sits right at the center of New Jersey, that still sees over 100,000 cars each day, that connects New Brunswick and Rutgers to the Shore, that sits at the cross-section of almost every major highway in New Jersey, that is equidistant between New York City and Philadelphia, is in desperate need of revitalization, and that is exactly what we’ve spent the last two years doing,” Cohen said.

The idea is to transform in three phases the more than 44 acres of now-blighted property from Ruth Street to Lake Avenue into a dynamic economic engine for the township.

“We have aimed to create a true transit-oriented development which meets the needs of residents and consumers of the 21st century,” Cohen said. “We want to create a community that appeals to all age groups, including those starting out and those looking to downsize. 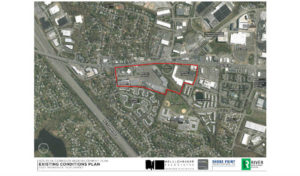 “There will be something exciting for everyone here in East Brunswick.”

With a focus on sustainability and energy efficiency, the architects and landscape architects, including Shore Point Architecture in Ocean Grove, Studio 200 Architecture in Brielle and Melillo + Bauer Associates in Brielle, will create a modern live-work-play community featuring nearly 800 apartments, ground-floor retail and restaurants, a hotel, a tech center, a medical office building, an indoor/outdoor pet facility, a commuter parking garage and a new bus terminal with service to Manhattan.

“Expectations for suburban living have shifted in recent years, with residents preferring to live in communities that offer walkable downtowns and convenient mass-transit access while still enjoying inherent suburban characteristics,” said Warren Waters, principal of River Development Equities. “The scale of this project will make East Brunswick a leader in this category and the envy of other municipalities, future residents and everyone who visits. The streetscapes will imbibe a dynamic mix of uses certain to capture the imagination and allow for all to embrace it.”

Utilizing cutting-edge architectural designs derived from cities such as Austin, Texas; Seattle; Chicago; and the California coast, Waters said further emphasis will be placed on outdoor amenities, including a public park with water features, an amphitheater, and biking and walking paths.

“We want to develop something that people want to live in tomorrow, not today and certainly not yesterday,” Waters said. “That means we are going to break the mold and do things that they are doing in other parts of the country very successfully to capture anyone that drives by, let alone who lives or works here.

“It will look and feel very different from everything else shoppers and commuters see on the highway today.”