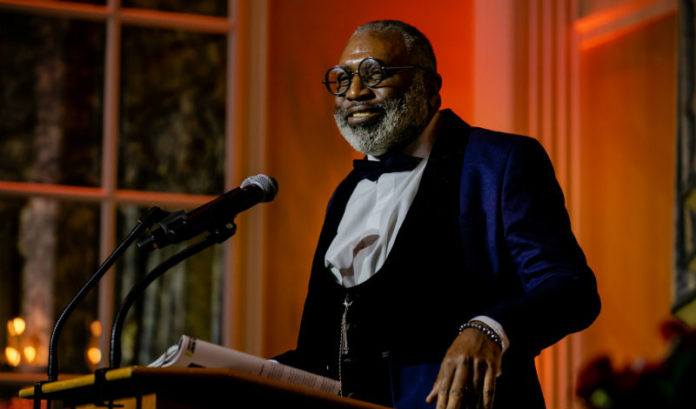 Lance McCarthy, the CEO of Global 1000, inspired the crowd at the African American Chamber of Commerce of New Jersey gala with his keynote address, providing historical details of successful black business leaders while detailing how his firm is using what he calls the “6 C’s of Success” to build a platform for success in the community.

Then, he did something better: He agreed to stick around.

McCarthy, whose St. Louis-based firm invests in black-owned companies across the country — specifically, but not limited to, technology —said he wants to bring his program to New Jersey.

“I love what I’ve seen here,” he told ROI-NJ after the program last Thursday night. “I’ve seen the energy. I’ve seen the talent. I’m going to come back and help grow it. There are opportunities here in New Jersey. I can see that. And I want to come help.”

McCarthy returned to his Missouri home by the end of the weekend, but not before holding follow-up meetings with AACCNJ founder John Harmon to discuss next steps.

The two talked about businesses in the state and started the process of identifying which ones have the opportunity to expand locally and nationally. Future conversations — and return visits — are already being discussed.

“There’s a lot we can do together,” Harmon said Saturday. “We’ve just started talking about all the possibilities.”

Talking about possibilities is how McCarthy inspired the crowd of more than 300.

“My purpose is to assist individuals, particularly those of African descent, both spiritually and economically,” he said.

An inner strength is in the DNA of African Americans — something McCarthy said is not fully appreciated.

“We have to be strong if we were able to buy ourselves out of slavery,” he told the crowd.

McCarthy talked about the success of one of the first black millionaires (Jeremiah Hamilton), one of the most famous black architects (Paul Williams) and even the first black professional baseball player — and if you think it’s Jackie Robinson, you don’t know the story of Moses Fleetwood Walker.

More than anything, McCarthy talked about how African American business leaders need to understand the world they are operating in — and have an agenda to conquer it.

“If you don’t understand capitalism, you are a foreigner in your country,” he said. “So, learn the language. Business is a language.”

It led to his discussion of the six C’s.

“If we look at the 6 Cs, I believe we can make a significant change in the black community,” he said.

McCarthy said the time is now.

“I truly believe God has ordained this time to move our agenda forward,” he said.

And he pointed to the globalization of the economy as an impetus, not a hinderance.

“It’s the global paradox,” he said. “As a world economy becomes larger, the smallest player becomes more powerful, which means there are more opportunities than ever before as we look at our objective: We need a business agenda with a social conscience.”

He retold a famous quote regarding black-owned businesses to make his point.

“If we can take the peasants from the backwaters of Europe and mold them into leaders of the world — and if, in one generation, we can take those of Asian descent and become an economic powerhouse, then truly those of African descent can rise to the occasion and rebuild this country,” he said.

That can start in New Jersey, McCarthy said.

“The hope is that we can expand some African American businesses here with equity financing,” he said. “That’s always the issue.

“If we can connect with 10 to 15 local businesses and show them how they can scale, then I’ve done my job.”