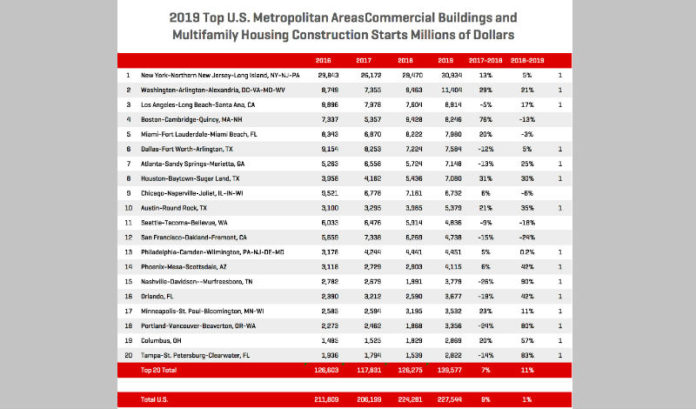 The New York Metropolitan area, which includes northern New Jersey, was named the top market market out of 20 for commercial and multifamily starts by Hamilton-based Dodge Data & Analytics, a Hamlton-based provider of software and analytics for the construction industry.

Each of the Top 10 metropolitan areas gained 8% over the year, with seven of the 10 reporting year-over-year gains.

“For 2020 multifamily construction starts are likely to continue lower as the declines broaden to more and more metropolitan areas. Meanwhile commercial starts have posted gains for nine consecutive years, but a slowing economy in 2020 will likely lead to fewer large value projects, causing national starts to pull back from their 2019 level,” Branch said.

“Multifamily starts, however, are past their peak and have entered cyclical decline. The growing divide however between the larger and smaller metro areas was stark in 2019. While commercial and multifamily starts in the top 20 metro areas in the country moved 11% higher in 2019, those metros ranked 21-50 lost 7%,” Branch said.