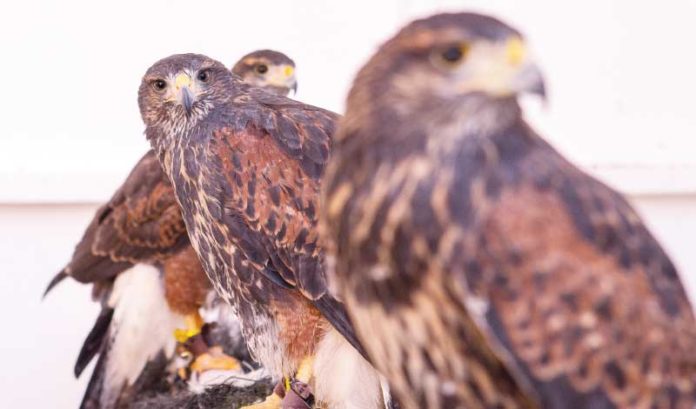 Next time you’re on vacation, or even at the office, look up, Erik Swanson said.

You may see one of his birds of prey hard at work.

Swanson, a professional falconer for more than 30 years, incorporated last year in response to a growing demand for the safe and effective deterring of nuisance birds from one’s property via the natural presence of a predator.

It’s a career Swanson found by accident, he added.

“When I was a kid, I broke a window that belonged to a canine officer,” he said. “My punishment, which my father and him worked out, was for me to wear the (protective) suit. So, I started taking bites and learned how to train the dogs.”

When the police and military began training their own narcotics and patrol dogs, Swanson began training other animals for medical procedures at zoos, including the Turtle Back Zoo in West Orange.

“At that time, there was a 1-in-10 chance of death if an animal was to be knocked out, so they’d rather do a procedure without anesthesia,” he said.

Then, the zoo curator asked Swanson if he’d be interested in training a bored and lonely eagle, so Swanson said he began reading up on the ancient sport of falconry, or, using trained birds of prey to hunt wild animals.

“And I’ve never looked back,” he said. “I’ve been training birds ever since.”

Today, Swanson uses his skills for the practice of bird abatement, so pest birds learn to avoid “hostile” areas.

Rather than destroy wildlife altogether, Swanson’s 16 birds of prey, including falcons, hawks and a Eurasian eagle owl named Ozzy, fly the skies day in and day out to scare off — and, yes, sometimes catch — bothersome birds.

Clients find this practice to be much more effective than scarecrows, owl- or dog-like statues, and spikes on rooftops, Swanson said.

“Most, if not all, of my customers say they’ve tried everything, and, even when we start, they’re skeptical,” he said.

But once the falcons fly, Swanson said, his clients become converts.

“They always extend their contracts,” he added.

Though Swanson worked with mostly airports and landfills in the past, he said his more than a dozen clients now include farms, warehouses, golf courses — and even entire municipalities.

“We’re finding new business all the time,” he said.

“There wasn’t one seagull on the boardwalk, and we didn’t kill any of them,” Swanson said. “So, we’ll be there again this year.”

They’ll also be at an undisclosed building in Atlantic City, preventing pigeons from ruining a more than $1 million specialty paint job.

“Our birds keep them off the balconies,” Swanson said.

On a smaller scale, the birds watch over a skating rink in Secaucus and a parking garage in Westchester, New York.

“Ever since a new, expensive high-rise building went up next to the garage, they’re parking more Lamborghinis than Hondas — with pigeons therefore becoming a huge problem,” Swanson said.

A smaller client can expect to pay a couple thousand of dollars per month for weekly service, Swanson said, while a larger client, such as a municipality, may be charged nearly $100,000 per month for daily, sunup to sundown service.

East Coast Falcons, after all, is a niche business.

“There are nearly 5,000 falconers in the U.S., but maybe only 400 who work professionally, and only a handful who work year-round,” Swanson said.

That’s why East Coast Falcons’ year-round flexible contracts, ranging from daily to weekly commitments, are typically set up six months to a year in advance.

And, sometimes, the business requires collaboration in the field, with East Coast Falcons working with a small team of between eight and 10 professional falconers.

“Falconers are notoriously difficult to work with — somebody that trains and hunts with falcons is most likely a hard-headed type of person,” Swanson said. “But we work things out in different ways.”

As East Coast Falcons’ success grows, Swanson said he is working to motivate and train a next-generation workforce.

“I’m looking to develop a team of falconers that is ready to go,” he said. “But you have to find the right person.”

Being knowledgeable is one thing — being dependable is another.

“But you can make good money, if you put effort into it,” Swanson said. “For example, I’m out there every day, running the show on job sites, raising, training and caring for the birds.

That’s why he considered moving to Oregon to become part of a West Coast team of falconers a couple years ago.

“My friend in Oregon owns a bird abatement business and was breaking into the cannabis industry, so he asked me to come out there and manage it with him,” Swanson said.

But, then, work on the East Coast grew steadier — and that work is the reason Swanson has stayed in New Jersey, he said.

While East Coast Falcons provides a specialty service for municipalities, especially, Swanson said he has not yet spoken with any small business resources in the state.

“It’s difficult to explain what it is we do, and we tend to get labeled right away as a pest contractor,” Swanson said. “But, to handle the birds, know how to deal with them, and fly them, you need a lot of unique experience.”

Court ruling is a victory for horse racing in the state,...