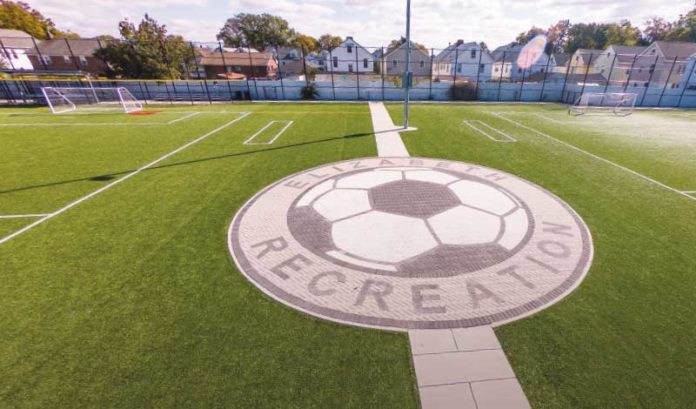 Then, he decided he wanted to help make art.

Now, Olivito, owner of PAVERART in Lindenwold, believes the manufacturer of custom-design hardscapes can play a bigger part in New Jersey’s redevelopment.

It will just take a little investment.

“When you buy a company that’s 16 years old, you essentially have to re-lay the foundation and turn it back into a startup overnight,” Olivito said. “You have to reframe employee mindsets, build new processes, invest in capacity and train teams to gear for growth.”

The goal, he added, is to grow the nearly $1 million PAVERART business into a more than $3 million company within five years.

If that were easy, everyone would do it, Olivito said — but he is ready to rise to the challenge.

“Business owners have the privilege or curse of signing the front of the checks, as well as the responsibility of stakeholder management,” Olivito said. “The question is how do we get everyone from employees to vendors to community partners to come along for the ride of accelerated business growth?”

Olivito has some experience in this.

After 17 years of working in marketing and business development for out-of-state companies such as Kraft Foods, Sara Lee and Monogram Foods, Olivito said he felt a gravitational pull back toward his home state of New Jersey.

“We then sold that business in 2017 after merging it with the No. 2 company in the country,” Olivito said.

That’s when Olivito went searching for another New Jersey-based business to buy.

“And PAVERART was on the market through a business broker network,” he said.

The company, which began by installing four decorative intersections on Rio Grande Avenue in Wildwood, uses patented abrasive water jet technology and computerized design software to turn pavers into art, allowing for any design of any size in full color.

With team logos outside of the Philadelphia Eagles’ and Carolina Panthers’ stadiums, school logos outside Louisiana State University and Clemson University, and company logos outside of locations affiliated with BMW, Lamborghini, Harley-Davidson, Pepsi and more, PAVERART also sells to every conceivable market.

“It was a great brand with a national footprint and a patent for its proprietary technology,” Olivito said. “And, thinking back to when my wife and I installed a fire pit and patio in our backyard, when I showed her the company, she said, ‘This is cool — why didn’t our contractor recommend this?’ That raised my eyebrows.”

“We’ve now got two design principles: Everything we do has to have a ‘wow’ factor — the word ‘art’ is in our name — and it must be built to last,” he said. “If it won’t outlive us as humans, we won’t make it.”

That’s why, while there are certainly competitors, PAVERART is one-of-a-kind, Olivito said.

“Thousands of people install brick patios and lay pavers, but what we do allows us to create designs that a guy wielding a saw in the field is just not able to,” he said.

It is best to picture what PAVERART does as a giant, concrete jigsaw puzzle, Olivito added.

“We manufacture the designs here, cut all the pieces and lay it out to ensure a perfect build,” he said. “Then, we package it in the order that it is to be installed and ship to a hardscape installer to take it from there.”

Residential and commercial designs range from $1,400 to more than $100,000 for more elaborate projects, such as multiple street intersections.

“But the average residential project costs about $8,000; the average municipal project, $15,000,” Olivito said.

The company, which currently employs four, is growing at nearly 20% right now. Olivito said he would like to greatly accelerate that rate.

“But, we are challenged with finding quality employees who want to grow with a small manufacturing facility,” he said.

Nonetheless, Olivito invested the profits from last year into construction at the company’s 9,000-square-foot facility in Lindenwold to accommodate the purchase of another machine to double production capacity.

“Finally, Mike and I are responsible for an elaborate outreach effort with landscape architects throughout the U.S.,” Olivito said.

Within a year, Olivito said he plans for PAVERART to be at least 30% larger.

“You have to be your own best advocate, both outside and inside the four walls of your company, talking about your business to everyone who will listen,” Olivito said. “But your employees, especially, have to believe in the success of your company, meaning better financials, better benefits — a better future than what they currently have now.”

In New Jersey alone, PAVERART has created a giant soccer ball at the Kenah Field Soccer Complex in Elizabeth; an Ocean County seal at the justice complex in Toms River; a “Proud to be an American” design at Veterans Park in Asbury Park; a school logo outside The Hun School in Princeton; a Maltese cross outside the Long Hill fire department; and many, many more.

That is why Mark Olivito, owner of PAVERART, said he is very interested in obtaining more contracts with the state to contribute more to New Jersey’s redevelopment.

“We even have a case study,” he said, citing its 40-foot compass rose at the Leonardtown, Maryland, wharf. “The town spent millions of dollars revitalizing a once-dormant wharf to become one of the fastest-growing areas in Maryland — and our PAVERART was a huge component of that.”