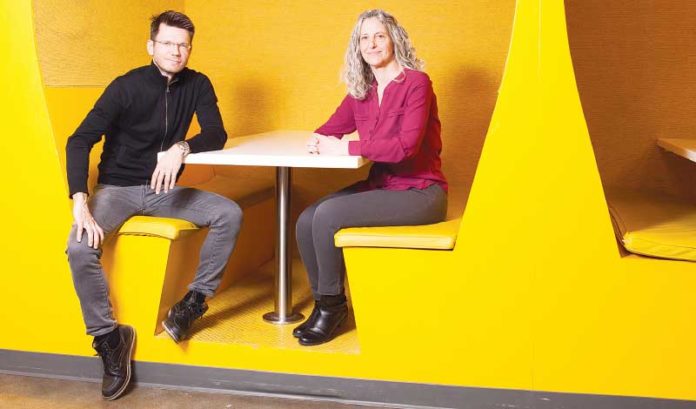 When Sembient became the second company at Kearny Point to receive approval from the New Jersey Economic Development Authority’s NJ Ignite program, the spatial analytics technology company got more than it bargained for.

Not only did it establish headquarters and become part of the built-in community at the ongoing transformative redevelopment of more than 3 million anticipated square feet of high-tech, WELL AP-certified coworking, flexible-use office, retail and event space …

It also retained its only New Jersey-based client.

“As a relatively new technology company, we’re fortunate not only to have made significant inroads into the smart building market, but also to have headquarters that immerses us in an exciting community full of fellow innovators,” Aleksandar Jovicic, co-founder and CEO of Sembient, said of Kearny Point in South Kearny.

The 3-year-old company, Jovicic added, is now on the fast track to achieving multimillion dollars in annual reoccurring revenue.

“We’re proud to have bootstrapped this company, using the revenue we generate from our clients to fund operations,” he said.

It all started when Jovicic and Elizabeth Smith Gene, co-founder and chief operating officer of Sembient, began working together at Qualcomm for nearly 10 years.

“We built a team from scratch that brought a technology through from conception to a product that we successfully shipped and licensed to other companies around the world,” Jovicic said. “We then talked a lot about doing something like that again, on the outside, without the support of a larger company, just to see if we could.”

Jovicic said he and Gene also saw a largely untapped market opportunity in which they could deliver value.

“Because Qualcomm employed nearly 30,000, space was always a precious commodity,” Jovicic said. “Finding an available conference room on Microsoft Outlook with the right infrastructure and number of seats that wasn’t freezing in the summer was a huge pain point.”

However, appearances can be deceiving.

In fact, up to 70% of global commercial real estate is typically underutilized, Jovicic added, especially with today’s growing mobile workforce.

“Real estate professionals who run these spaces pay huge premiums for square footage, as well as for the energy that goes along with it,” he said. “But we couldn’t find a turnkey system on the market that we could deploy ourselves in an office building with minimal effort.”

Classic solutions typically require the analyzing of live feeds from security cameras, Jovicic added, which is extremely costly, often ineffective due to lack of coverage and intrusive upon privacy.

“And coming from a systems background, we thought we could build a better mousetrap, sort to speak, to solve these problems,” he said.

Jovicic and Gene invested their own money to start up the computer software and hardware manufacturer in 2017.

“We were hesitant to jump on the venture capital bandwagon, having seen other startups fail because they raised seed money too early,” Jovicic said. “But we were therefore forced to prioritize the most important thing to our customers, which was actually solving problems rather than making pitches look good for investors.”

For example, in retail stores, the sensors can provide shopper traffic metrics for each department, aisle, and display, enabling retailers to better measure the effectiveness of store layouts and product marketing campaigns.

Or, such data can be used by workplace strategy teams to optimize the design, footprint and operation of more efficient and engaging corporate campuses.

“Think about what Slack has done for workplace communications,” Jovicic said. “Our goal is to do the same with the in-person workplace experience. It’s not just about how to use space more efficiently, but also about enhancing productivity and managing and enhancing the day-to-day habits of employees.”

“We’re targeting large, global companies, and, so, recently, we’ve been asked to deploy in places such as Latin America and Europe,” Jovicic said.

Still, Jovicic added, he intends to keep on building Sembient inside New Jersey.

“This is our home and we want to grow here,” he said.

Sembient established headquarters at Kearny Point in December with assistance from NJ Ignite, a program administered by the NJEDA that helps startup technology and life sciences businesses realize the benefits of collaborative workspaces by providing up to 10 months of rent support.

“Half of our rent is covered by the state, which is huge,” Jovicic said. “The NJ Ignite program afforded us the additional financial flexibility that is invaluable at this early stage for Sembient, as we continue to grow our customer base of commercial building owners and operators.”

Sembient, which employs a flexible and distributed team of nearly a dozen, said it learned of the opportunity from Carbon22, a medical device manufacturer and the first startup at Kearny Point to benefit from rent support through the NJ Ignite program nearly one year ago.

“The initiatives that the NJEDA continues to develop are extremely positive and we hope we see a lot more technology in development in New Jersey because of them,” Jovicic said. “We look forward to expanding our company with the support of the collaborative work environment at Kearny Point and the NJ Ignite program.”

Research shows that startups that move to collaborative workspaces are more likely to succeed than those that go it alone.

Sembient, which recently joined the more than 200 businesses that comprise Building 78 at Kearny Point in South Kearny, is one such startup.

“Kearny Point has been great in terms of attracting new people to work with us and having more space to do further testing and development,” Aleksandar Jovicic, co-founder and CEO of Sembient, said.

Jovicic added that Kearny Point’s ecosystem, designed to encourage companies to collaborate, interact and learn from one another, is quite perfect for his business.

“As engineers hyper-focused on our work, we can sometimes put our head in the sand without always recognizing the value of community,” he said. “Having moved here, we’re surrounded by people who already have done things like we are doing now, and we can learn from them. Being able to go next door and ask questions, get advice and even potentially share staff to help solve problems has been an unexpected benefit of working at Kearny Point.

“It is a place where startups like ours can thrive.”

New York City-based Hugo Neu Corp.’s ongoing ownership and redevelopment of the 130-acre site of the former Federal Shipbuilding and Dry Dock Co. warehouse and distribution facilities in South Kearny is currently one of the largest adaptive reuse projects in the country, representing an expected $1 billion in public and private investment into the site over the next decade.

Furthermore, Kearny Point is now one of 11 collaborative workspaces in the state approved to participate in the NJ Ignite program.