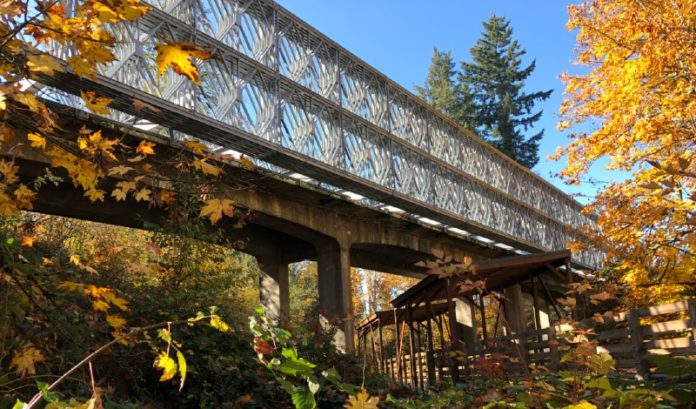 Acrow Bridge, a Parsippany-based bridge engineering and supply company, announced on Tuesday one of its modular steel bridges was utilized to restore the flow of traffic across the Spiketon Creek in Buckley, Washington.

“The decision to use Acrow’s modular steel truss bridge for this project brought significant benefits for both the local community and the state,” Jack Arizcuren, Pacific states sales manager at Acrow Bridge, said. “The rapid delivery and installation allowed for an expedited reopening of the crossing and by purchasing the structure the state has an added infrastructure asset which can be re-used whenever needed.”

The 82-year-old bridge, Acrow said, was closed for over a year after hitting the end of its useful life. The Washington State Department of Transportation shut the bridge down in 2018 after it surveyed the bridge for repairs and determined its structural integrity was compromised.

Acrow’s bridge was purchased by the WSDOT through a contract with Hamilton Construction. The detour overbridge was received in late August 2018 and was opened in December. The bridge is 240- feet long with a two lane roadway width of 24 feet.

A permanent replacement bridge is scheduled to begin construction in January 2024. Once that’s complete, the temporary bridge will be removed and stored by the WSDOT to use as needed.

“Acrow’s modular bridges, available for rent or purchase, are a great choice for detours when projects need to stay on or ahead of schedule and, at the same time, assure motorist and worker safety. They are also an ideal solution for use as permanent structures as they are manufactured with high strength, high quality U.S. steel from ISO-certified mills and galvanized to protect against corrosion,” Bill Killeen, CEO of Acrow Bridge, said.

Report: In N.J., construction workers earn 30% more than the average...

Amazon’s Edison center is busy — and will be busier on...