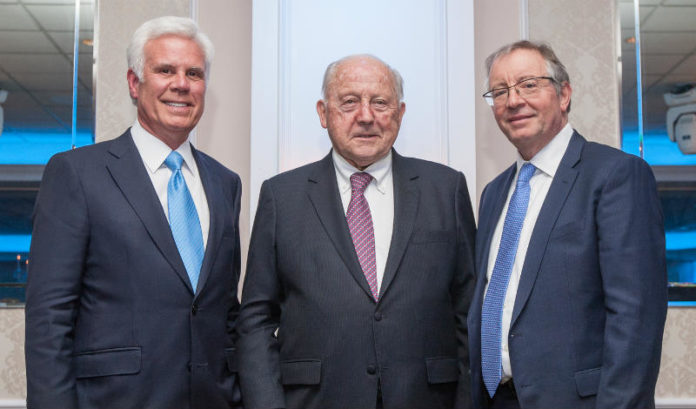 As the chairman of Amtrak, influential partner at Windels Marx Lane & Mittendorf, and adviser to a whole host of government and business officials at all levels, Tony Coscia has one of most distinguished careers in New Jersey business.

On Wednesday night, during the inaugural ROI-NJ Champions of the C-Suite event, Coscia was quick to give recognition to the two other honorees in the prestigious chairman category: The Hampshire Cos.’ Jon Hanson and Cooper University Health Care’s George Norcross.

He did so in a moving tribute.

“I really want to say something about my co-honorees in this category, because it is truly an honor for me to be in the same category as the two of them,” Coscia told the crowd of nearly 250. “Jon Hanson is the model for people who want to be involved at the intersection of the public and private sector. Jon is the person who you look to.

“(When) people in high political office, corporate CEOs had to get something done, some problem had to get solved, some issue had to be resolved — who do we get to develop the kind of consensus that most people think is not possible? Jon Hanson.

“He’s clearly somebody who we all have benefited from. There’s so many things in this state that have been built, have been accomplished because Jon had the ability to bring people together and apply a smart, thoughtful way of accomplishing things.”

Coscia then described how Norcross’ impact on the state goes well beyond his connections to the high and mighty.

“I don’t think there’s anybody in the state of New Jersey who has any authority at all, no matter how you measure it, who doesn’t know who George Norcross is,” he said. “But that’s not the reason why George should be honored here tonight.

“The reason George should be honored is because of the thousands of people who probably have no idea who George Norcross is. It’s people who are patients at Cooper, citizens of Camden, building trades employees. I grew up in this world and I can tell you that there are people out there whose lives have been dramatically improved because George Norcross got it done. He was able to bring things together in a way where so many people benefit.

“So, the true measure of a great person is someone who touches the lives of so many who never even know he existed, but whose lives have been irrevocably changed because of it.”

The thoughts of Coscia, Hanson and Norcross were the highlight of an evening where 34 C-suite executives were honored at the Bridgewater Manor. (Read more about their remarks in our Editor’s Desk column.)

Read more from ROI-NJ about the Champions of the C-Suite:

NJIT accepting applications from people of color for entrepreneurship residency

Salama, founder of billion-dollar Sabert Corp., to be honored by ACG N.J.