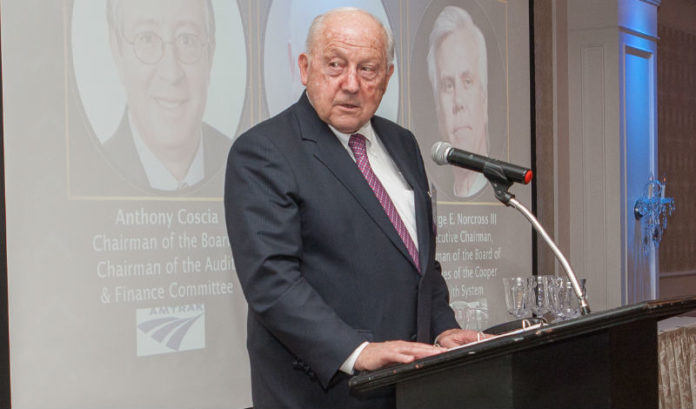 Jon Hanson loves to spin a tale. Few are better on the speaking circuit.

So, it was great to hear him tell the story about how the Atlantic City Development Corp. helped develop the land that brought South Jersey Industries and a campus of Stockton University to Atlantic City — a move that is one of the many building blocks that developers feel are bringing new life to the town.

“The head of South Jersey Gas said to me, ‘You find a site, we’ll come there,’” Hanson told a crowd of about 250 Wednesday night at ROI-NJ’s inaugural Champions of the C-Suite event at Bridgewater Manor.

“About six months later, I called him and said: ‘We got some great news. We’ve got a site. But I’ve also got some bad news: We don’t have any money.’”

Hanson — as he has throughout his career — found a way to get it done. He always does.

From helping Rutgers University get its first new academic buildings and campus space in a generation to helping turn the failed Xanadu project into an opened American Dream, Hanson has made a career out of making the impossible possible.

Norcross, through the force of his will — and some tax incentives — has helped transform Camden into a city that is attracting businesses and serving its residents.

Norcross told the audience it’s one of his greatest accomplishments as chair of Cooper University Health Care.

“Cooper has been in my family for over 40 years,” he said. “My father served on that board for many years, and I’ve served since my hair was brown in the early 1990s. It’s been the greatest honor of my life to be chair of that institution.

“Frequently, I’m asked, what’s the most exciting, incredible thing you’ve done at Cooper. There are two things I say in response. One is the vision and inspiration that I received from John Sheridan when I recruited him to come to work at Cooper.

“It was John who first said, ‘Cooper needs to lead the resurgence of the city of Camden.’ He and I were partners for many years, working hard together to take America’s poorest and most dangerous city and put it on a path to the successes that will come in the years and decades to come. Our great partner during that period was Gov. Chris Christie. This could not have happened without his leadership and with state, county and local officials. It was an extraordinary way to go into a community and make change and effect change.”

That change is deep. It has led to other great things, Norcross said.

“The second thing that’s been the most gratifying is the partnership we have with MD Anderson, which I described when we announced it as the ‘Greatest Cancer Center in the Galaxy,’” he said. “It was coming not only to New Jersey, but to Camden.

“That was the beginning of the change that took place. It’s what makes the group of executives that are here with us tonight and the many families that work with us throughout that city proud — this resurgence to provide a great education for every student and every family and to make (Camden) a safe city like the town each and every one of us live in and take for granted. That’s what makes us the most proud.”

Us. Teamwork. That was a common theme Wednesday night. Coscia mentioned it when he talked about the recent successes of Amtrak.

“In honoring me, you are in fact honoring this experiment that we like to call Amtrak 2.0,” he said. “We’re reinventing a company that’s been around for almost 50 years. But, this year, thankfully, will be the first year in its history that it turned a profit.”

The difference, Coscia said, has been a mindset.

“It’s the first year that we’ve gone to on-time rates, consumer satisfaction rates, where we have turned this company into something that proves that you can have a business operation that operates in conjunction with the government and that does it in a thorough and efficient way,” he said.

“Amtrak is an interesting company, because it is essentially a private corporation that is 100% owned by the federal government. If that isn’t a recipe for disaster, nothing actually is. So, the fact that we have turned it around with some solid people, the women and men who work at Amtrak are people who are truly committed to what has become our credo, which is: Our business is not about the trains, it’s about the people on the trains. It’s about getting from point A to point B. The trains are just the way that we do it, and that has created an incredible change in our culture and it’s something that we’re very happy to be part of.”

Read more from ROI-NJ about the Champions of the C-Suite: