Feffer has devoted much of his career to working with clients from China, Hong Kong and the Asian-American community. He served on the board of the Manhattan Chapter of the Asian Real Estate Association of America from 2013-2019 and is the Legal Advisor to the American Chinese Real Estate Society.

It has been a milestone year for Gebroe-Hammer Associates and one of its key contributors — Joseph Gehler, a member of the multifamily investment brokerage firm’s South Jersey/Greater Philadelphia Metro market team. Named this year’s Gebroe-Hammer Associates Salesperson of the Year, Gehler counts his ability to persuade the firm’s executive management team to hire someone with an interest — but no experience — in multifamily investment sales as one of his greatest achievements.

Named in memory of the firm’s late founders, Mel Gebroe and Morris Hammer, the annual peer-selected Salesperson of the Year award recognizes one brokerage professional for exceptional, consistent sales performance. Gehler is a first-time honoree within the firm and was named an Under-30 commercial real estate standout in 2018.

“Joseph Gehler has adeptly earned his stripes to ‘measure up’ to Gebroe-Hammer’s high standards for doing business by thinking entrepreneurially and on his feet,” said Ken Uranowitz, president, who announced the annual award at the firm’s 44th Anniversary reception recently held at Crestmont Country Club in West Orange. 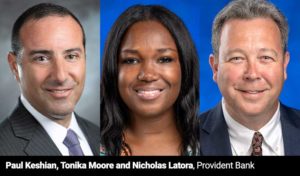 Provident Bank announced that three executives have joined the team.

Meanwhile, Tonika Moore of Neptune has joined the bank as banking center manager of its Matawan branch. Moore will be responsible for driving deposit and small business loan growth for the branch, developing sales strategies and ensuring superior customer service, as well as overseeing the staff and operational integrity of the branch.

Bioclinica, a leading provider of clinical science and technology expertise to assist the life science industry, announced that David Herron, Bioclinica’s CEO and president, has left the company to pursue other business interests.

Euan Menzies, the chairman of Bioclinica’s board of directors, will assume the role of executive chairman and interim CEO. To ensure a seamless transition of leadership responsibilities, Herron remained with the Company in an advisory capacity until the end of January 2020.

The law firm of Bressler, Amery & Ross P.C. announced the promotions of seven attorneys to principal and one to counsel. Of the promotions, 75% of the group are women.

ElectroCore Inc., a commercial-stage bioelectronic medicine company, announced that the company’s current chairman of the board, Carrie S. Cox, will resign from the board effective March 31. Cox also served on electroCore’s Audit and Nominating and Governance committees. Michael Atieh, who joined the company’s board in June 2018, will assume the role of chairman.

“I joined the electroCore board because I firmly believe in the promise of the company’s vagus nerve stimulation technology to treat a broad range of medical indications noninvasively, and improve the lives of countless numbers of patients,” said Ms. Cox. “I am proud of the progress that we have made thus far, and I leave the board believing that we have assembled the team capable of maximizing the potential of this novel technology. I look forward to following the company’s continued progress at both expanding the commercial availability of gammaCore in its approved headache indications while in parallel exploring its potential utility in additional large-market disorders where the vagus nerve’s signaling activity is implicated.”

Medspa810 announced that Greg Longe has joined the company as its new president and chief development officer. In addition to his other responsibilities, Longe will spearhead franchise sales and development. Medspa810 is a leading provider of medical aesthetics services with locations open or in contracted development throughout the United States and the United Kingdom. The company was acquired in early 2019 by principals of Princeton Ventures, a leading private equity firm with experience investing in a number of successful franchisors, including Massage Envy and European Wax Center.

Longe has over 25 years of experience in the franchise industry. He has provided C-level management to numerous franchise ventures including: Molly Maid, Mr. Handyman and his own companies, Roosters Men’s Grooming Centers, Dryer Vent Wizard, Autoqual and Drive N Style. Most recently, he served as the president and chief operating officer of Martinizing International.

Monmouth Real Estate Investment Corp. announced that Allison Nagelberg, the company’s general counsel, has retired from the company. Nagelberg had been a highly respected member of Monmouth’s executive team for nearly 20 years. Chairman Eugene Landy commented: “Allison has represented Monmouth with integrity, devotion and an uncompromising work ethic for two decades. During Allison’s tenure as general counsel, she has played a critical role in the company’s success. We thank Allison for her two decades of service and wish her every success in all of her future endeavors.”

Monmouth also announced that the position of general counsel will be filled by Michael Prashad, who has been serving as the company’s in-house counsel. CEO and President Michael Landy stated: “Mike has been working closely with Allison for the past five years, and we anticipate a smooth transition as Mike assumes the role of general counsel. Mike has a deep understanding and appreciation of our business philosophy, which has served Monmouth well over our 52-year history. I am very confident that Mike will succeed in his new position.”

“When we launched our Medical Professional Mortgage earlier this year, we built out a robust program that included a dedicated operations team expressly trained to process, underwrite and close these loans,” said Scott Lindner, national sales director for TD Bank Mortgage. “Bringing on a specialized group of seasoned loan officers was our next priority. J., Stephanie and Jim have decades of experience and true expertise in helping medical professionals achieve homeownership. Their knowledge, combined with our mortgage product set and infrastructure, will allow TD to better serve more physicians and dentists across our footprint.”