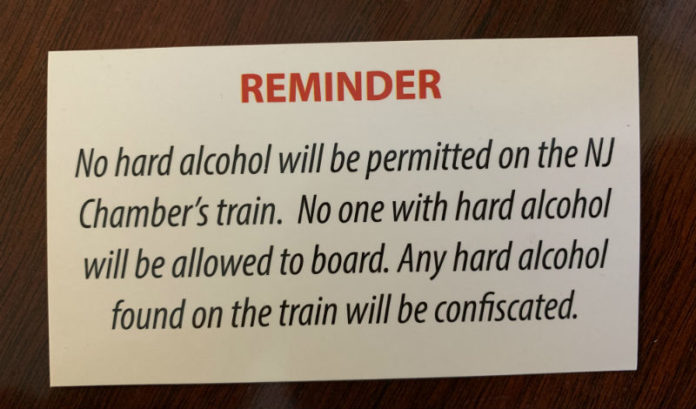 The Walk to Washington networking train ride features plenty of business cards changing hands. One new one for 2020 has a pointed message: No hard alcohol allowed.

The cards are part of the New Jersey Chamber of Commerce’s widely publicized effort to combat sexual harassment on the trip — actions it has taken in the wake of a New Jersey Advance Media report that described issues surrounding politics and political events in New Jersey.

Other steps the chamber is taking for Thursday and Friday’s train ride and Congressional Dinner include:

State Sen. Loretta Weinberg (D-Teaneck), who is heading up a panel on the toxic culture for women in Trenton in the wake of the report, said recently that she encourages people to attend the Walk to Washington.

“The New Jersey Chamber wants to be a leader in improving the culture at conferences like our Walk to Washington, and make them safer and more welcoming for all,” Tom Bracken, the chamber’s CEO and president, said in a statement. “We are gratified that Sen. Weinberg recognizes that the New Jersey Chamber is taking the issue of sexual harassment ‘very seriously’ and that she said this year’s Walk to Washington ‘is probably going to be one of the safest trains to be on.’”

The chamber noted it is working with the New Jersey Coalition Against Sexual Assault to develop both initiatives for the Walk to Washington and a series of sexual harassment prevention seminars to be held throughout the state.

Georgia on his mind: Murphy on why Senate election results could...