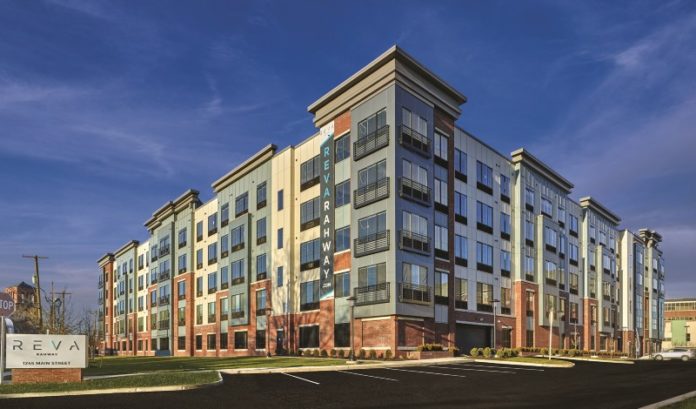 Leasing is underway at the five-story building, developed by AST Development and Sterling Properties at 1245 Main St. The developers said more than 70 of the 219 homes have been leased within the first two months of availability.

REVA has a mix of studio, one- and two-bedroom units starting at $1,610 with grand opening incentives that include one-month free rent on a 13-month lease. Residences are available for immediate occupancy.

“With the opening of REVA, we’ve introduced a new luxury residential option to a downtown that is rich in history and culture, and clearly on the rise,” Robert J. D’Anton, president of AST Development, said. “All of the elements of a vibrant, urban community can be found in Rahway, which boasts a lively mix of shops, dining, a Hilton branded hotel and access to fast and efficient public transportation.

REVA is the second upscale apartment complex the developers placed in Rahway, they said, following Metro Rahway in 2014.

“Its downtown has experienced substantial economic and business growth in recent years spearheaded by progressive municipal initiatives that have this city well positioned to emerge as the Union County leader in retail, art, entertainment and lifestyle.  We’re excited to add a signature rental building to this flourishing residential and business center,” Hollenbeck added.

The property is within two blocks from a New Jersey Transit train station and is easy accessible from the New Jersey Turnpike and the Garden State Parkway.

“The appeal of living in Rahway is growing strong, with renters feverishly attracted to its vibrant downtown, strong sense of neighborhood and the ultimate in commuter conveniences,” Shane Soranno, director of development for AST, said.  “REVA will complement those desirable characteristics with elegantly-designed homes and a complete offering of amenities.”

For real estate pros, landmark white paper was more than worth...