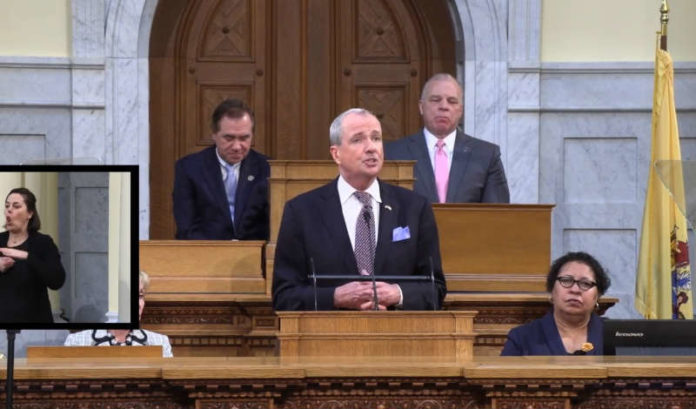 About 20 minutes into his budget address — after he heartfully thanked those in attendance for the well-wishes he received following his weekend announcement that he likely has cancer, and following his standard stump speech of how New Jersey can be both progressive and pro-growth — Gov. Phil Murphy addressed the biggest issue in the state, and his biggest dream: Funding the pension and increasing the millionaire’s tax.

And he did it with some numbers that are hard to argue.

After announcing his budget for Fiscal 2021 includes an additional $794 million increase in pension funding, he announced that the state will make an extra $279 million payment into the pension system this current fiscal year.

“This is a roughly $1.1 billion increase in our overall pension payment,” he told the Legislature. “This administration will have put more back into the system in just three years than the preceding one did in eight.”

Then came the call.

“We can keep this progress going, but only with recurring and sustainable revenues,” he said. “And there is no better alternative than a millionaire’s tax. It’s the way we both ensure tax fairness for our middle class and fairness to the dedicated rank-and-file women and men of our public workforce.

“After all, the millionaire’s tax is a matter of fairness to our middle-class homeowners and renters, our seniors and the countless working families reaching to pull themselves up and into the middle class.”

“The property tax is the most unfair, regressive and cruelest of taxes,” he said. “A middle-class family in Merchantville or Milford or Moonachie, after all, pays a greater percentage of their income in property taxes than a millionaire anywhere else.

“It’s easy to see how our middle class can feel cheated. Their tax burden is real and, when put side-by-side with that of the wealthiest in our state, proves to be the exact opposite of fair.

“It isn’t the wealthy who bear the burden of our tax system — it’s the middle class.”

Then came the ask.

“Asking the wealthiest 22,000 New Jerseyans to pay two cents more, in income tax, for every dollar they make over $1 million, so we can provide nearly $500 million more in property tax relief to New Jersey’s families is simple fairness,” he said.

Murphy has pushed for an increased millionaire’s tax since the campaign trail. And he continued to push his narrative that increasing the taxes on the wealthiest will not drive them out of the state.

“There is not one iota of hard economic evidence that has proven the myth of millionaire tax flight, and, yet, I have heard from countless middle-class families and seniors, who are afraid that they may have to leave because of high property taxes.

“They should be our focus in making New Jersey more affordable and tackling income inequality. We go nowhere without our middle class, and, right now, they’re the ones getting squeezed.

“Let’s be clear — a millionaire’s tax doesn’t punish the rich; it lifts up the middle class and that’s good for everybody.

“So, I thank the Senate President (Steve Sweeney) and welcome his willingness to embrace a millionaire’s tax in this budget. When we have tax fairness, we can continue our historic investments in our pension systems and in our middle-class families.”

Murphy’s budget speech included the following items on his wish list, as provided by his administration:

Murphy knows that this is only a wish list and said as much in his speech.

“I know that the budget I receive back won’t look exactly like the one I am handing you,” he said. “But, I know that by working together, we will arrive at a budget that continues to restore the faith that we can work together for the common good, and that we can deliver upon the promises we’ve made to our middle-class families — and, just as importantly, to those striving to join our middle class.”

Murphy and the Legislature have to enact a budget by June 30.

We’re sick of the abuse of terminal-leave pay