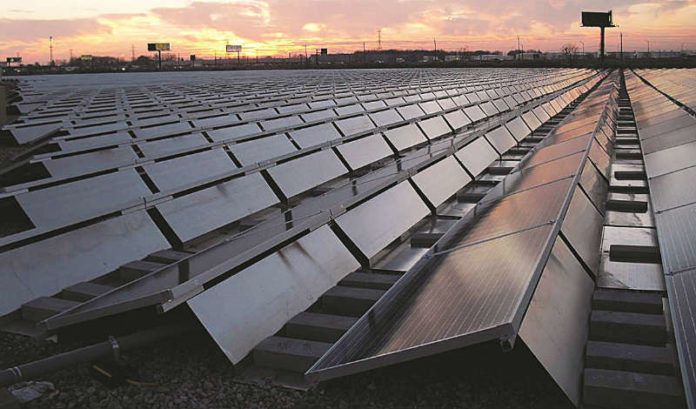 In the first few minutes of talking about the solar sector over the phone, Jesse Grossman had to hurriedly stash his luggage.

The leader of a Jersey City-based solar power provider was in the midst of zooming across the country. That said a lot about the spreading demand for these renewable projects.

The truth is, the embrace of solar has become a global phenomenon. And, as the always-on-the-go Grossman will tell you, it’s also part of an increasingly intertwined global supply chain.

But that means something like a virus outbreak on the other side of the planet can cast a shadow over everything.

Grossman is founder and CEO of Soltage, which develops, finances and then oftentimes operates large renewable energy projects. He said the coronavirus outbreak in China could end up being an event of significance for the solar industry.

“These days, we have to think far more about global trade patterns and how that impacts our industry,” he said. “So, this disease that started a continent away is likely going to affect delivery times of solar products needed in the United States. A lot is still coming to light — and I don’t know if anyone is sure of the full scope of it yet.”

The price of solar systems, which clean energy advocates regularly boast is in a constant decline, could potentially head the opposite direction if there ends up being a shortage of the primarily China-manufactured components used in the production of the panels. The potential stalls in the construction schedules for projects — as the disease’s spread grinds manufacturing production to a halt in China and other affected countries — carries cost implications as well.

An industry insider, one who was familiar with the purchasing of solar panel supplies but did not want to be identified, said that’s because one of the primary current concerns of major solar infrastructure investors is how these delays might impact valuable tax savings.

At the stroke of midnight last New Year’s Eve, a federal tax incentive for commercial and industrial solar projects dropped from 30% to 26%. When it comes to high-dollar, large-scale projects, that sort of incentive reduction could prove meaningful.

The solar expert said the IRS has a legal process called safe harbor that allowed those buying solar systems to lock in last year’s 30% tax credit. The problem now? There are rules for how quickly the solar panels have to be delivered and constructed at a site in order to claim the credit.

The expectation is that production delays will interfere with those deadlines. The anonymous insider has heard from solar investors that they’re exploring the possibility of invoking “force majeure,” a clause that nullifies the regular terms of a contract if an unavoidable catastrophe occurs.

One caveat that those in the sector are quick to give is that the manufacturing base for solar panels has already started migrating away from China as a reaction to the talk of a trade war and the resulting tariffs. Panels are being imported and assembled outside of China, in places such as Malaysia, Singapore, Thailand and South Korea.

But there’s still a lot of materials farther upstream in the supply chain used to create the panels — the glass, wafers and aluminum frames — that come directly from China, sometimes from cities such as Wuhan in the Hubei province of China, where the disease reportedly originated.

Besides those residing in the Chinese cities with heavy manufacturing quarters being under quarantine orders, the country’s officials have extended the New Year holiday to deal with the impact of coronavirus. Manufacturing facilities responsible for the parts used in solar panel production do hold onto several months’ worth of inventory, which means solar system providers may not know for some time what the exact impact on timing or price will be.

Lyle Rawlings, CEO and president of Flemington-based Advanced Solar Products Inc., implied those in the industry are hoping for the best, expecting the worst.

“Due to the fact that there were already tariffs introduced on products out of China, these modules could be doubly hit in terms of price,” he said. “So far, we haven’t heard anything concrete in terms of price, but that doesn’t mean it won’t happen.”

What’s promising, Rawlings said, is that the industry was able to weather the introduction of tariffs, continuing the trend of reduced prices of solar systems regardless.

For that reason and others, while those in the industry may share concerns about how this more recent strain on the global supply chain could turn out, they haven’t shed any optimism about the position solar will have in the energy market.

In the interim, Rawlings and Grossman were both excited to report that solar is making inroads into the Carolinas, Georgia, Florida and other states where it was once considered a political nonstarter.

“The demand is very apolitical now,” Grossman said. “It’s now seen as one of the most efficient sources of power to buy, certainly beating out traditional power sources. We’re able to help find good opportunities for states that wouldn’t traditionally be associated with solar energy. States are seeing that it just makes economic sense.”

Those in the solar sector are always ready to extol state leaders’ support … especially when it’s in fine print.

So, none of the New Jersey solar energy aficionados were displeased with the release of Gov. Phil Murphy’s Energy Master Plan, which outlines a strategy for the state to transition to 100% carbon-neutral electricity generation by 2050.

But business associations haven’t shared that enthusiasm, with groups such as the New Jersey Business & Industry Association criticizing the potential costs for ratepayers and businesses.

Board of Public Utilities President Joseph Fiordaliso, whose organization worked to develop the plan in partnership with other state agencies, admitted that “green energy is expensive.”

“There’s no getting around that,” he said. “But, as we go on, it’s getting cheaper and cheaper. As an example, you can put in a solar installation today that’s half the cost it was in 2008.”

The view of Fiordaliso, advocates for clean energy and other state leaders is that the cost question is offset by the thousands of jobs renewable projects are expected to bring to the state.

“You have to look at the economics of green industry, as far as the ancillary industries it supports and the workforce opportunities it creates,” he said. “Sometimes, I think as a society we’re only concerned about what’s the cost. And it is a concern — we work very prudently and methodically to protect ratepayers every step of the way. But we also should look at the whole picture.”

Part of that larger picture is how climate change has been anticipated to have an effect on the Garden State. The Department of Environmental Protection and Rutgers University late last year released a study that projects sea level in New Jersey could rise just over 6 feet by 2100.

According to those projections, the coastal Atlantic City could experience high-tide flooding about 240 days per year.

Given the cost of not doing more, Fiordaliso conveyed that it’s hard to please everyone.

“Because environmentalists tell us we haven’t gone far enough, and then business interests tell us we’ve gone too far,” he said. “So, it actually makes me think, hey, maybe we’re right on the course here.”