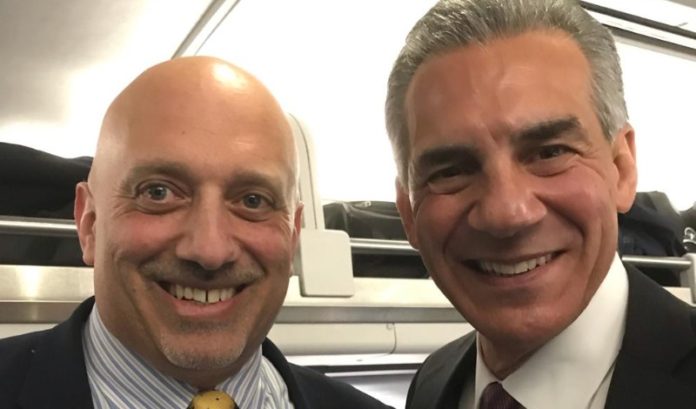 Ciattarelli, an announced Republican candidate for governor in 2021, has more than a year to perfect his message. He’s eager to take advantage of the time, especially when it comes to interacting with the business community.

“It’s really important to have an ongoing conversation with the business community,” he said. “They’re at ground zero, they know what they are up against in terms of what New Jersey’s business environment is like. So, I’m here to talk with them and learn more about how we can improve New Jersey’s economy.”

Ciattarelli, a former assemblyman who failed to secure the Republican nomination in 2017, essentially has been campaigning since Gov. Phil Murphy was elected. He feels that will help him in his quest.

“I think, if you want to be governor, you have to demonstrate a certain energy,” he said. “And you use that energy to be out in the community talking to people. I always tell people, as an elected official, your first job is to listen. That’s how you learn what it is we need to do to make things better.”

His time out in the community apparently is helping his name recognition. Even though Ciattarelli does not currently hold a public office, he was the second choice of responders in the unofficial ROI-NJ train poll when asked: Who is the most important/powerful/influential Republican in the state?

Ciattarelli earned 24% of the responses. He trailed only Assembly Minority Leader Jon Bramnick (R-Westfield), who was given the nod by 28% of respondents.

In all, six Republicans were noted, including two who were somewhat surprising: state Sen. Steve Oroho (R-Sparta) and Port Authority of New York and New Jersey Chairman Kevin O’Toole. Both were mentioned because of their ability to get things done.

“Oroho has proven he can work with (Senate President Steve) Sweeney (D-West Deptford),” one responder said. “And you can’t get anything done in this state without being able to work with Sweeney.”

The person who picked O’Toole noted his productivity.

“He’s actually getting things done at the port,” the person said. “He’s having impact. What other Republican can you say that about?”

Who is the most important/powerful/influential Republican in the state?