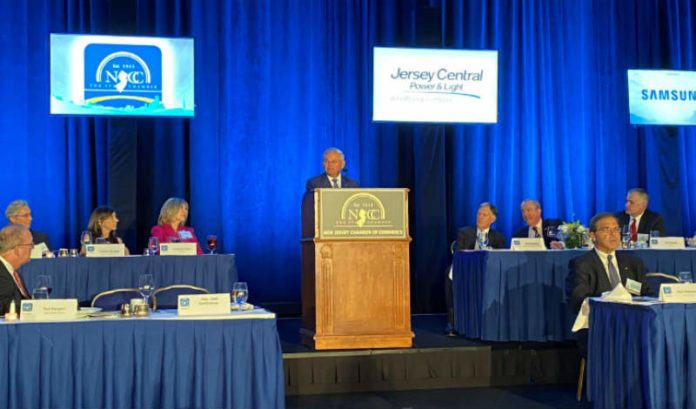 The biggest applause during U.S. Sen. Bob Menendez’s speech at the Walk to Washington Congressional Dinner last Thursday came at the easiest line: “I, for one, am committed to never see drilling take place in the shores off of New Jersey in the Atlantic Ocean,” he said.

The audience of some of the biggest and most influential business leaders in the state clapped and cheered. Who’s not in favor of protecting the environment?

But who is going to do something about it?

That was Menendez’s (D-N.J.) challenge to the crowd during a 20-minute speech in which he detailed how New Jersey is impacted by climate change as much as, if not more than, every other state in the lower 48, he said.

“When it comes to advocating for climate solutions, I’ll always do my part,” he said. “But I want everyone in this room to ask themselves: Are you doing yours?”

Menendez, who in years past has used the New Jersey Chamber of Commerce’s dinner to encourage business leaders to make a stand on issues such as immigration and gun control, used this year’s event to talk about climate change.

He called it “perhaps the greatest long-term threat to the security and prosperity of our state, our nation and even our world.” And he said congressional leaders — especially Republicans — needed to be encouraged by the business world to take action.

“Many of them, when I speak to them, say they understand, but they fear the political consequences of going against the grain,” he told the audience. “It won’t be Democrats like me who will change their (votes), it will be leaders like you.

“Many of you have extensive footprints in other states. Imagine if you raised climate change to those public officials at your next meeting. Imagine if they couldn’t count on your PAC contributions if they continued to deny basic science. Imagine if companies in every sector, not just energy, made climate change a centerpiece of part of their lobbying effort.”

“(There was) JPMorgan’s recent decision to suspend lending for drilling in the Arctic,” he said. “I’d say it’s time to even think bigger: We must invest in the green energy of the future rather than the dirty energy of the past. We have to think of the influence inside of this room. You are the innovators, small business owners, investors, business leaders. I’ve said it before and I’ll say it again: When you take principled stands, it echoes throughout the halls of Congress. It turns heads. It makes policymakers think twice.”

“According to Rutgers University‘s research, over the last century, sea levels in our region rose almost a foot and a half, compared to 7.6 inches worldwide,” he said. “And they will continue to rise until we take action.

“I don’t need to tell anyone in this room that the Jersey Shore is a national treasure. We must protect it. Millions of New Jersey families depend on a safe climate and a healthy coast to support everything from our tourism and commercial fishing industries to coastal properties valued at over $800 billion.

“But the raging wildfires and more powerful storms with consequences of unchecked climate change are not up for debate. We, in New Jersey, have seen it firsthand. We bore the brunt of Superstorm Sandy. We watched deadly storm surges wipe away entire neighborhoods, powerful floods submerge small Shore towns and large cities with critical infrastructure taking a beating.”

There is a path to change, Menendez said.

“The U.N. intergovernmental panel on climate change says that we can prevent such things, so long as we cut carbon emissions nearly in half by 2030 and net zero emissions by 2050,” he said. “The cost of doing nothing far outweighs the cost of taking action. Superstorm Sandy alone inflicted $72 billion worth of damage, and each year without action our targets get harder to reach.

“Consider this: If the world aggressively had acted back in 2010, we would have only had to reduce carbon emissions by 3.3% per year. But, today, we’re asked about cutting emissions by more than 7% per year between now and 2030. So, we can’t afford another lost decade. We have to answer the climate crisis.”

And he saluted those in the room who have made steps in the issue.

“I want to commend those who are already taking action in our state, from Gov. (Phil) Murphy’s emphasis on making New Jersey a climate leader to PSEG’s efforts to incorporate more renewables in their energy mix and similar investments being made by JCP&L,” he said. “But we must do more.”

Menendez talked of how clean energy can help build the New Jersey economy.

“We could create thousands of new good-paying Jersey jobs by dramatically investing in renewable energy,” he said. “Take the wind power company, Ørsted, which opened an Atlantic City office in 2018.  Their average 2-3 year construction project creates 1,000 construction jobs per year in addition to over 100 permanent jobs keeping those wind turbines turning for the next quarter-century.

“That’s one of the reasons I’m fighting for the offshore incentivizing wind power act to help make New Jersey a leader in offshore wind. As a member of the Senate Finance Committee, I’m seeking to incentivize, particularly in our state, but elsewhere in the country, these renewable energies as a way to balance off the marketplace and create an opportunity for greater investments from the private sector to do so.”

But, he said Congress can only do so much. The corporate sector, Menendez said, must do its part.

“The history books may say that 2020 is the year the tide began to turn because of all of the alarms coming together, because of all the elected officials willing to stand up for clean energy, because of corporate leaders willing to put their dollars, their voices, their companies behind solutions, because of everyday New Jerseyans who stood up for clean air and water, for environmental justice, for sustainable communities and who demanded a brighter future for their children,” he said.

“Let the brighter future start right here, tonight, in this very room. Let us keep the Jersey Shore not only in our hearts, but in our acts. Let us harness the innovation that is uniquely New Jersey. Let us seize the day and the opportunity so that we bequeath to the next generation of New Jerseyans and Americans the same type of environment we have come to enjoy and take for granted. We can take it for granted no more.

Business owners have one (specific) problem with Murphy

Digital bubbles: Take off your earbuds

Walk to Washington: If perception is reality, Murphy’s economic vision has...